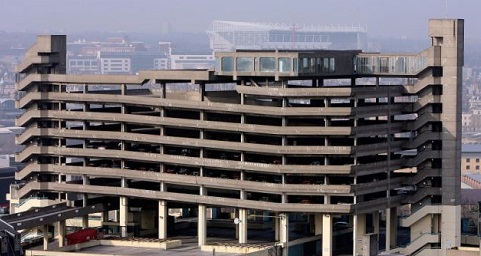 A car park is a designated area or building in which cars and other vehicles can be parked and left temporarily. In American English, it is referred to as a ‘parking lot’. Car parks are a common feature of the built environment, and often adjoin shopping centres, public buildings, schools, sports and entertainment venues, and so on. For more information, see Car park.

A multi-storey car park (MSCP) is a stacked car park that has multiple storeys, may be enclosed and can be an independent building.

MSCPs must be designed with regard to the heavy and varying loads and other physical stresses that are imposed by moving vehicles. The most common structural system for MSCPs is a precast concrete frame or post-tensioned cast-in-place concrete frame. This involves structural wall panels, floors, beams, slabs, stairs, and columns. The design aim is to achieve as large a floor span as possible without requiring supporting columns as these restrict the available area for parking. The frame may be kept open to the elements or a façade can be installed to enclose or partially enclose the interior.

In terms of lighting design for new MSCPs, it must comply with BS 5489-1: 2003 and BS EN 12464-1:2002, and emergency lighting to pedestrian areas must comply with BS 5266-1. Lighting design must consider the prevention of crime, e.g. by avoiding spaces that are in shadow. Painting roofs and walls white or using polished concrete finishes can allow the number of luminaries to be reduced, thereby reducing the energy consumption of the building and maintenance costs.

Other design measures that can be incorporated to try and prevent crime include treating vulnerable areas with anti-graffiti coatings, use of ‘hostile architecture’ features, climbing plants, CCTV systems, access control systems and so on.

MSCPs are not commonly noted for their high quality of architectural design but there are a handful of exceptions. Two notable examples are the celebrated, yet under-threat, Welbeck Street car park in central London, and the car park attached to the Preston bus station. The Trinity Square car park (see top image) was both celebrated and reviled for its iconic Brutalist design, but was demolished in 2010.

Retrieved from "https://www.designingbuildings.co.uk/wiki/Multi-storey_car_park"
Create an article