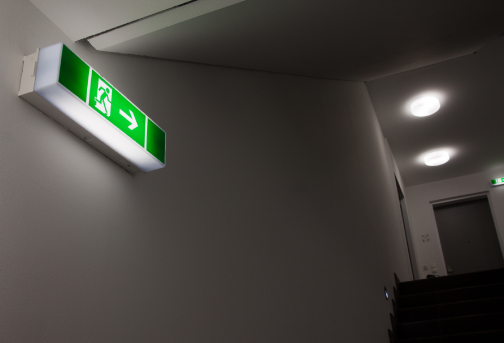 Emergency lighting is installed in buildings in case of a mains power failure and provides sufficient illumination to allow occupants of the building to evacuate safely. Types of emergency lighting include; emergency exit signs, recessed fluorescent lights, powerful halogen emergency spotlights for larger spaces, emergency ceiling lights and downlights, and so on.

The Regulatory Reform (Fire Safety) Order 2005 requires that 'emergency routes and exits requiring illumination must be provided with emergency lighting of adequate intensity in the case of failure of their normal lighting.'

The requirement does not apply to domestic premises.

Approved document L defines emergency escape lighting as '......that part of emergency lighting that provides illumination for the safety of people leaving an area or attempting to terminate a dangerous process before leaving.'

In addition to the requirement to illuminate emergency routes and exits, open area lighting may be provided to allow occupants to reach an escape route, and where occupants are involved in activities that may present some danger if they are not completed, there may be high-risk task area lighting. There may also be standby lighting to allow occupants to continue with their normal activities in the event of a power failure.

Emergency lights are powered by back-up batteries. The lights detect when mains power has failed and immediately switch to using the back-up battery. The battery should be capable of powering the light, for a defined period, but as a means of conserving power, the light output may be reduced, sometimes to just 10% of the normal output.

The Fire Precautions (Workplace) Regulations 1997 and BS 5266 part 1 require that building owners test emergency lighting regularly and maintain them in proper working order. Light fittings have a green LED indicator which shows they are charged and functional.

There are three basic types of emergency light fitting:

This type of fitting is designed to operate as a normal light fitting, to be lit continuously and to be controlled along with the other lights in the area. However, if power fails the maintained emergency fitting will continue to operate at a lower light output level. This type of lighting is commonly used in public buildings such as theatres, cinemas and shopping centres.

This type of fitting is normally switched off, but is designed to switch on automatically in the event of a mains power failure. The batteries are continuously charged. These are typically fittings such as emergency exit signs which are not required as part of general lighting. They are commonly used in workplaces such as offices and factories, where there may be more occupant familiarity with the building and the escape routes.

Includes two lamps, one operating on a mains supply, and the other operating in the event of mains power failure from a battery source.

Fittings may be self-contained, with their own batteries, or may be powered from a central battery source.

They can have varying durations for which they are able to remain illuminated following a mains power failure, such as 1 hour, 2 hour, 3 hour and so on.

They may provide different levels of illumination. See below.

The specification for emergency lighting will depend on the area it is intended to illuminate.

A designated corridor or other escape route must be unobstructed and, during an emergency, be lit to a minimum of 1 lux.

As stairwells provide increased levels of hazard than unobstructed spaces, they must be lit during an emergency to a minimum of 2 lux.

Retrieved from "https://www.designingbuildings.co.uk/wiki/Emergency_lighting"
Create an article