For many years the conventional method of interior lighting for workplaces was by ‘general illumination’. As lighting was not expensive to purchase, install or operate, the principle was to provide illumination over the whole floor area with a high degree of uniformity. This enabled plants or furniture to be positioned anywhere in the space and easily moved without recourse to changing the lighting array. 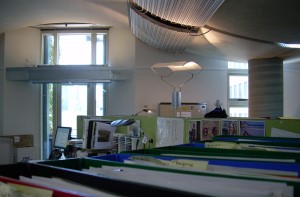 However, for the past decade UK lighting codes and standards have recommended not ‘general’ but ‘task’ lighting. The significance of this change has either been ignored or gone largely un-noticed as the illumination values were basically the same. The new concept recognised that the main critical visual task is only carried out over a small part of the total floor area.

The rest of the space is used for circulation, storage, filing and similar activities all of which are less demanding in terms of illumination. Lighting the whole area to the highest illumination required can use about a third more energy than matching the illumination to the different activities.

Energy costs are continuing to rise and therefore providing the right amount of light only where it is needed is beneficial both economically and environmentally. Also, variation in illumination can make the space visually more interesting than overall uniformity.

Normally the reason for still providing ‘general’ illumination is because the building is a speculative development and there is no client to determine the furniture layout, or simply that the layout has not been decided yet. Potential tenants need to be aware that for lighting to be visually efficient the equipment should be electrically efficient and the lighting design should suit the activities across the space. Providing light where and when it is not needed is inefficient regardless of lumens per watt performance of the luminaires.

Recommended illumination levels in the past were based upon the need to determine detail in the visual task, together with the amount of contrast critical work and the importance of colour discrimination. Recently there have been massive changes to how we read the written word with print on paper largely being replaced by self-illuminated screens of computers, tablets, telephones, information signs, cash registers, etc. At the same time there has been the move towards ‘hot desking’. No longer does a space have a constant lighting need. The visual task performed at any point will depend upon the occupant at any one time.

Does this mean we should revert to general illumination? Or does the lighting of our buildings require a fundamental rethink so it is more appropriate to today’s sometimes conflicting needs of energy conservation, use of electronic media devices and flexible occupancy of spaces?

Modern lamps have long lives and therefore lighting is only infrequently changed. Installations over twenty years old are not uncommon, a time span when most other electrical equipment will have been replaced several times.

[NB: 'Accent lighting' is the ‘...highlighting of displayed merchandise or the features of a store or building.’ Ref. BRE’s The essential guide to retail lighting.]

This article originally appeared as a --BSRIA blog, Taking lighting to task, published in September 2011 and written by Richard Forster.

Retrieved from "https://www.designingbuildings.co.uk/wiki/General_lighting_v_task_lighting"
Create an article