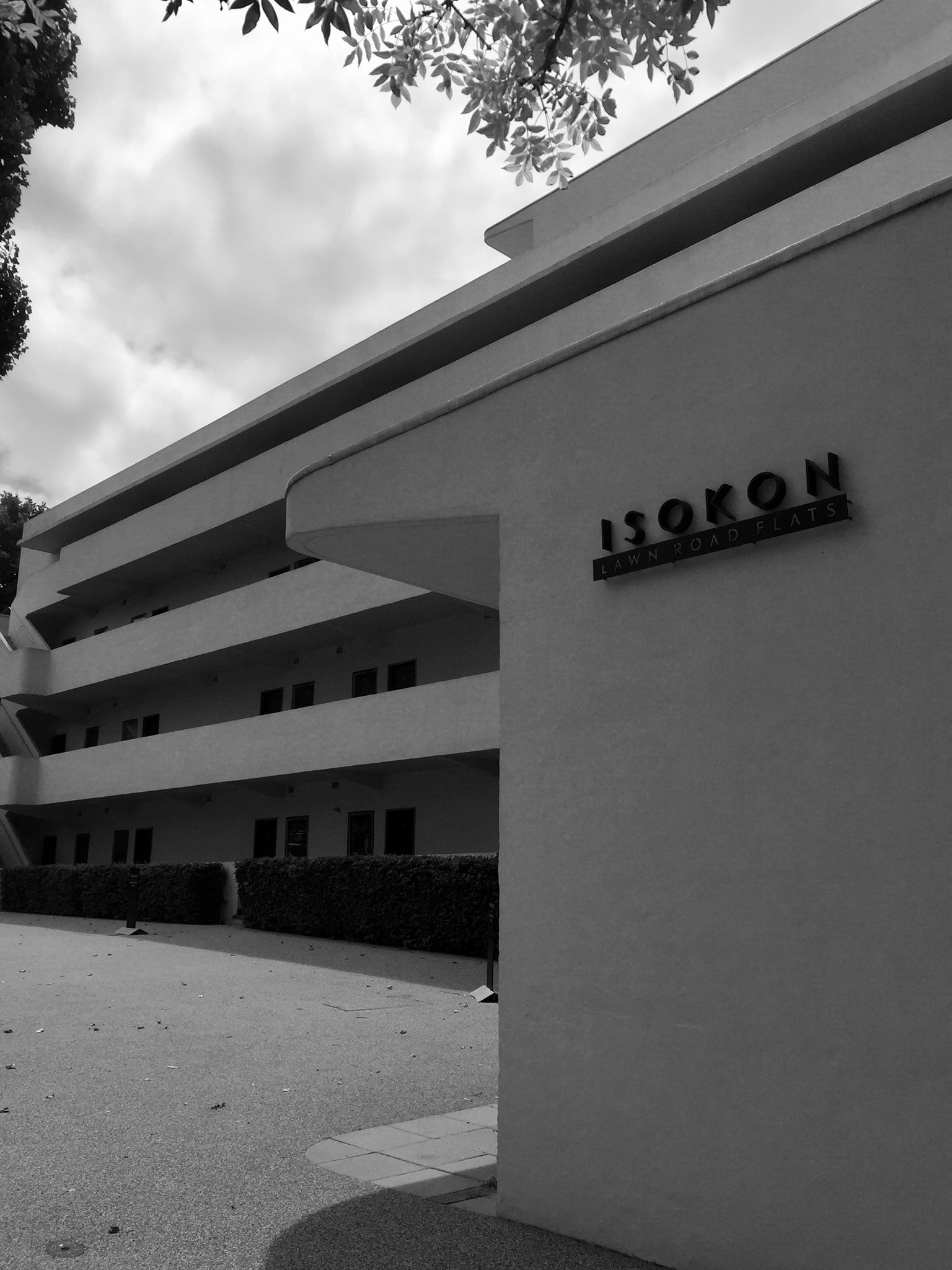 With its ocean liner profile, the stark Isokon Building (also known as the Lawn Road Flats) is home to the Isokon Flats.

It was designed by the Canadian Engineer Wells Coats on behalf of Molly and Jack Pritchard as an experiment in communal urban living and was one of the first blocks of Modernist flats in Britain.

It is constructed primarily from reinforced concrete. This was seen as a drastic departure from the brick and stone residential architecture in the surrounding Hampstead neighbourhood.

The building was designed between 1929 and 1932. It originally housed 32 flats, which were made available to tenants in 1934. In 1937, the communal kitchen was converted into the Isobar restaurant.

[edit] Concepts behind the design

Each minimalist studio included a living room, bathroom, micro kitchen and dressing room; eight also included a bedroom. The flats were built from standard parts in an approach that was common in industrial design.

Shared space was set aside for staff, a garage and a larger kitchen for communal meal preparation. A dumbwaiter system was used to deliver food from the larger kitchen to the individual flats. Shared balconies were designed to encourage social interaction and spark intellectual exchanges in the classless hierarchy that existed amongst the tenants.

Instructions for the floorplans came from Jack Pritchard, who wanted an egalitarian approach based on Le Corbusier’s idea that homes should be 'machines for living'. The Pritchards hoped the flats would allow them to separate themselves from the bourgeois middle class and provide a place for other like-minded people to live and socialise under the same conditions.

As marketing manager for the Estonian company Venesta, Pritchard was connected with innovative designers through his work with one of the largest plywood furniture manufacturers in the world. So when the flats became available, they attracted many international designers and architects who already knew (and in some cases, worked with) Pritchard.

The Isobar restaurant, based on a concept by Marcel Breuer and F.R.S. ("Kay") Yorke, became the backdrop to meals and gatherings of the buildings' residents. Its first manager, Philip Harben, became one of the first television celebrity chefs in Britain.

Over years, the list of resident architects, politicians, designers, writers and others included Breuer himself along with Walter Gropius, Laszlo Maholy-Nagy and Agatha Christie (who moved to an Isokon Flat with her husband during the Second World War when her home was requisitioned by the Government for the war effort). The British architect Sir James Frazer Stirling was a resident during the early 1960s. 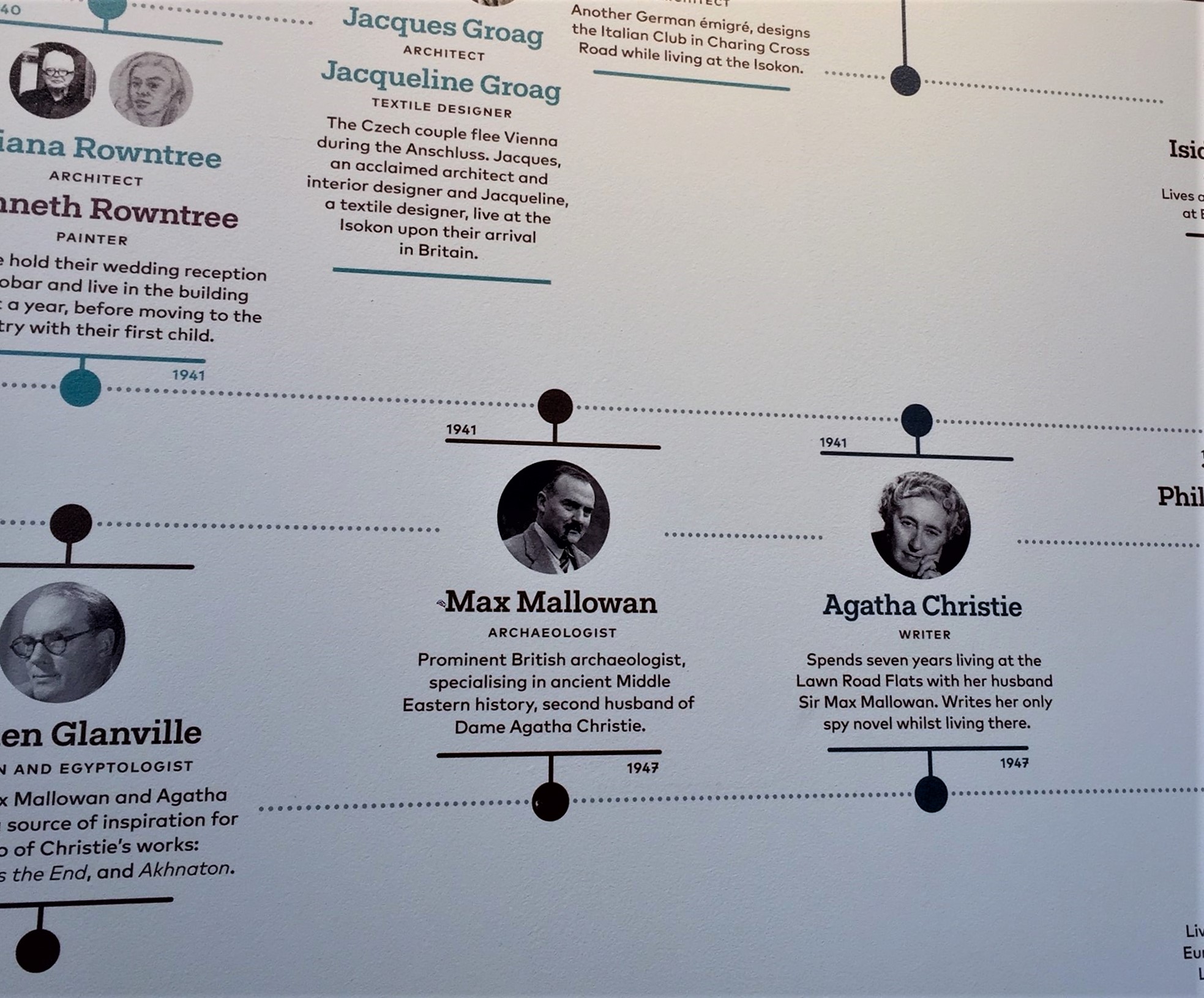 One notorious resident was Dr Arnold Deutsch, an agent known for recruiting Soviet spies. Estimates indicate that as many as 30 Soviet agents lived in the Isokon Flats between the 1930s and the 1960s.

The Pritchards lived in their penthouse flat from 1934 until the mid 1970s. It was rumoured that Pritchard would only allow interesting people to live in the flats, but it seems as though those who shared his views were the main people attracted to the idea of living in Isokon Flats.

Always looking for ways to use plywood, Pritchard made sure each flat included built-in plywood furniture that would be comfortable and functional.

Coates and Pritchard had shared interests in architecture, politics and other matters. They worked together to form the Isokon Furniture Company and looked to collaborate on additional housing projects, although this did not in the end happen for both financial and personal reasons.

Despite introducing iconic furniture like Breuer’s Long Chair and Egon Riss’s Penguin Donkey bookcase (both included in the photograph above), the Isokon Furniture Company folded during the Second World War. It was restarted in 1963 as Isokon Plus.

There are several theories about the origins of the name Isokon. One suggests it is a variation on the term 'isometric construction drawing' which was a three dimensional type of architectural drawing. Another theory proposes that it was based on Coates’ use of isometric perspective and constructivist aesthetics. Yet another theory, this one from Isokon Plus, claims it is a contraction of the words ‘Isometric Unit Construction'.

The bar closed in 1969 and was converted into flats when the building was sold to the New Statesmen magazine. In 1972 the building was sold again, this time to Camden Borough Council, which abandoned it and left it in disrepair. Eventually the Council agreed to sell the property to the Notting Hill Housing Trust under one condition: the Trust would agree to invest in a major refurbishment.

The renovated building houses 20 studio flats (available to key workers through a shared ownership scheme) along with eight larger one-bedroom flats and a penthouse (which are sold outright). In 2014, a gallery, including a restored dressing room and a kitchen, was created in what was originally the building’s garage.

Retrieved from "https://www.designingbuildings.co.uk/wiki/Isokon_Flats"
Create an article