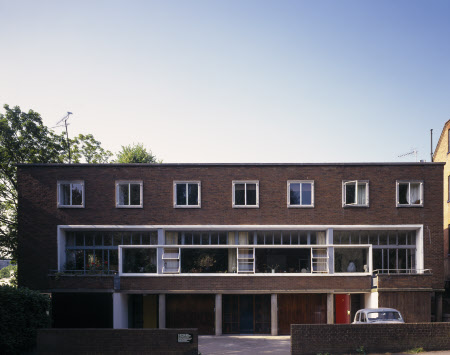 2 Willow Road is a terraced house designed by the architect Erno Goldfinger, located in Hampstead, London. It is considered one of the finest examples of modernist housing in the UK.

Goldfinger wanted to build a family home for his own personal use, as well as to test and showcase aspects of modernist design. In 1936, he submitted plans for a block of flats to London County Council, but they were initially rejected. Reducing the scale of his plans, Goldfinger’s final design was submitted in 1937.

However, the plans were strongly opposed by a local residents group, which included the James Bond novelist Ian Fleming and the future Conservative Home Secretary Henry Brooke. Their grievances made the national press.

Goldfinger successfully argued that the housing would conform with the surroundings and the tradition of Georgian building in Hampstead, and would not feature very much exposed concrete. The plans were approved, and the houses were completed in 1939. No.3 was sold off-plan, while No.1 was rented. No.2, the largest was lived in by Goldfinger (and family) until his death in 1987. 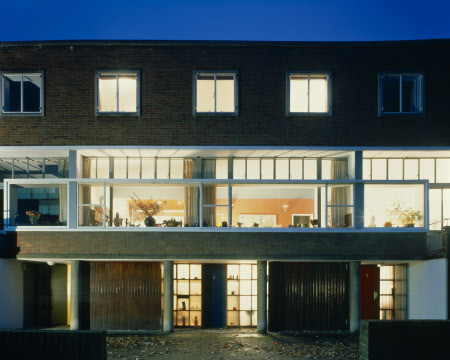 The houses were constructed from concrete and red brick facing, a concession necessitated by the controversy of the plans. In accordance with other modernist houses of the time, it comprised strong, clean lines, with exposed load-bearing concrete columns as part of a reinforced concrete frame, and a stretch of continuous windows across the first floor.

Although the exposed columns and concrete frame would become a characteristic feature of Goldfinger’s style, he did not completely reject the notions of classical architecture in which he had trained. For example, the front elevation includes the use of coping to cast rainwater off and away from the flat roof, thereby avoiding the problems of water staining that afflict other more cube-like modernist buildings. 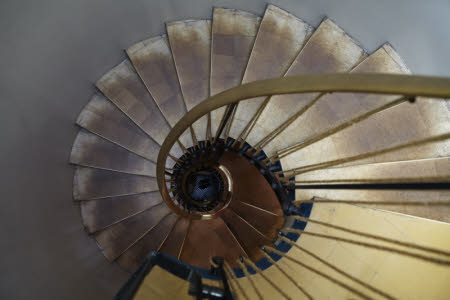 The external concrete frame provides the structural support for the building, and so the interior is open and spacious, featuring a spiral staircase designed by the engineer Ove Arup. The wedges of concrete stair treads are cantilevered from the surrounding core, avoiding the need for a central column. This allows light from a top floor sky light to flood all the way down. 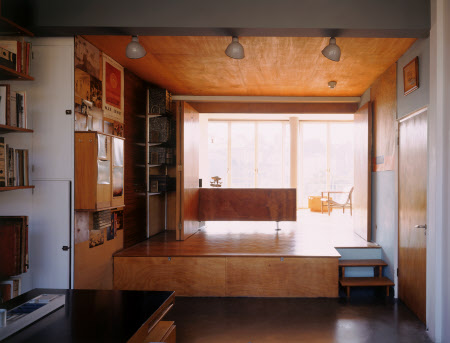 The house is notable for its innovative techniques for maximising the use of space. Movable partitions allow for flexible, open plan living. Often these partitions take the form of folding screens, with one separating his wife’s art studio from the dining room operating on a floor-to-ceiling piano hinge, thereby removing the necessity of a track.

Goldfinger had originally intended for the first floor front window to be entirely made of glass, however, after objection from planners, he designed in a concrete shelf to add more sub-division. Painted white, this served as a light shelf, reflecting natural light deep into the building. On the top floor, the two bathrooms were positioned in the centre of the building, lit using skylights.

Goldfinger did not much like central ceiling lights, so No.2 is lit entirely by wall lights, often with theatre-style glass shades with a brass cup and hinge that he designed himself.

Goldfinger designed most of the furniture for the house, including an innovative desk with horizontally-swiveling drawers, bookshelves, and even the door handles. 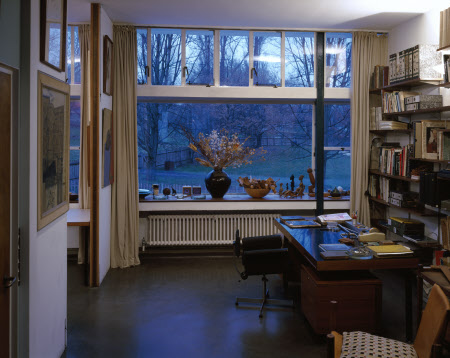 2 Willow Road was acquired by the National Trust after Goldfinger’s wife died in 1995. It is now open to the public for guided tours.

The group tours begin with a short introductory film, and are conducted by expert volunteers. As well as holding considerable architectural interest, the house contains Goldfinger’s eclectic collection of 20th century art, with the likes of Bridget Riley, Marcel Duchamp, Henry Moore and Max Ernst.

The National Trust have done a commendable job in maintaining the house, not as a conventional museum, but instead as though Goldfinger had left, with food packets and jars still on kitchen shelves, papers still arranged on the desk, and so on.

For more information and to book a tour, see National Trust.

Retrieved from "https://www.designingbuildings.co.uk/wiki/2_Willow_Road"
Create an article