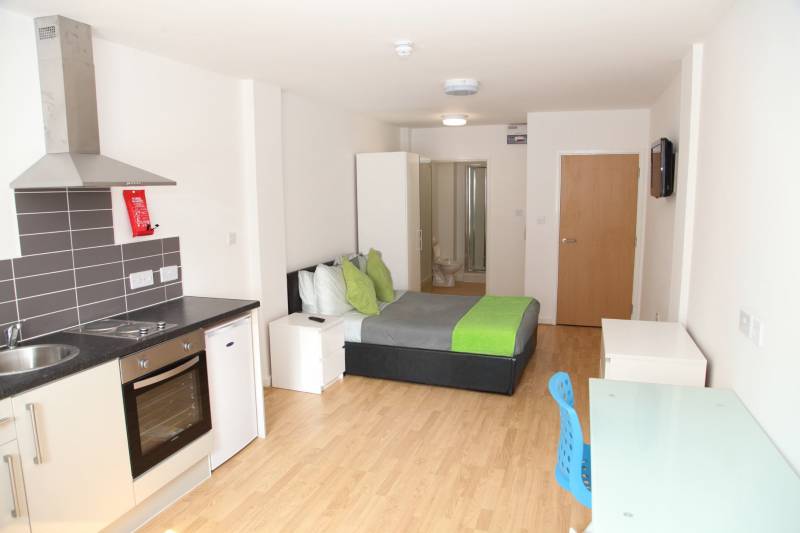 A studio flat is a self-contained habitable space in which the living room, bedroom and kitchen facilities are all incorporated into one space, sometimes with partial walls or other forms of divider used to separate the different areas.

A bedroom may be positioned in one corner, while a small kitchen (or kitchenette) may be in another corner, with the space between them allocated as the ‘living room’. The bathroom facilities are typically contained in a smaller room within the flat.

Depending on the building complex, studio flats may also include storage spaces, fold-away beds, garden areas, balconies, and so on. According to London’s planning guidance, the minimum size recommended for a studio flat, is 37 sq. m.

A one-bedroom flat (often referred to as a ‘single flat’ or ‘bedsit’), has separate spaces for the bedroom, living room, and kitchen areas instead of a single multi-purpose room. The similarity between a one-bedroom flat and a studio flat is the separate bathroom space.

In terms of the market, studio flats tend to be targeted at young professionals, graduates and new renters who wish to live in a relatively central urban location at a more affordable rate.

Even smaller micro flats, of as little as 13 sq. m are offered for student accommodation, and as an affordable-rent solution for dense areas of cities such as central London

Retrieved from "https://www.designingbuildings.co.uk/wiki/Studio_flat"
Create an article