Identifying the causes of trends in construction labour productivity

The Construction Industry Training Board (CITB) use two tools to predict labour demand in the construction industry:

The CSN works at the National and Regional level, whilst the LFT can work at a more local level. Both need to consider the impact of changes in productivity on labour demand. In addition, CITB wish to understand the role they might play in improving productivity in the construction industry.

This article describes work undertaken by Whole Life Consultants Ltd (WLC Ltd) to identify the trends in productivity, what their causes might be, and what action needs to be taken if productivity is to be improved.

There were three strands to our approach:

Figure 1 shows total construction output in constant 2005 prices and productivity expressed as output per hour worked, both normalised to 1978 values, the first year for which consistent statistics are available. In each case a straight regression line has been fitted to the data. This shows that the compound rate of growth in output has been 1% for the past 36 years, whilst the compound rate of increase in productivity has been approximately 0.5% over the same period.

Figure 2 shows changes in productivity measured in terms of Gross Value Added (GVA at constant 2011 prices) per average number employed during the year for the period 1998 to 2013, the only years for which GVA is available. 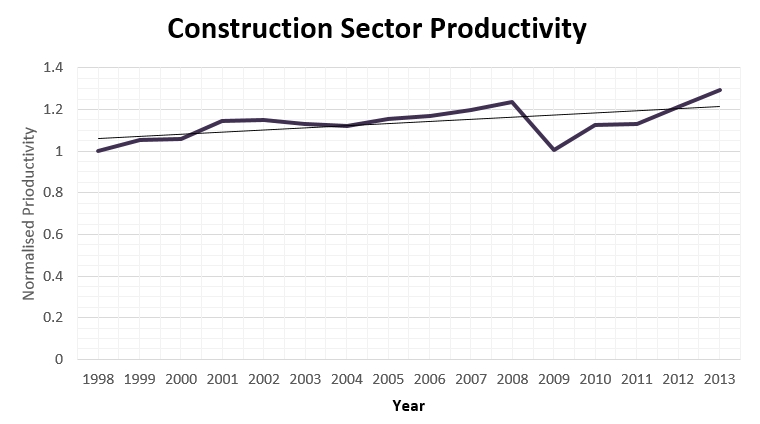 [Fig 2: Trend in productivity measured in terms of GVA per hour worked]

The compound rate of growth over this 16 year period is about 1% or roughly twice that measured in terms of total output. This suggests either that there has been a growth in capital investment (mechanisation) or technological progress (innovation) or both.

Figure 3 shows the relationship between productivity measured in terms of total output per person employed and output for the period 1978 to 2014. The confidence level in the linear regression is greater than 99%. 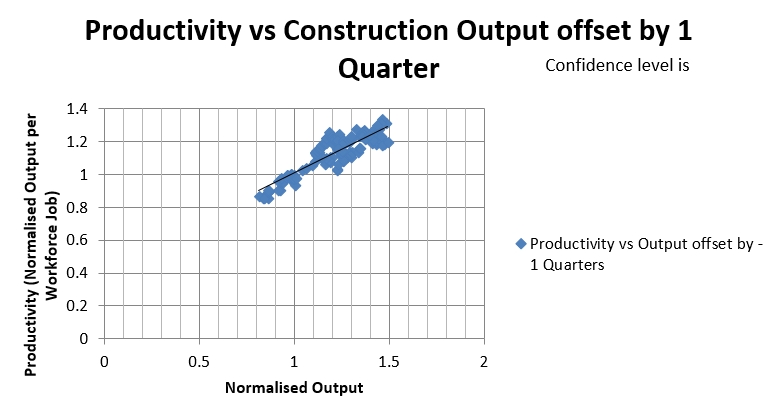 This very powerful relationship appears to overshadow other factors and suggests that the dominant factor affecting productivity is the level of activity in the construction industry.

Figures 4, 5, 6, and 7 show changes in productivity measured in terms of GVA per yearly average of number employed for Architectural and Engineering Activities, Construction of Water Projects, Electrical Trades, and Plumbing Trades respectively. 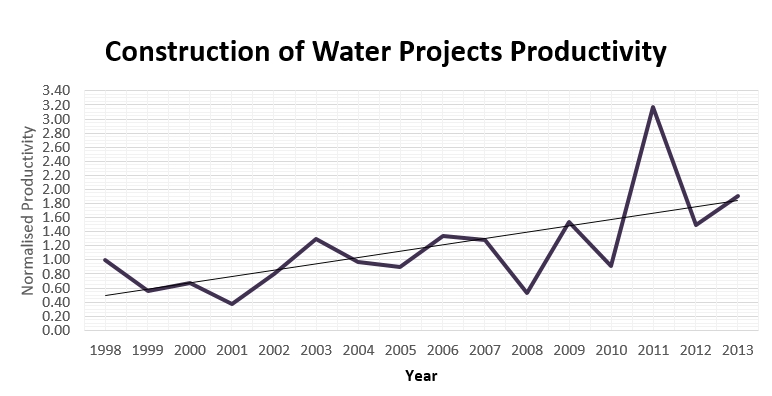 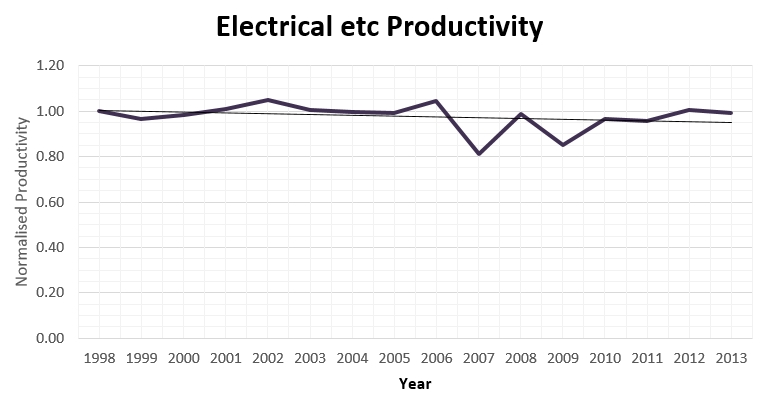 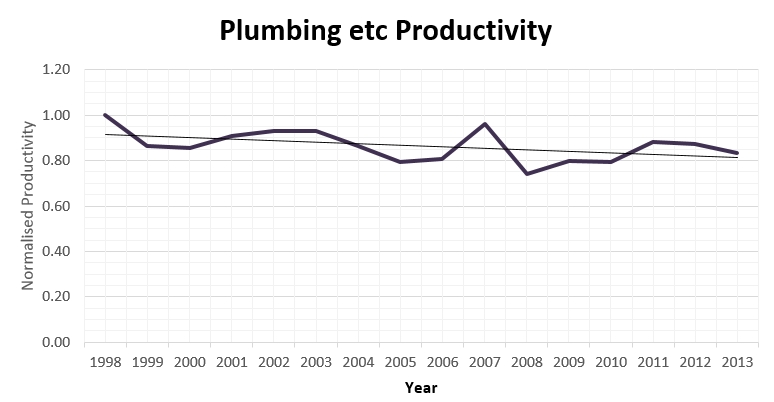 The lack of significant change in the productivity of the professions is understandable, though it will be interesting to see whether or not the increased use of BIM in future years has an impact. The very significant rise in productivity in the construction of water projects may be a result of the presence of a Regulator, whilst the downward trends in electrical and plumbing trades are more difficult to explain. However, it may be that not all plumbers and electricians are being captured in the statistics, which include only specialist firms and ignore the tradesmen employed by general contractors. It follows that trends reported for individual trades should be viewed with the utmost caution.

For convenience, we have divided the potential causes of changes in productivity into external and internal factors. External factors relate to the organisational or industrial environment whilst internal factors are those that are clearly within the control of site management.

The expert panel were unanimous in their view that the economic cycle had a major impact on the productivity of the industry and Figure 3 supports that view.

Competition might be expected to play a major role in causing changes in productivity, but we could find no evidence to support that view. This may in part be due to the current industrial environment where developers have more interest in end-to-end productivity than performance in any one phase of a development.

In recent years, there has been an increasing recognition of the impact of trusting relationships on productivity. Partnering and alliancing are modern forms of contract designed to share risk in a more equitable manner than traditional ICE and JCT forms of contract. Co-location of client, designer and contractor teams lead to joint ownership and resolution of problems, increased awareness of the impact of delays, and an increased understanding of making the design ready before construction begins. The Expert Panel was clear that client relationships played a major role in improving productivity.

There is considerable evidence to show that innovation is an important driver of productivity improvement. Innovation may embrace both products and processes, but can be constrained by regulations that restrict creative freedom. It is necessary both to incentivise productivity and to exercise a reasonable balance between the need of the supply chain for creative freedom and the need of client organisations for a reasonable degree of control.

If overtime is worked consistently for more than about three months or so, there is, in round terms, a loss of about 1% in productivity for every hour per week worked above 40.

[edit] Increase in the size of the workforce

Fig 8 shows that the average productivity of two gangs on the same site doing identical jobs under identical conditions at the same time can differ by as much as 75%. 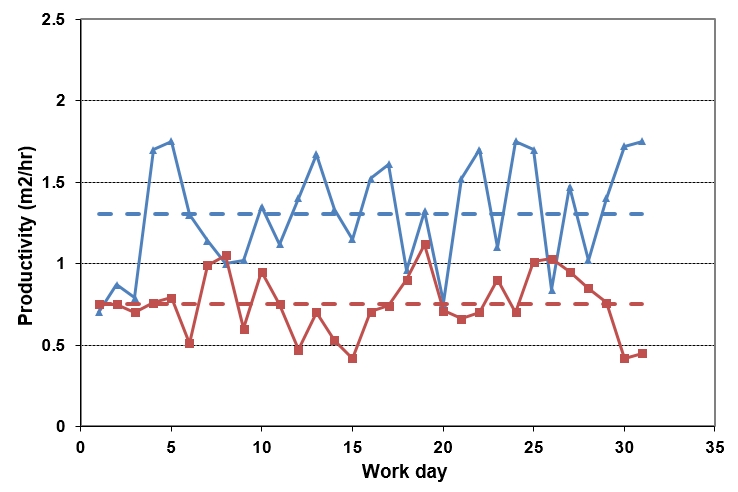 [Fig 8: Effect of quality and training of labour force]

Construction productivity in general has increased by about 1% year on year for the past 16 years, but the evidence for individual trades is mixed and unreliable. The strong correlation between productivity and overall output of the industry overshadows other factors. Nevertheless, it can be argued that all of the internal causes of changes in productivity are the result of management actions. Delays can be avoided by good planning. Working hours and the size of the workforce are decided by management.

The quality of the labour force is a function of the way in which it is selected and trained: both are the responsibility of management. The provision of training in the causes of low productivity and the actions that can be taken to improve it for both first line supervisors and senior management throughout the supply chain could therefore yield a handsome dividend for contractors and clients alike.

Retrieved from "https://www.designingbuildings.co.uk/wiki/Identifying_the_causes_of_trends_in_construction_labour_productivity"
Create an article