Productivity in construction: Creating a framework for the industry to thrive 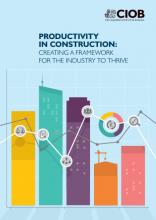 On 24 May 2016, the Chartered Institute of Building (CIOB) published a report intended to inspire debate about productivity in the UK construction industry, and how the built environment supports productivity growth in the UK as a whole.

Government figures released in April 2016, demonstrated the biggest fall in UK productivity since the financial crisis in 2008. In construction, productivity has only improved by 1.4% since 1997.

The new report, Productivity in Construction: Creating a Framework for the Industry to Thrive, uses the Government’s 15-point productivity plan as a framework, illustrating how, point-by-point, construction acts as an agent of change to improve productivity within the wider economy, how it might improve its own internal productivity, as well as highlighting the opportunities and challenges in delivering improvement.

The report seeks to identify what these factors might be, supported by survey evidence from across the industry, policy makers and industry experts showing a wide consensus on many of the policies that should boost construction productivity.

“Firstly, there’s a need to measure more effectively the productivity of the whole process of delivering the built environment, rather than just what happens on site. Otherwise we end up missing the beneficial impacts of, for instance, better design or off-site manufacture.

“Secondly, we need to look at what construction does rather than what it is and how it impacts on the wider economy. And, thirdly, it is worth noting that as nations develop they often choose to spend more on repairing, maintaining and adapting the existing built environment. This work tends to be more labour intensive than new work, so can have the effect of suppressing the overall labour productivity figures.

“Paradoxically, you could be building more productively to a higher quality, with innovation in design, product manufacture and construction management, while the statistics suggests the industry is becoming less productive.”

“As the OECD states, productivity is about working smarter, rather than working harder.”

While the report makes a number of practical recommendations from its findings - such as tying public investment to training and job creation; developing new business models and financial models with incentives directed more towards productivity; and creating construction innovation and excellence hubs - it expresses two more fundamental concerns:

CIOB conclude, 'while construction productivity must improve, it must improve in such a way that enhances the productivity of the whole nation. Any understanding of this should be at the heart of policy making.'

Retrieved from "https://www.designingbuildings.co.uk/wiki/Productivity_in_construction:_Creating_a_framework_for_the_industry_to_thrive"
Create an article