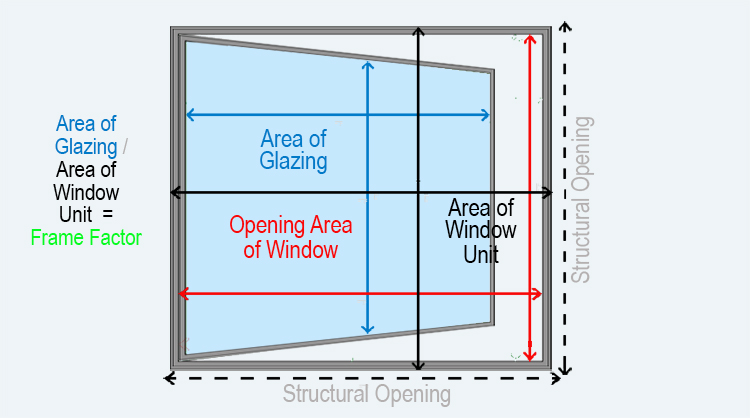 Frame factor is a term and method sometimes used when considering the design of windows in building facades. It represents the ratio between the transparent glazed area of a window and the area of the whole window unit, including the frame.

In most cases the whole window unit sizes (the frame and glass) will be known, firstly because these dimensions will be used to order windows and secondly these dimensions, plus a tolerance are likely to be the structural opening sizes for the holes in the walls where the windows will be installed on site. The actual size of the transparent part of the window is not necessarily needed in terms of procurement and installation but it is increasingly needed for other reasons.

Windows might perform a number of functions in a building; to provide daylight, to bring sunshine into a space, to protect from noise disturbance and the weather, keeping heat in the building, to provide ventilation during the day and sometimes also at night. All of these functions are measurable and in many cases the frame of a window will perform differently from the glass and so in some cases knowing the separated area of each has further uses for assessment.

A double or triple glazed sealed pane or unit refers to the glazed part, including the edge strips, any central spacers (in the case of vacuum glazing) but does not include the window frame itself. When calculating the whole window U value or thermal performance a manufacturer should calculate an average of the central pane, the whole pane (including edge seals) and the frame, which will vary depending on design and materials. That is called the whole window U-value. As many windows on a similar scheme will have the same design and same proportion of glass to frame, a frame factor may be used to calculate this.

It is important to note that a factor which represents the thermal performance of the interface between the edge of the whole window unit (or frame) and the building itself ( the edge of the structural opening or finished opening) should also be included when calculating thermal performance. This is normally a linear thermal unit called as Psi ( or ψ) value, often referred to as the installation or window Psi (ψw).

The heat transfer through a material ( the glass or the frame) relates to the Internal surface temperature which will also have an impact on the internal comfort of a building, especially in the case of glazing located near workstations or occupied areas.

The glazed area of a window provides daylight, the frame area of a window does not both will directly relate to the daylight factor, luminance and lux levels in a room during the day. Therefore in calculating the area that provides daylight to a space one cannot use the whole window unit area but only the glazed area, the frame factor is useful in giving the glazed area only. The Visible Light Transmission (VLT or Tvis) refers to the percentage or fraction of visible light that passes through a glazing system, as opposed to being reflected or absorbed. The VLT is often given for the glazed area only, rather than for the whole window unit but this should be checked with the manufacturer, it would include any films that may have been applied.

VLT/Tvw ratings for the glazed area of a window normally vary between 0 and 1, most sealed double glazed units between 0.3 and 0.7, meaning between 30% to 70% of the light is transmitted through the glass whilst the rest is reflected. If this calculation is carried out on a whole window unit, the frame would be 0% transmittance and the frame factor would help in calculating this, therefore much lower figure for the glass and the frame together.

The g value of glass, also referred to as Total Solar Energy Transmittance (TSET), Solar Heat Gain Coefficient (SHGC) as well as Solar Factor, indicates how glass transmits heat from the sun, as a percentage, or as a decimal figure.

Where 100% of the heat is transmitted (theoretical only as this would mean no glass) the value would be of 1.0 (100%,) where zero% of the heat can get through into the building the figure would be 0.0 (0%), this would indicate an opaque material (such as the frame of a window !). The g value would normally be given for a sealed glazed unit, if it were given for a whole window unit then both the opaque frame and the transparent glass (with any films) would need to be considered. The frame factor would help in calculating this.

The building regulations approved document O relating to overheating, now requires areas of glazing to be given in order for an overheating assessment to be made. It is recommended that intial assessments of overheating are made prior to planning in order to avoid changes being needed at later stages of the development process. For example if at detail stage it is found that overheating risk is high, then it may be required to adjust the sizes of the windows and go back to seek approval for this via changes to the planning application.

Note that shading will impact the g value for a given installation, especially external shading, as this blocks intense summer sun from hitting the glass. Internal blinds will not impact the over all heat gain performance because any heat gain has already entered the building, they can however assist in thermal performance and reduction of glare. Shading devices that sit between the panes of glass can impact g values but not effectively as external blinds because some of the heat will have entered the external pane of glass. Internal blinds are not considered relevant under Part O of the building regulations and external shading may be required depending on initial assessments and location.

Finally openable windows cal also serve the function of ventilating internal spaces, during the day and night, depending on their design. Single sided or cross ventilating windows also needs to be considered under the building regulations and guidance on overheating. It is good to note that the frame factor of an openable window is normally higher than for a fixed window, because the openable section of window usually also has a frame around it connected to the opening mechanisms.

Retrieved from "https://www.designingbuildings.co.uk/wiki/Frame_factor"
Create an article