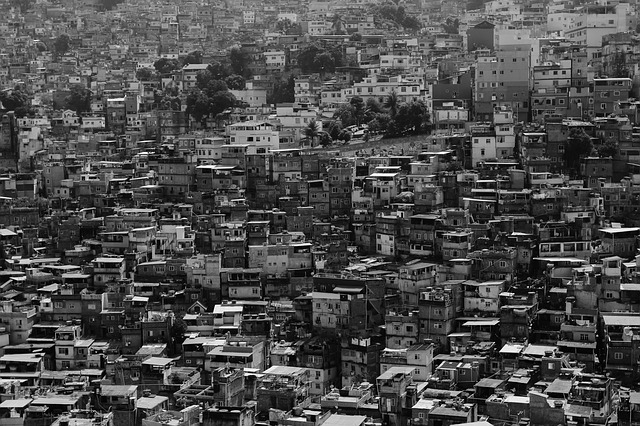 A favela is the term used for a shanty town in Brazil. In the late 18th century, the first settlements were called bairros africanos (African neighbourhoods). This was the place where former slaves with no land ownership and no options for work lived. Over the years, many freed black slaves moved in.

Even before the first ‘favela’ came into being, poor citizens were pushed away from downtown and forced to live in the far suburbs. However, most modern favelas appeared in the 1970s, due to rural exodus, when many people left rural areas of Brazil and moved to cities. Without finding a place to live, many people ended up in a favela.

Census data released in December 2011 by the IBGE (Brazilian Institute of Geography and Statistics) shows that in 2010, about (6%) of the population lived in slums in Brazil. It means that 11.4 million of the 190 million people lived in the country areas of irregular occupation and lack of public services or urbanisation - called by the IBGE of "subnormal agglomerations.

The concept of subnormal agglomerate was used for the first time in the 1991 Population Census. It contains a certain level of generalisation in order to encompass the diversity of irregular settlements that exist in Brazil, known as favelas, invaded properties, caves, slums in glens, poor communities, shanty towns, slums in backwaters, mocambos (type of shack), stilt houses among others.

The original favela was erected on the Morro de Castelo in Rio de Janeiro by the families of soldiers returning from the Canudos Campaign.

The term favela was coined in the late 1800s. At the time, 20,000 veteran soldiers were brought from the conflict against the settlers of Canudos, in the Eastern province of Bahia, to Rio de Janeiro and left with no place to live. When they served the army in Bahia, those soldiers had been familiar with Canudos's Favela Hill - a name referring to favela, a skin-irritating tree in the spurge family indigenous to Bahia, Jatropha phyllacantha (or else the related faveleira tree, Cnidoscolus quercifolius). When they settled in the Providência [Providence] hill in Rio de Janeiro, they nicknamed the place Favela hill from their common reference, thereby calling a slum a favela for the first time.

The favelas were formed prior to the dense occupation of cities and the domination of real estate interests. The first recorded favela was in the early 1920's. The housing crisis of the 1940s forced the urban poor to erect hundreds of shantytowns in the suburbs, when favelas replaced tenements as the main type of residence for destitute cariocas (residents of Rio). The explosive era of favela growth dates from the 1940s, when Getúlio Vargas's industrialization drive pulled hundreds of thousands of migrants into the Federal District, until 1970, when shantytowns expanded beyond urban Rio and into the metropolitan periphery.

Most of the current favelas began in the 1970s, as a construction boom in the more affluent districts of Rio de Janeiro initiated a rural exodus of workers from poorer states in Brazil. Since favelas have been created under different terms but with similar end results, the term favela has become generally interchangeable with any impoverished area.

Favelas are built around the edge of the main city, so in a way, they are actually expanding the city. Communities form in favelas over time and often develop an array of social and religious organisations and forming associations to obtain such services as running water and electricity. Sometimes the residents (favelados) manage to gain title to the land and then are able to improve their homes. Because of crowding, unsanitary conditions, poor nutrition, and pollution, disease is rampant in the poorer favelas, and infant mortality rates are high. 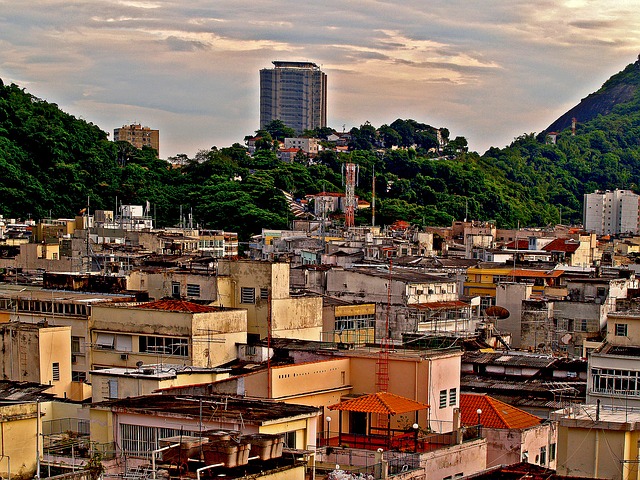 The explosive growth of favelas triggered government removal campaigns. Police have little or no control in many favelas. A programme in the 1940s called Parque Proletário destroyed the original homes of those dwelling in favelas in Rio and relocated them to temporary housing as they waited for the building of public housing.

Eventually little public housing was built and the land that was cleared for it just became reoccupied with new settlements of favela dwellers. In 1955, Dom Hélder Câmara, Archbishop of Recife and Auxiliary Bishop of Rio de Janeiro, launched the Cruzada São Sebastião (St. Sebastian's Crusade), a federally financed project to build an apartment complex in the biggest favela at the time, Praia do Pinto. The goal of the Cruzada was to transform favela dwellers into more acceptable citizens by only housing those willing to give up the vices associated with favela life. One was in Praia do Pinto and the other in the favela of Rádio Nacional in Parada de Lucas.

Removal programmes of the favelas flourished once again in the 1970s under the military dictatorship, disguised as a government housing program for the poor. What really happened was that more favelas were eliminated and their residents were displaced to urban territory lacking basic infrastructure. The idea was to eliminate the physical existence of favelas by taking advantage of the cheaper prices of suburban land. The favela eradication programme became paralysed eventually because of the resistance of those who were supposed to benefit from the programme and a distribution of income did not permit the poor to assume the economic burden of public housing that was placed on them.

The people who live in favelas are known as Moradores da favela, or pejoratively as favelados. Favelas are associated with extreme poverty. Brazil's favelas can be seen as the result of the unequal distribution of wealth in the country. Brazil is one of the most economically unequal countries in the world with the top 10% of its population earning 50% of the national income and about 8.5% of all people living below the poverty line.

The Brazilian government has made several attempts in the 20th century to improve the nation's problem of urban poverty. One way was by the eradication of the favelas and favela dwellers that occurred during the 1970s while Brazil was under military governance. These favela eradication programmes forcibly removed over 100,000 residents and placed them in public housing projects or back to the rural areas that many emigrated from. Another attempt to deal with urban poverty came by way of gentrification.

The government sought to upgrade the favelas and integrate them into the inner city with the newly urbanised upper-middle class. As these ‘upgraded favelas’ became more stable, they began to attract members of the lower-middle class pushing the former favela dwellers onto the streets or outside of the urban centre and into the suburbs further away from opportunity and economic advancement. For example: in Rio de Janeiro, the vast majority of the homeless population is black, and part of that can be attributed to favela gentrification and displacement of those in extreme poverty.

[edit] Growth and removal of the favelas

Despite the attempts to cleanse Brazil's major cities like Rio de Janeiro and São Paulo of favelas, the poor population grew at a rapid pace as well as the modern favelas that house them in the end of last century. This is a phenomenon called ‘favelização’ (‘favela growth’ or ‘favelisation’). In 1969, there were approximately 300 favelas in Rio de Janeiro; today there are twice as many.

In 1950, only 7% of Rio de Janeiro's population lived in favelas, nowadays this number has grown to 19% or about one in five people living in a favela. According to national census data, from 1980–1990, the overall growth rate of Rio de Janeiro dropped by 8%, but the favela population increased by 41%. After 1990, the city's growth rate leveled at 7%, but the favela population increased by 24%. However, a report of the United Nations, released in 2010 shows that Brazil has reduced its slum population by 16%, now corresponding to about 6% of the overall population of the nation.

Current decreases in the population of favelas can, in some ways, be credited to the original reasons of rural to urban migration that, in the last years, has become less attractive once the investments in the rural whole in Brazil has improved the life conditions to rural workers.

Other investments, such as the ones to industries, infrastructure, tourism and social assistance are helping to spread the wealth, developing historic underdeveloped regions (like Northeastern Brazil) and reducing the reasons to migrate to economic cores like São Paulo and Rio de Janeiro. All of this has added to the fast economic growth Brazil has been experiencing. The poor classes are entering the middle classes and the rate of poverty is vertiginously falling.

This article was originally published on Everything Explained.

Retrieved from "https://www.designingbuildings.co.uk/wiki/Favela"
Create an article