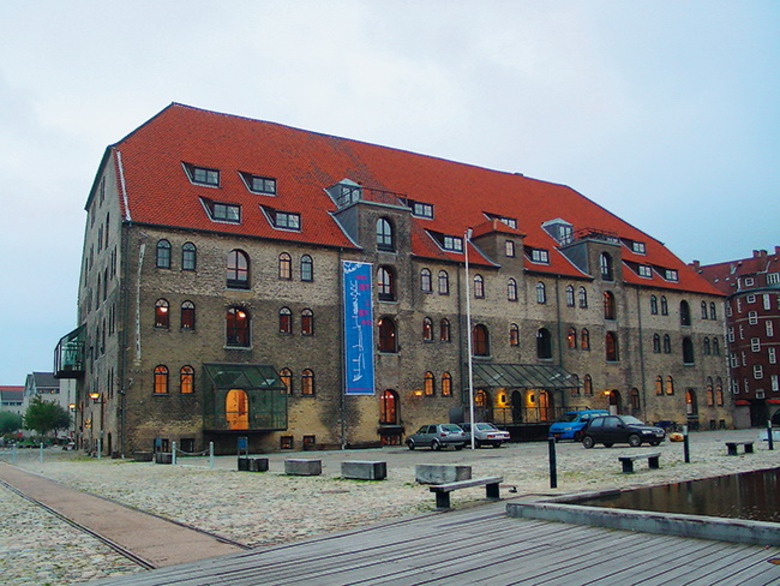 Located in an old warehouse by Copenhagen’s waterfront, the Danish Architecture Center (DAC) is an excellent place to begin an exploration of the Danish capital, giving an understanding of the way it has been designed and built over the years; as well as how people live in it, apparently happier than most other cities in the world.

The DAC building is located in the Christianshavn neighbourhood which is easily accessible from the city centre. It hosts exhibitions and events, and contains a well-stocked book shop and café with excellent city views. Guided tours around the city can be organised on request. 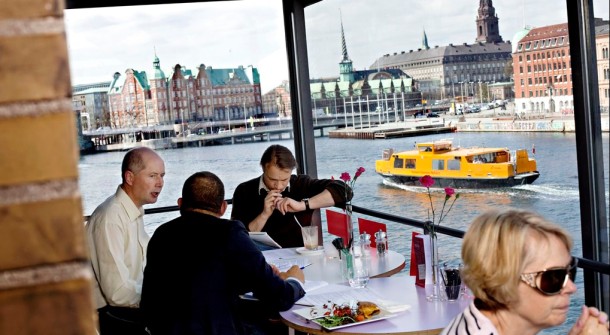 Designing Buildings Wiki had a private tour of the modern harbour and the old city, with a young architect named Julie who volunteers as a guide for the DAC.

She began by pointing down-river to an ongoing construction project, and explaining that this was a new building called BLOX designed by the Dutch architect Rem Koolhaas, which will serve as the DAC’s new home from 2018.

The tour proper began with an introduction to the harbour’s ongoing transformation from an industrial and transportation junction into a thriving commercial and residential hub. Adjacent to the much-lauded restaurant Noma, the apartment blocks of Krøyers Plads are a prime example of the area’s resurgence. Designed by COBE and Vilhelm Lauritzen Architects, the brick surfaces and faceted rooflines are inspired by the old warehouses that were once dominant.

Further along is the 29,000 sq. m landmass known as Paper Island, currently a tourist-friendly street food centre, but from 2018, to be redeveloped into halls containing event spaces, galleries and a swimming pool.

Our guide explained her day-job working in the cycling infrastructure development team, and certainly Copenhagen lives up to its reputation as being one of the premier cycling cities in the world. An elevated ‘super bike lane’ known as Cycle Snake wriggles its way over and along the harbour; seamlessly connecting the highway and the harbour bridge. 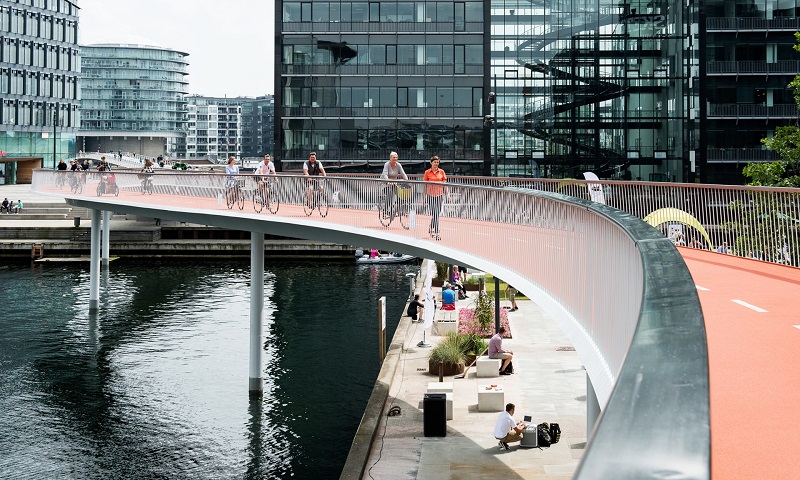 We crossed over Inderhavnsbroen, a 180 m (590 ft) pedestrian-and-cyclist bridge connecting Christianshavn with the Nyhavn district. The bridge finally opened in July 2016 after a series of delays and setbacks, including a severe calculation error that meant the two sides of bridge wouldn’t connect properly; Julie explained that the bridge already far exceeds its anticipated daily capacity of commuters and tourists. 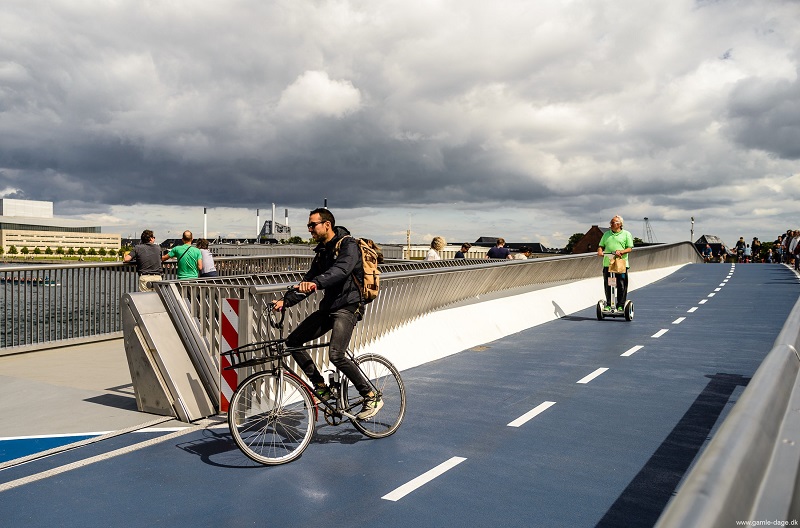 Striking examples of Copenhagen’s modernist architecture can be seen on both sides of the river.

On the Nyhavn side is Lundgaard & Tranberg’s elegant Royal Danish Playhouse, clad in a delicate balance of dark brickwork, copper and glass. Julie declared this to be her favourite building in the city, pointing out how it is partly suspended over the water, allowing Copenhagen’s many kayakers to go under the glazed floor of the café, before listing its sustainability features, such as using seawater and surplus heating from the auditoriums to reduce energy consumption. 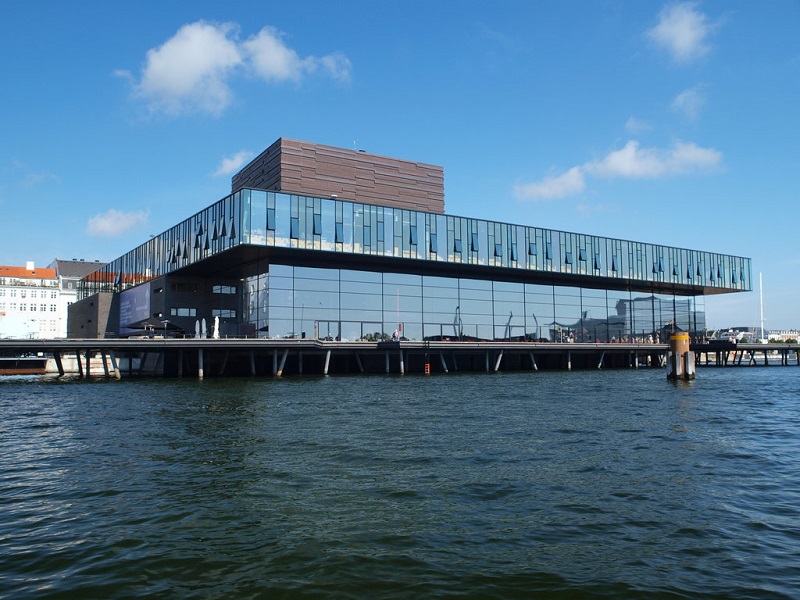 On the Christianshavn side is perhaps the city’s most controversial building, the Copenhagen Opera House. Designed in the neo-futurist style by Henning Larsen, the building dominates the waterfront with its flat cantilevered awning and glazed façade that some have likened to the grill of a classic American car. With construction delays and lavish details (the main auditorium’s ceiling is adorned with 105,000 sheets of 24-carat gold leaf), it is one of the most expensive opera houses ever built, costing well over $500 million. 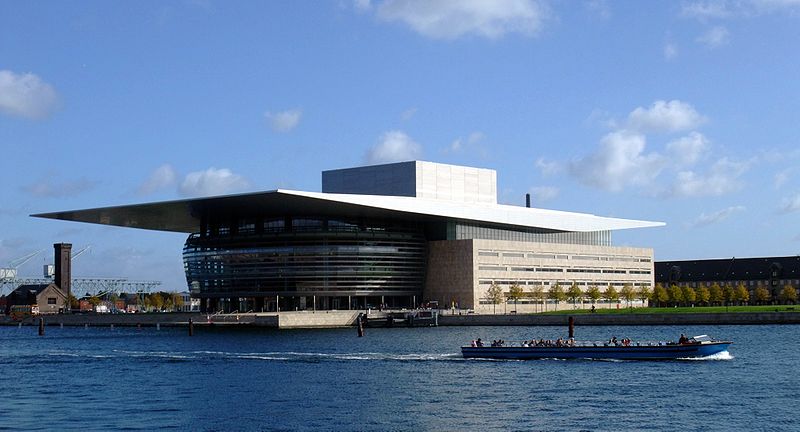 Over the other side of the bridge, is the picturesque Nyhavn, with its quintessentially Danish 17th-century terraced townhouses, built with timber, bricks and plaster, and painted in alternating bright colours.

The tour progressed north through the city, along Sankt Annae Plads, a long rectangular public square which has recently completed a major renovation to make it more pedestrian and cycle-friendly, as well as enabling it to drain rainwater and reducing the risk of flooding. 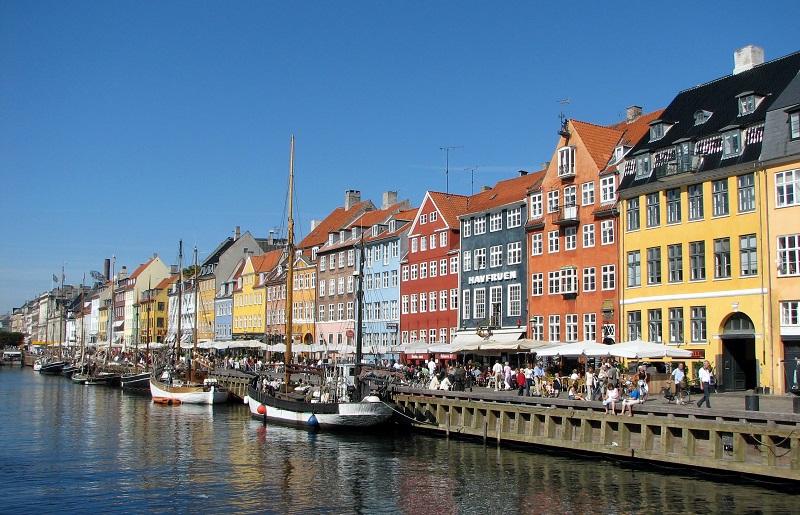 In the heart of the city, Nørreport Station is Denmark’s busiest transport hub, used by about 350,000 people each day. This is another major redevelopment completed recently, designed by Gottlieb Paludan Architects and COBE.

Previously a chaotic, noisy and unsafe area, it has been transformed into an open and accessible urban space, with forecourt structures that are mainly glass and rounded white concrete, encouraging the natural flow of people. Vehicular traffic was redirected, pedestrianising the bulk of the area, with recessed ‘bicycle beds’ providing storage for 2,100 bicycles. The lighting is incorporated into the surfaces and the towers ventilating the underground platforms, creating an effective and safe urban space. 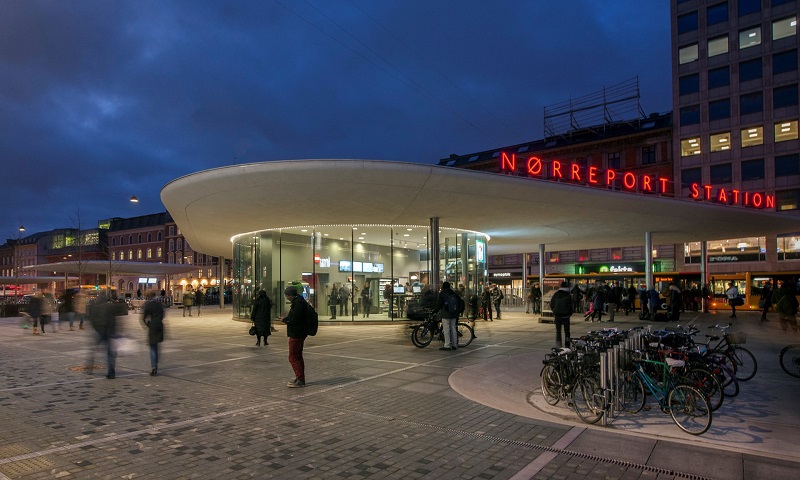 Copenhagen is a city bursting with traditional and modernist architecture, that showcases sustainable design solutions and urban planning and offers a strong model for other cities to follow.

Find out more about the DAC here.

Retrieved from "https://www.designingbuildings.co.uk/wiki/Danish_Architecture_Center"
Create an article