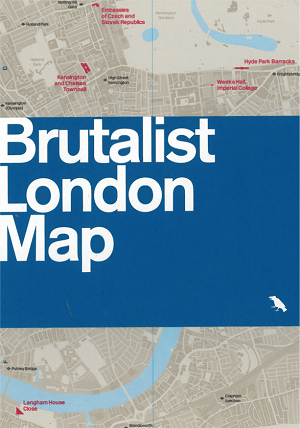 Brutalism as an architectural style has undergone something of a reappraisal over recent years. Trellick Tower, the Barbican and the Park Hill Estate in Sheffield have all been celebrated as leading examples of a post-war aesthetic that sought functionality over form, bold geometries that reflected the Le Corbusier-inspired futurism of new urban design.

Castigated and demonised over the decades by the press, such estates became synonymous with social deprivation and criminality, not to mention being used as the backdrop for any cinematic dystopia from ‘A Clockwork Orange’ to ‘Harry Brown’, brutalism has struggled to shrug off its negative connotations.

While many of the sites included on Blue Crow Media’s new London map have been given listed status, recent years have seen the demolition of iconic sites such as the Heygate Estate and Gateshead’s ‘Get Carter car park’, often in the face of strong public opposition, indicating that the verdict is still out on whether brutalism can be openly appreciated, if only from a sense of nostalgia.

The first of a new series of architectural guides by the independent publisher of maps and digital apps Blue Crow Media, ‘Brutalist London Map’ is well designed and presented, and has space to include a concise introduction from Henrietta Billings of the Twentieth Century Society.

Leaving aside the usual suspects such as the National Theatre and Balfron Tower, the map serves as a welcome reminder of striking buildings that have perhaps been forgotten, from the Welbeck Street Multi-Storey Car Park to Brixton Recreation Centre, as well as those that, were they not so prominent, might well deserve to be forgotten, such as the Hyde Park Barracks building.

The re-evaluation of, and renewed interest in, brutalism as a feature of Britain’s modern architectural history is surely welcome, and ‘Brutalist London Map’ is a must-have for anyone with even a passing interest in the variety of style and ideas in the built environment.

You can buy a copy of the map here.

Retrieved from "https://www.designingbuildings.co.uk/wiki/Brutalist_London_Map_-_review"
Create an article