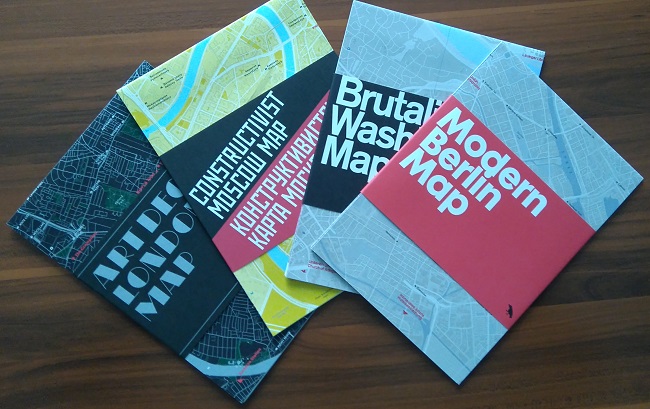 Following on from their ‘Brutalist London map’ (reviewed here), the independent publisher Blue Crow Media have expanded their portfolio, with four new architecture maps. Each double-sided map is beautifully designed and presented, and was clearly researched and compiled by enthusiasts.

Regardless of whether you take them out on a walking tour, or simply use them to decorate a coffee table, these are well worth getting hold of. 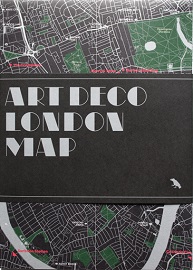 This gorgeous black-and-silver map details some of the best examples of London’s Art Deco, which flourished in the 1920s and 30s. Art Deco buildings were designed by some of the renowned artists of the time, such as Eric Gill and Serge Chermayeff.

The versatility and adaptability of the style is evidenced by the range of structures included on the map, from tube stations and cinemas, to factories, government buildings and swimming pools. 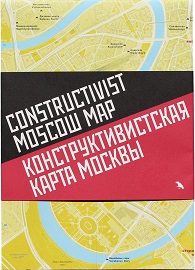 Moscow is perhaps less familiar or documented in terms of its architectural history, and this map highlights many fascinating and intriguing examples of the creative and avant garde Constructivist form.

Typical of the early Soviet era, Constructivism was a rejection of traditional ornamentation and instead embraced geometrical forms, straight lines and angles in a way that inspired the more familiar style of Brutalism.

Despite the nostalgia afforded these buildings, it is perhaps inevitable that many of them will be demolished in the near future, lending the map a slight hint of sadness. 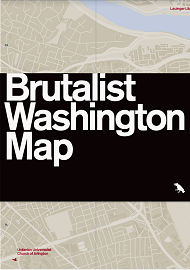 This map highlights one of the finest concentrations of Brutalist architecture in the world, in Washington D.C.

The reason for this abundance of Brutalism in the post-war era was a substantial renewal strategy for large urban areas as well as a federal government plan to construct new buildings to house its agencies which were not to be identifiable from their architecture. Brutalism, being materially economical and with its raw ambiguity and stark, sometimes imposing, form was seen as the ideal choice.

Particular highlights are the API Building and the J. Edgar Hoover Building, both of which are under threat of demolition along with many others across the city. 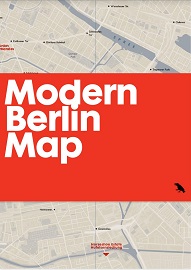 One of the most striking aspects of the German capital, however unsurprising given the wartime devastation, is the modernity of its architecture.

After Albert Speer’s plans for a Third Reich ‘Germania’ were reduced to rubble by Allied bombing, the city was split in two, resulting in some disparate architectural developments – from the pre-fabricated ‘plattenbau’ social housing to the futuristic Fernsehturm TV tower, and ‘sci-fi Brutalism’ such as the Bierpinsel (see below).

While the post-reunification modernism has its detractors, especially regarding the rebuilt Potsdamer Platz, the map picks out genuinely impressive works from the likes of Peter Eisenman and Norman Foster, which combine to give the impression of an eclectic and engaging architectural city. 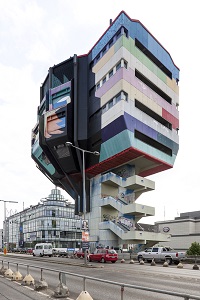 For more information and to purchase the maps, please see Blue Crow Media.

Retrieved from "https://www.designingbuildings.co.uk/wiki/Architecture_maps_-_review"
Create an article