The Grenfell Tower fire highlights the need for a holistic approach to fire safety engineering. Professor Long-yuan Li from University of Plymouth, guest editor of ICE’s Magazine of Concrete Research, says the fire behaviour of concrete is particularly complex. 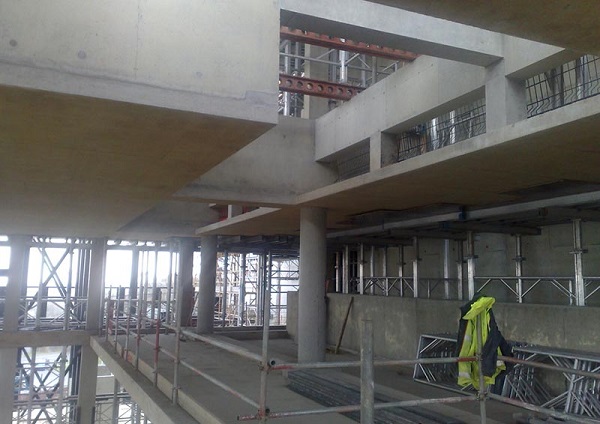 The tragic fire at Grenfell Tower in London in June 2017 highlighted the need for a more comprehensive approach to fire safety engineering. While the concrete structure behind the flammable cladding performed well, the heterogenous and variable nature of concrete means calculating its fire safety capacity can be very complicated – and certainly not taken for granted.

When concrete is subject to sufficient heat, the free water that fills the concrete pores and water chemically bound to the cement will evaporate. If the evaporation rate is greater than the vapour migration rate, pore pressure will build up. This, combined with reduction in strength caused by elevated temperatures and increase in stresses due to thermal effects, can cause concrete spalling and extensive structural damage.

In addition, developments in concrete mix design have led to new types of concrete – including high-strength, ultra-high-strength and self-compacting concrete – which, besides having an increased structural performance at ambient temperature, have also shown a different performance when exposed to fire.

The importance of understanding the behaviour of concrete materials in fire is critical. The Institution of Civil Engineers (ICE) has therefore published two themed issues of its Magazine of Concrete Research journal (69:7 and 69:8) and to help improve civil engineers' understanding of what has been achieved – and what remains to be done – to provide concrete structures that are safe in fires.

The themed issues published in April 2017 contain papers from the UK, China, Turkey, South Korea and Australia. They present results from both experimental and numerical studies on the fire behaviour of various concrete structures, ranging from the mechanical properties of concrete and steel reinforcement at elevated temperatures to the overall performance of concrete structures in fire.

It was shown from thermal gravimetric analysis, X-ray diffraction analysis and nuclear magnetic resonance test results that the fire resistance performance of reinforced concrete structures by measuring rebar temperature underestimates the failure of the calcium–silicate–hydrate (C-S-H) structure in the concrete. It was recommended that in the near future performance-based design should be used for the fire resistance prediction.

Gao et al. (2017) reported on the fire resistance of reinforced concrete beams when exposed to fire. The paper consists of four parts. The first part provides a review of design fire scenarios and existing time equivalence methods for fire resistance evaluation of structural members exposed to fire. The second part is concerned with finite-element modelling for predicting the fire performance of reinforced concrete beams and its use in parametric study.

In the third part a modified time equivalence method was proposed for predicting the fire resistance of reinforced concrete beams exposed to fire. An example was provided in the fourth part to illustrate the application of the proposed method in practical design.

Wong and Liu (2017) proposed a novel approach to the structural fire design of a concrete beam reinforced with hybrid steel–shape-memory-alloy bars to achieve a desired fire resistance level.

The method is to embed both the steel and shape-memory alloy bars in such a way that the strength of the beam is increased or maintained in a controlled manner as the temperature in the concrete beam increases, which provides an active method for structural fire protection as opposed to most traditional methods of passive protection for structural members.

By being able to maintain the bending capacity of the beam in fire at a desirable level, excessive deformation of the beam can be avoided. The concept can be extended to the design of other structural elements such as columns, floor slabs and connections.

Wu et al. (2017) reported on the fire behaviours of concrete columns with prior seismic damage. They conducted fire tests of 16 pre-damaged reinforced concrete columns (two columns for each specimen and each specimen was first subjected to cyclic loadings at room temperature to produce simulated seismic damage) and two control columns without pre-damage.

The influences of the intended drift ratio, axial load ratio, volumetric transverse reinforcement ratio and shear span ratio of the column on the fire behaviour of the tested columns were examined in detail. It was concluded that the axial load ratio of reinforced concrete columns in high seismic intensity regions should be strictly limited to lower than 0·5.

Zhang et al. (2017) discussed the mechanical properties of pre-stressing steel both in and after a fire. Empirical formulae were proposed based on experimentally obtained results for the degradation of Young's modulus, yield strength and ultimate strength of pre-stressing steel both at elevated temperatures and after cooling to ambient temperature.

It was found that the Young's modulus was largely recoverable upon cooling to ambient temperature, but the yield and ultimate strengths suffered permanent degradation. It was recommended that for pre-stressed concrete structures, reduction factors for the key mechanical properties after fire and cooling should be incorporated in the relevant design codes.

The post-fire performance of the structures was evaluated according to the structural system properties of the buildings and tests on concrete core and steel reinforcement samples obtained from the structures.

It was found that the concrete in the first building exposed to the longer fire duration suffered a substantial loss in mechanical properties, the concrete cover in reinforced concrete elements failed completely, and there was a significant loss in the yield strength of the steel reinforcement.

The second building experienced a fire of shorter duration, although the concrete cover had failed similarly to the first one, there was no substantial loss in the mechanical properties of the reinforcement and concrete.

This article was originally published here on 1 Aug 2017 by ICE. It was written by Professor Long-yuan Li.

Retrieved from "https://www.designingbuildings.co.uk/wiki/Concrete_and_fire_safety"
Create an article