Warmer houses with half the emissions for free

Tim Martel MCIAT tells AT about software he has produced to create Passivhaus standard housing.

Chartered Architectural Technologist and Passivhaus Designer Tim Martel has been working with the AECB and has been finding low energy retrofits are surprisingly cost effective when accurate calculations are done which include co-benefits.

The software used is the AECB's PHribbon, launched in 2018, which improves on inaccuracies of other software by using the Passivhaus Planning Package for energy calculations. It includes climate data, thermal bridges, solar gain, internal heat gains co-benefits about 90 costs based on building surveyor rates for items such as moving external pipework and drains for external wall insulation.

Solutions assume a 3°C increase in average house temperature after retrofit and has found that these are essentially free. Architectural technologists are well placed to plan retrofits. Martel gained additional training from the Retrofit Academy to assist with assessment, management of the process and moisture issues and he is a tutor for two modules of the AECB's Carbonlite Retrofit Course.

The UK has a very old building stock; Victorian houses are common. About 80% of the housing stock that will be around in 2050 is already built today. Home owners are often reluctant to spend money on retrofit, partly because the benefits to them are not clear, partly because of cost. An additional problem they are perhaps not aware of is that many energy calculations over-simplify the problem. These houses often have a collection of maintenance issues, often moisture-related, which have to be addressed before tackling the retrofit.

At the same time energy prices (see chart below) have been rising in recent years even when corrected to 2010 prices. 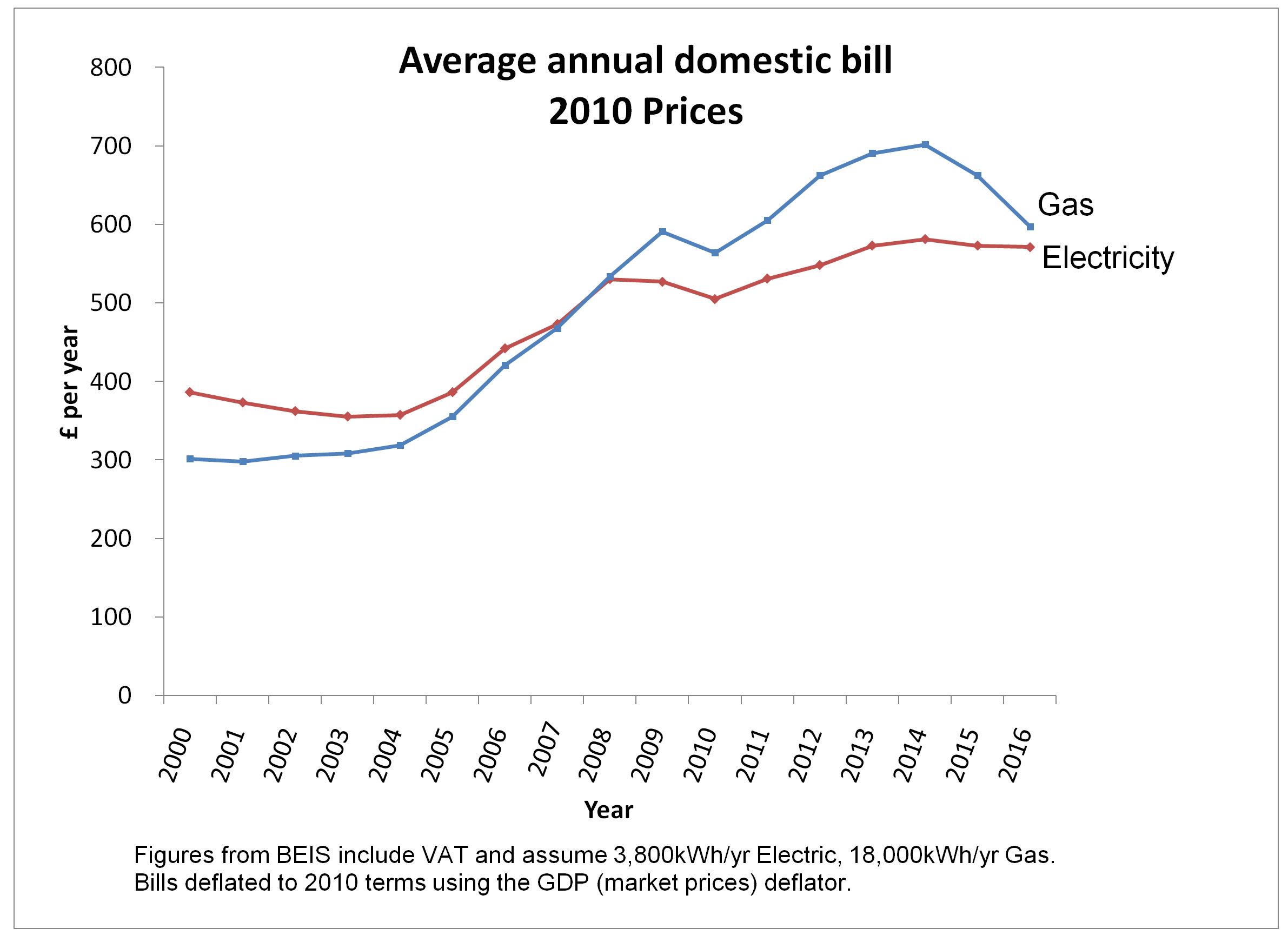 What sort of retrofit could save 50-80% of the CO2, address any moisture issues and still cost no more for the owner? That requires consideration at quite a detailed level and the Association for Environment Conscious Building (AECB) set out to find out through energy software combined with costs. It's the result of 3 years work and is being shared with AECB members through the Carbonlite Retrofit course that was launched in 2016, which includes builders, designers, manufacturers, and housing associations.

The AECB wanted to focus on improving the fabric of the building rather than adding renewables for several reasons. Fabric measures have a much longer lifespan, they need little maintenance or repair, and they target energy consumption at its source. The work took three typical house types with layouts and dimensions described by the BRE: a bungalow, semi-detached and a 3-storey town house. 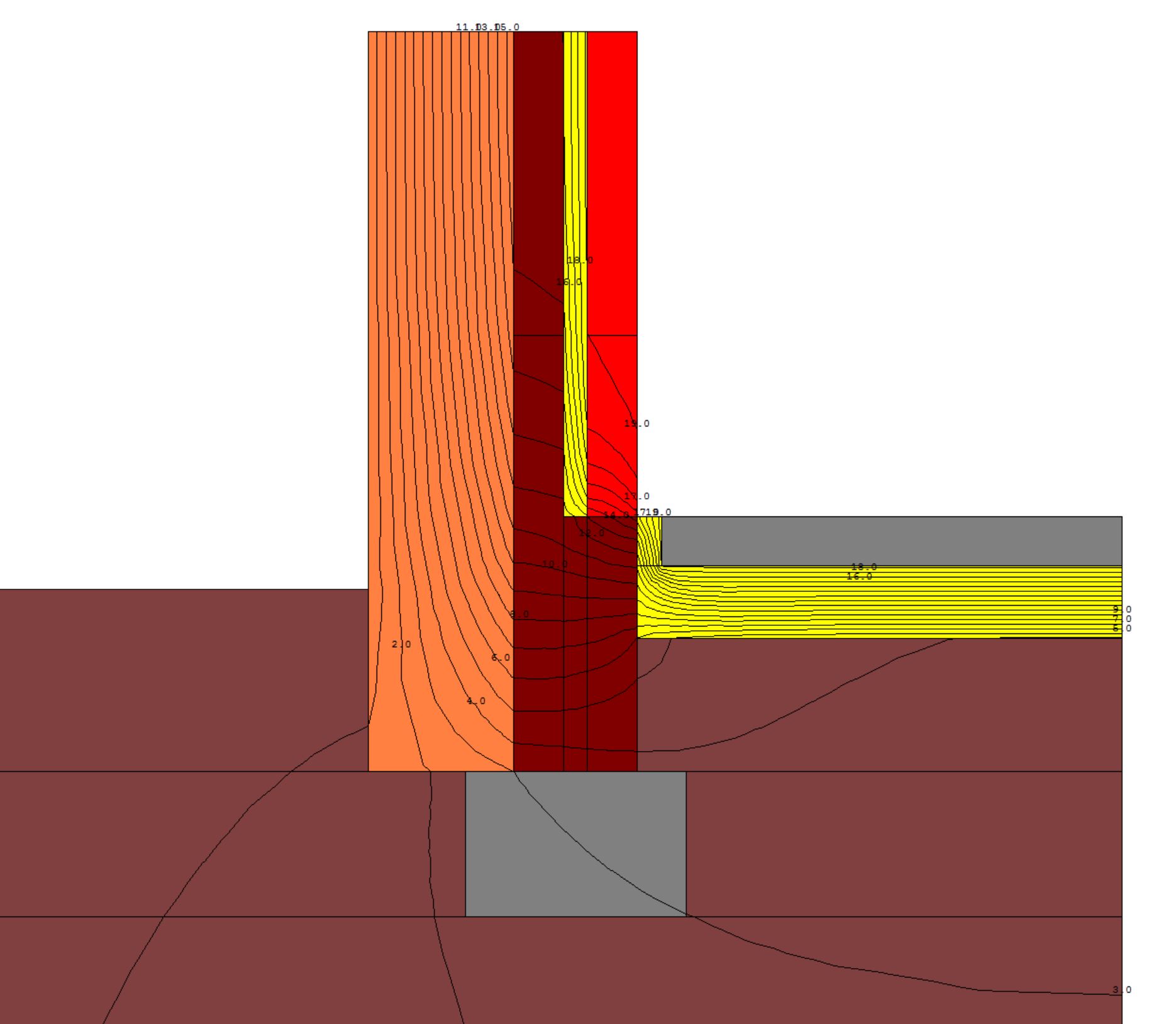 It then modelled the energy performance in a custom version of the Passivhaus Planning Package (PHPP) including the thermal bridges. PHPP is much more detailed than SAP and yields results which very closely match measured results from co-heating tests and expected yearly energy use. The study looked at the original house and nine different retrofit scenarios. Thermal bridges can make up 30% of the energy losses from a typical house, these were modelled in THERM.

Lifecycle costing was used that includes the cost of maintenance for the existing and proposed retrofit. In these calculations, houses are heated by gas and some conservative price rises are included according to the DECC central forecast (Department of Energy and Climate Change, now merged into BEIS).

Inflation is 2%, which is reasonable over the long term, even though for the past few years it has been much lower. A quantity surveyor was brought in to provide detailed costs for the retrofit measures described by each scenario and ongoing maintenance costs. Large scale retrofits would have the advantage of the economy of scale.

The option of not retrofitting the house is not free. Space heating is quite expensive and routine maintenance to the building fabric is required. That money could be better spent on an option which gives a much more comfortable house for the occupier. 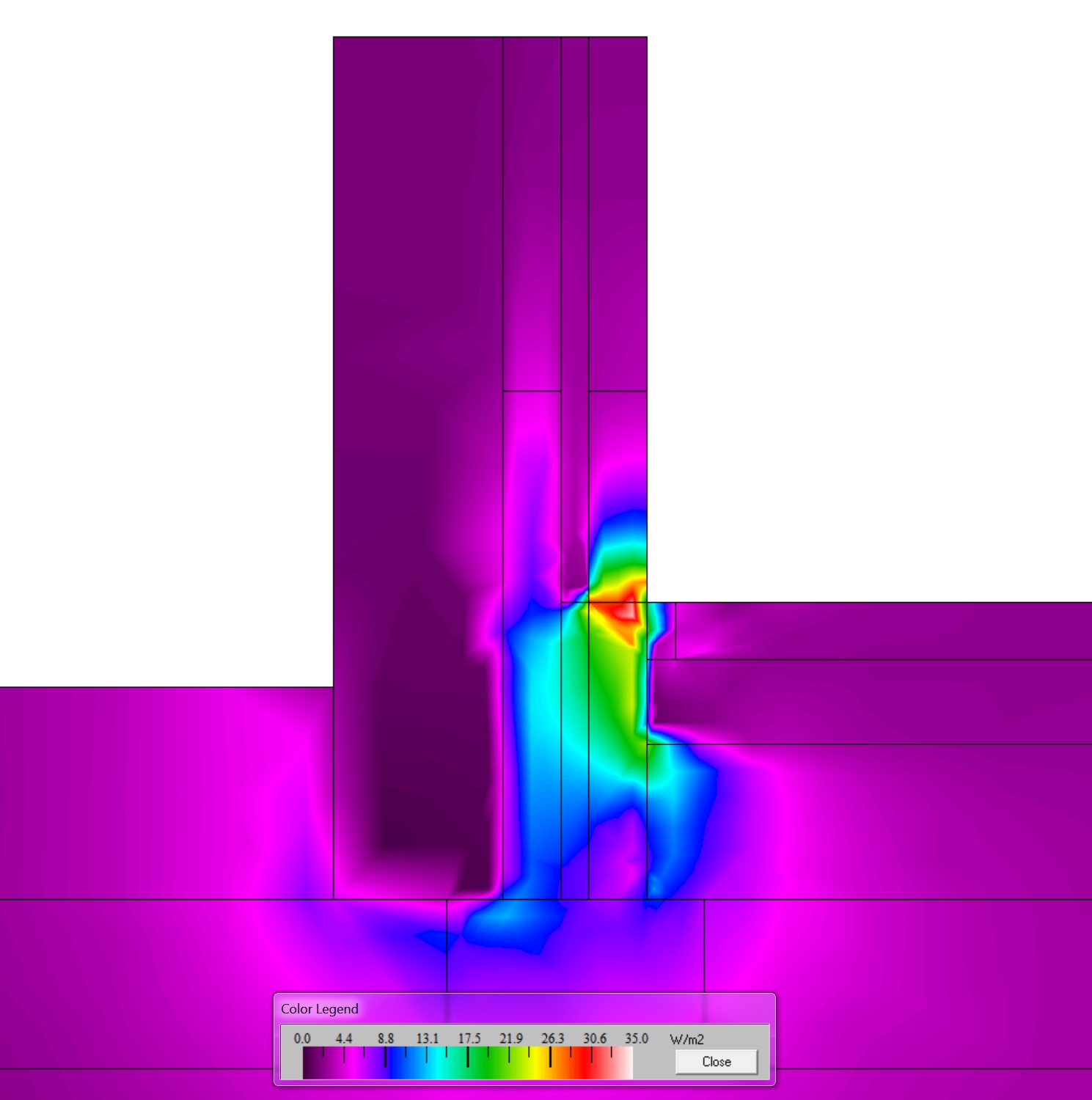 The AECB is interested in solutions that save more than 50% of the CO2, and this is a sensible minimum given that our country's target is to reduce CO2 by 80% by 2050.

REALcosting converts project costs into Net Present Value (NPV), a very common standard method. In this method, all costs and future savings are converted into todays' money. What has become clear is that money to pay for the project is not a problem; over the life of the building there is more than enough energy savings to pay for a high standard of deep retrofit, including heat recovery and triple glazing, even though fossil fuels are subsidised in this country.

In the graph, which includes two co-benefits, the most cost effective solution over 30 years is a deep retrofit saving 80% of the CO2. 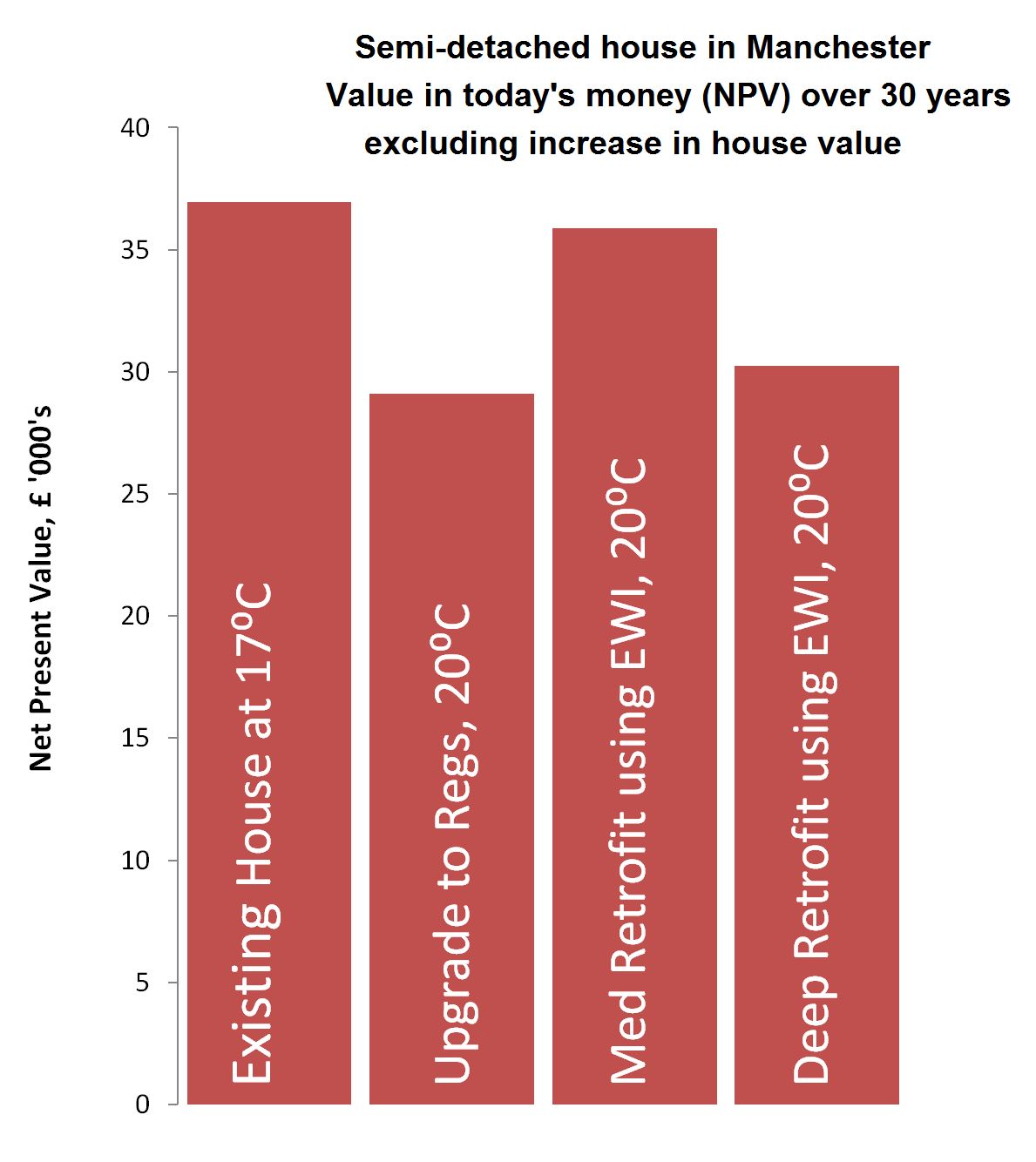 The issue is more how to spread this cost out so that the occupants who pay for it get the benefit. Even houses 100-or-more years old are likely to have at least another 60-100 years of life, because existing houses that are structurally sound are not usually replaced that often. That timescale is usually much longer than the interest of one owner, who is unlikely to be concerned beyond 30 years.

The Passivhaus institute have been working on a solution for this too, they call it ‘Incremental Retrofit' where the house is retrofitted but in stages over many years according to a plan. At the end of the planned time, the owner (not necessarily the original one), will have a Passivhaus, and this spreads the cost over a long timescale while starting to add benefits immediately.

Owners would start to have a building easier and less costly to heat, they may be able to increase the average temperature the house, for example. DECC figures gave the typical temperature of UK housing to be around 17°C. This is still quite low and most people would prefer it a bit higher, if it could be 200 then there would be a great improvement in comfort, possibly also in health for them, particularly for those at home a lot of the time.

External wall insulation is needed for CO2 savings of >50%, even when the cavity is already filled, this could be done at the same time as the windows. The AECB Carbonlite Retrofit Course goes into detail about energy and moisture issues, selecting services and typical costs. This will help businesses and retrofitters with their own projects.

It may be that the social housing sector leads on this first, as it has done with many Passivhaus projects so far. Something as important as tackling climate change should not be left to market forces, especially when market prices do not include the cost of damage, some involvement by the Government will be necessary.

"Everything we are is far too slow... The next 10 years will be absolutely crucial if we are to get on track. There is grave danger of lock-in of emissions."

Reducing the CO2 emissions of the existing housing stock must be part of any plan that addresses climate change. A third of our greenhouse gas emissions are from heating. Further information is available on the REALcosting software at www.realcosting.co.uk.

A thought provoking article with practical tools to address improving energy consumption in the existing housing stock. However, the proposed solution - EWI presents society with another issue, namely the loss of identity that vernacular architecture provides in terms of cultural heritage. What alternatives do others' think worthy of exploration?