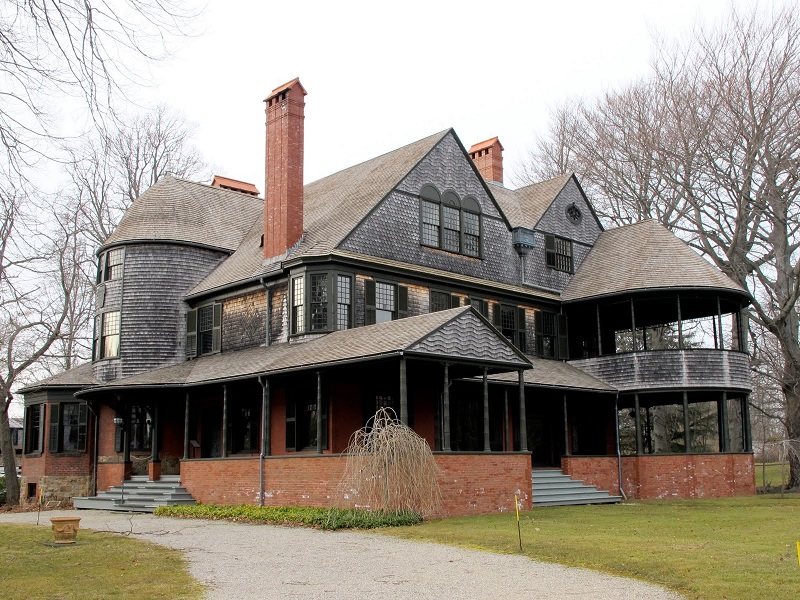 The Shingle style was employed between 1880 and 1900 by prominent American architects like H.H. Richardson, Frank Lloyd Wright and the firm of McKim, Meade, and White. The Shingle style is sometimes referred to as an outgrowth of the Queen Anne style as influenced by the early shingled buildings of New England colonies.

The style began in the New England region and some of the earliest and most notable examples are located there. The Shingle style spread throughout the country, but never became as popular or prevalent as the Queen Anne style. It remained a high fashion, architect-designed style that was seldom translated into more vernacular housing use.

The Shingle style house is marked by the presence of shingles on not just the roof, but on the wall surfaces themselves. The first floor walls may be shingled, or of stone or brick. Shingles may also cover gable ends, curving towers and porch columns.

Shingle style buildings have a rather monochrome appearance since the shingles are unpainted and uniformly cover most exterior surfaces. In shape and form, the Shingle style resembles the Queen Anne style, but it lacks the abundant decorative details. Porches are expansive, often wrapping around the front and sides of the building. Roofs are generally sweeping and multi-gabled. Windows are small and multi-paned and are often grouped in pairs or triples.

The most identifiable features of shingle style architecture include:

NB The 2018 International Residential Code (IRC), published by the International Code Council (ICC) defines shingle fashion as: ‘A method of installing roof or wall coverings, water-resistive barriers, flashing or other building components such that upper layers of material are placed overlapping lower layers of material to provide drainage and protect against water intrusion at unsealed penetrations and joints or in combination with sealed joints.’

Retrieved from "https://www.designingbuildings.co.uk/wiki/Shingle_style_architecture"
Create an article