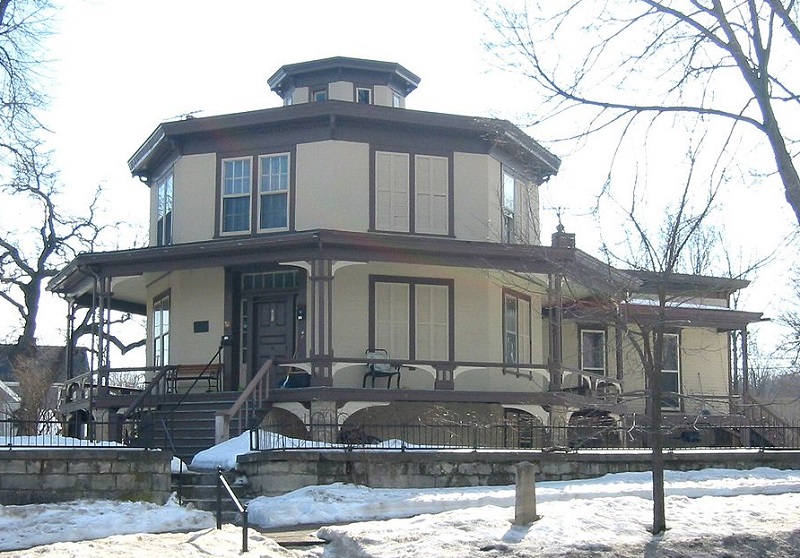 The Octagon style is a distinctive and remarkable yet relatively rare architectural style, which enjoyed a brief period of popularity primarily in the years from 1850 until 1870.

Previously, Adam- or Federal-style buildings had occasionally featured octagonal wings or projections, so the octagon form was not a new creation. Several prominent designers (including Thomas Jefferson) built octagon buildings in the United States in the late 18th and early 19th century, but the octagon house form seldom appeared until it was reintroduced to the public through the writings of Orson Squire Fowler in 1848.

Fowler was a public lecturer, writer, and eccentric, and he promoted this style in his book The Octagon House: A House for All.

He viewed the octagon form as a healthful, economical, and modern innovation in housing and argued that it offered increased sunlight and ventilation, as well as savings on heating and building costs.

Octagon houses were built across the US but were more of an anomaly than a common style. The Northeast and Midwest had the greatest number of octagon buildings. Octagon houses often incorporated elements of other styles, the Greek and Gothic Revival styles, and especially the Italianate.

Typical identifiable features of the octagon style include the following:

Retrieved from "https://www.designingbuildings.co.uk/wiki/Octagon_style"
Create an article