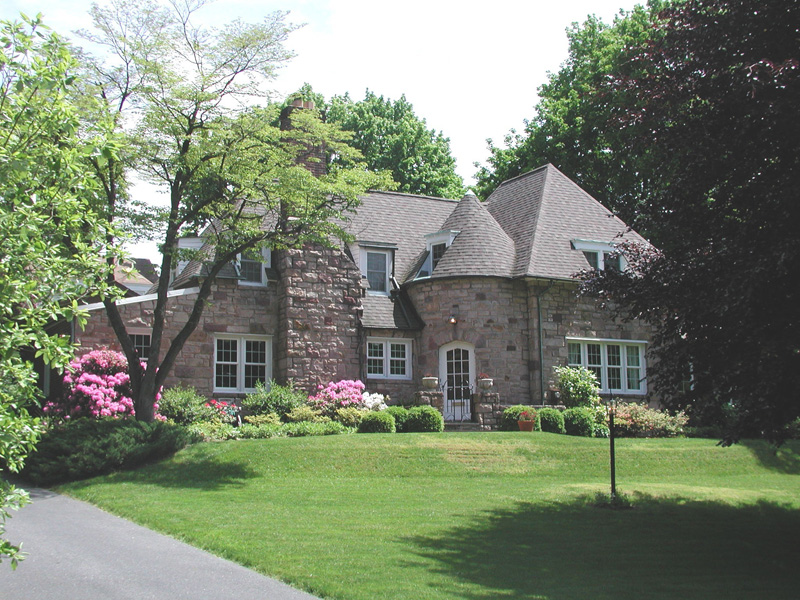 The Chateauesque style (1860 - 1910) was an effort to recreate the appearance and stylistic elements of the palatial French chateaus of the 16th century. Buildings of this style are almost always architect-designed, grand places intended to impress.

Details borrowed elements from the Gothic style and the Renaissance style, just as the original chateau designs did. The Chateauesque style was popularised in the US by by architect Richard Morris Hunt, the first American to study at the Ecole des Beaux-Arts in France.

Chateauesque style buildings are easy to identify due to their imposing appearance and characteristic complex roof line with abundant detailing. Buildings of this style have steeply pitched hipped (and sometimes gabled) roofs, topped by cresting or finials, and pierced by decorative gabled wall dormers.

Low relief carving may ornaments the dormer gables and window surrounds. Chimneys are tall and have decorative corbelled tops. Another stand-out feature is a round tower topped by a conical roof, although some more modest examples of the style (as per the top image) may omit the tower.

Balconies may feature Gothic-inspired quatrefoil or arched tracery patterns. Entry doors often have round arches or a flattened arch with an ogee arch moulding.

Most examples of this rather rare style are found in a sophisticated urban setting or on an estate where such opulent, high-style buildings might be expected.

After the turn of the 20th century, elements of the Chateauesque style were incorporated into a revival form sometimes called the French Eclectic style. Identified by a round tower with a high conical roof and steeply pitched hipped roof, this style often appears in early-20th century neighbourhoods along with other popular revival styles of the the era, such as the Tudor and Colonial Revival styles.

Retrieved from "https://www.designingbuildings.co.uk/wiki/Chateauesque_style"
Create an article