Recycling is the process of converting a waste material, such as glass, plastic, paper or metal, into a material that can be used for the same or alternative purpose.

Recycling has become an important part of community and business efforts to lower levels of material consumption, energy usage, carbon generation and landfill. It is part of the waste hierarchy – reduce, reuse, recycle. This suggests that it is most beneficial to the environment to reduce what we use in the first place. Where it is necessary to use things, we should then strive to re-use them, and only finally to recycle them if no further re-use is possible.

A recycled product will rarely be exactly the same as its original composition. For example, recycled paper contains ink residue and shorter fibres than virgin paper (made from wood pulp) and so may be less desirable for some uses. This 'inferiority' of some recycled materials is known as down-cycling, as a result of which, over time, some materials exhaust their recyclability and are no longer usable.

In some cases, however, materials can be up-cycled which means they are made into something more valuable than the original product (for example, using old bottles as lamps or an old suitcase as a medicine cabinet). The most common types of recyclable materials are:

Paper is sorted on the basis of its type, weight, use, colour and whether it has been previously recycled. Recycled paper results in significant net savings in terms of water and energy used, as well as the emission of pollutants.

The easy recyclability of glass means that there is almost no down-cycling and significant energy and cost savings over making new glass.

Steel is relatively easy to recycle. Once sorted, scrap steel is melted down and re-refined into large sheets or coils which are then shipped to manufacturers.

As the production costs of plastics are generally low, and due to its non-biodegradability, recycled plastic is usually reprocessed into a completely different form from their original state.

When these are recycled they can save up to 95% of the energy required to make new cans.

This is less common due to the labour-intensive methods required to separate the different components, and extract the often toxic materials included such as mercury, lead and chemical refrigerants.

EPS can easily be recycled into new foam packaging or durable consumer goods like cameras, coat hangers, CD jewel cases and more. You can recycle your EPS packaging by using EPS compactor

Organic waste can be composted and turned into fertilizer. Rubber tyres can also be shredded and reused.

Although recycling as a widespread concept has arisen only relatively recently with the new sense of environmental conscientiousness, it has been present in various forms for thousands of years. Recycling was a practical necessity prior to the Industrial age due to the fact that goods were not readily available at such cheap prices.

The Industrial Age fostered a new era of mass production which gave rise to a culture of disposability since goods could be produced and purchased cheaply, making more economic sense to throw them away rather than recycle them.

With the economic depressions of the 1930s and 40s, citizens of developed nations began to rely on recycling techniques as new goods were suddenly unaffordable. During the two world wars, many materials were rationed and recycled. In the post-war boom however, recycling slipped from widespread public consciousness, until the expansion of the environmental movement of the 1960s and 70s when recycling became a mainstream idea once again. During the late-20th century and early 21st century, as the threats of climate change have become more apparent, recycling programmes have become established and accepted as a central part of society.

The main reasons for the promotion of recycling include:

Raw materials such as trees, rocks, minerals and oil are 'harvested' and as a result, reserves of such materials are in decline. Mining and other extraction operations continue to have a negative impact on large areas of many countries around the world, such as deforestation.

The amount of energy required to create new products is frequently more than required for recycling. This does depend on the material though, as the manufacturing of plastic for instance can be inexpensive.

Pollution can be reduced as a result of recycling being more efficient and requiring less energy to operate than manufacturing processes.

Recycling helps to reduce the requirement for landfill. Landfill sites harm the surrounding environment and habitats, particularly as a result of the chemicals that can be produced when waste breaks down. These can contaminate land and water and cause and can be hazardous.

Interpretation of the various EU waste directives has been devolved in the UK, which means that waste policy differs in terms of pace, strategy and targets between England, Wales, Scotland and Northern Ireland. Generally each individual council in the UK has the responsibility to provide recycling services, as opposed to relying on instructions from county councils or central government.

There are numerous recycling symbols in use around the world. The most common are:

Universally recognised symbol that is used to identify a recyclable product. 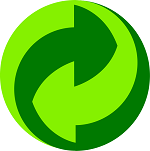 Widely used by European companies to demonstrate they have a process in place that helps to recycle packaging.

This symbol is widely found on bottles, jars and other recyclable glass products.

Widely found on soft drinks cans. Used to identify a product that has been made from recycled aluminium in accordance with the European CEN standard CR 14311.

Identifies a product that has been made from recycled steel in accordance with CR 14311.

Widely used across Europe to identify products recyclable under the Waste Electrical and Electronic Equipment Directive.

The UK construction industry is the largest consumer of resources, requiring more than 400 million tonnes of material a year (ref Davis Langdon). 32% of landfill waste comes from the construction and demolition of buildings and 13% of products delivered to construction sites are sent directly to landfill without being used (ref Technology Strategy Board).

Retrieved from "https://www.designingbuildings.co.uk/wiki/Recycling_explained"
Create an article