Our brief was to thoroughly refurbish and modernise the property to create a comfortable indoor environment whilst retaining and being sympathetic to the character and spirit of the cottage. The stunning views from the upper end of the garden were to be revealed and made available in all weathers.

An insulated lime plaster system was used for the wall finish at a nominal thickness of 40mm. The plaster being lime based is breathable, tolerant of moisture movement (both from penetrating damp and rising damp and as a buffer to vapour from the internal environment) and included sustainable cork insulation. The plaster followed the characteristic undulations of the wall and therefore character was maintained. The insulation value, although relatively modest on paper, is fully achieved as the material is in contact with the exterior wall and continuous with no gaps. With a more sympathetic insulation value to the traditional wall construction, we were confident that there would be no adverse effect on the dew point in the wall leading to future issues with interstitial condensation.

For the ground floor, we avoided the use of a concrete slab and DPM (damp proof membrane) that may introduce a rising damp problem at the walls and instead used a limecrete floor slab system incorporating a recycled glass insulated sub-base. The limecrete slab is breathable, does not significantly change moisture movement, allowed re-laying of the existing slate flags (lime mortar bedded and pointed) and had the added advantage of less formation depth than a modern concrete slab / insulation solution, which in turn reduced the need for underpinning of the existing walls. Underfloor heating was incorporated within the slab for comfortable and discreet space heating.

At the far end of the garden, the existing prefabricated garage and timber deck were removed and a new predominantly glazed single storey pavilion constructed with attached masonry garage. The pavilion was sited and orientated to capture the stunning views of the surrounding Lakeland fells. The pavilion consisted of two internally stone-faced masonry walls with the remaining elevations predominantly glazed with minimal interruption via the use of a steel frame. Further unobstructed views were achieved by setting the columns back from the external corner and cantilevering the roof structure over. Due to the unique shape of the room a flat roof was chosen in the design formed of a single ply membrane over warm roof insulation to negate any need for roof space ventilation.

The double glazing was fitted within a thermally-broken aluminium frame. Standard aluminium framing was used but detailed so that this was concealed at floor and ceiling level. At the external corner, the frame was omitted and the glazing butt jointed. The entire installation gave a very open feel to the interior and an unbroken view.

The pavilion and garage are designed to respond to the sloping site which led to a series of retaining walls through the site and along neighbouring boundaries. Structural waterproofing was carefully detailed and installed so as to provide full protection from damp issues. 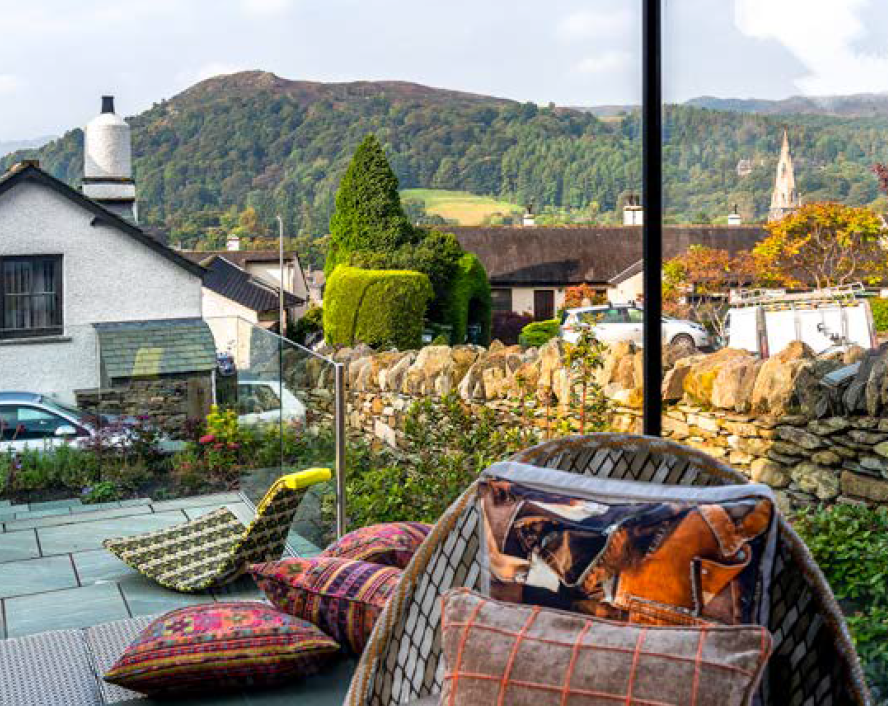 This article originally appeared in CIAT’s Architectural Technology Journal, published in Autumn 2018. It was written by John Coward Architects Ltd.