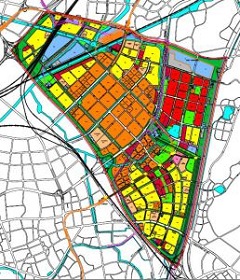 In May 2017, the first ever BREEAM Communities interim certificate was issued to Qinglong Mountain International Eco-city in Nanjing, Jiangsu Province of China.

With a population of over 8 million, Nanjing has long been a major centre of culture, education and research. Qinglong Mountain International Eco-city regeneration project is spread across 360-ha and is comprised of 11 residential buildings and supporting houses, office, retail, education and healthcare buildings.

Just like other major cities around world, Nanjing suffers from air pollution, traffic congestion and poor quality housing in some areas.

The site of Qinglong Mountain is of logistic importance as it connects various vital functional zones in Jiangning District (one of 11 districts of Nanjing). It is also under the influence of the East Asian monsoons and on the floodplain of the Yangtze River and thus subject to localised flooding.

The planning area holds typical subtropical monsoon climate features such as four distinctive seasons, humidity, heat and significant temperature differences between winter and summer. The main surrounding economic activities of this site are new technology and manufacturing industries and also agriculture. Previously the land was used as a settlement of improvised housing with very little permeable surface, poor drainage, services and facilities.

The People’s Government of Jiangning District chose to employ BREEAM Communities Scheme to address sustainability issues of Qinglong Mountain Project and achieve a high quality yet flexible design which turns this development into an exemplar of sustainable and ecological city nationally.

The result is a new development that is equipped to mitigate the risks of flooding and run-offs during the monsoon seasons, minimise operational energy demand, consumption and carbon dioxide emissions and complements, control air quality and enhances the existing economic wellbeing of the community.

BREEAM employed the bespoke assessment methodology to adapt to country’s specific regulation and planning requirements. At times in China, multiple authorities and local governments can be involved in the assessment of various issues of a site. The requirements of the BREEAM Manual were modified so that they would allow for the involvement of all necessary government bodies and local authorities.

A ‘job value and talent availability analysis’ of the development, inspired by the ‘skills gap’ analysis criteria of BREEAM Communities, helped to ensure that the development will have a positive net gain in employment in the region and local area.

This was achieved through creation of new employment based on the existing industry and also by attracting future inward investment based on the economic study of the site. Moreover ensuring community involvement in decisions affecting the design, construction and long-term stewardship of the development shapes the core of BREEAM Communities scheme.

As a result, community engagement has been an integral part the planning process of Qinglong Mountain International Eco-city to an exemplary level compared to similar projects in China. BREEAM Communities has also helped define baseline standards for ecology, energy use and transportation strategies and social well-being for the region and the development.

Throughout all the BREEAM Communities assessment issues such as ‘Demographic needs and priorities’, ‘Economic Study’ and ‘Ecology Strategy’ the masterplan for the site has also accounted for future challenges and needs and as such, it will remain fit for purpose for years to come.

This project represents a new notion of development for the region with a shift towards more liveable, workable, affordable, sustainable and well connected communities. The BREEAM Communities certification at this stage represents the developers and masterplanning teams’ commitment to sustainability all the way through construction and handover of Qinglong Mountain International Eco-city.

This article was originally published here on 25 May 2017 by BRE Buzz. It was written by Rose Pourmatin.

Retrieved from "https://www.designingbuildings.co.uk/wiki/New_Chinese_approach_to_masterplan_designs"
Create an article