An overwhelming 86% of respondents said that green buildings will become more valuable. Since then, the pressures on real estate owners and managers to make their properties more sustainable have continued to grow.

However, there is more to sustainability in the built environment than ‘being green’. It involves integrating a wide range of environmental, economic and social issues in a way that improves a building asset for its owners and users, and protects and enhances its value as an asset.

[edit] Recognising and realising the value of sustainable real estate

These complexities, and the need to reliably assess and distinguish properties with sustainability credentials from the rest, have prompted the development of a number of assessment and certification schemes.

The most widely used and successful of these throughout Europe is BREEAM, originally developed in the UK by BRE and managed across Europe through a network of National Scheme Operators. BREEAM has become the certification scheme of choice for investors and developers as it is an internationally recognised standard for sustainability that is applied on a national basis.

Using independent, licensed assessors, BREEAM examines scientifically-based criteria covering a range of issues in categories that evaluate energy and water use, health and wellbeing, pollution, transport, materials, waste, ecology and management processes. Buildings are rated and certified on a scale of ‘Pass’, ‘Good’, ‘Very Good’, ‘Excellent’ and ‘Outstanding’. BREEAM covers new and existing buildings, and is developing a number of schemes aimed specifically at the refurbishment market.

There is an increasing evidence base that BREEAM-rated buildings provide increased rates of return for investors, and increased rental rates and sales premiums for developers and owners.

A study carried out by Maastricht University and published by the Royal Institution of Chartered Surveyors (RICS) in March 2012 entitled ‘Supply, Demand and the Value of Green Buildings’ provided empirical evidence of the value of BREEAM certified buildings. The study used a sample of office buildings in London, using data from transactions and found that these buildings achieved:

It should be noted that building quality is not taken into account, and there is a ‘gentrification’ effect whereby individual building values can decrease relative to the supply of other green buildings in the neighbourhood.

BREEAM In-Use was developed to improve the sustainability and reduce the operating costs of existing buildings. Following its success in the UK there has been a growing interest in the scheme in other countries. To give those outside of the UK the opportunity to gain full certification, ‘BREEAM In-Use International’ has been developed.

BRE Global consulted the market to understand which functionality would add most value to the BREEAM In-Use online platform. It became clear that three major pieces of work were required. In May 2018, BRE Global announced that these have either been released, or are currently under development.

Before the introduction of this Evidence (Beta) module, evidence had to be uploaded on a question by question basis, which could be an inefficient way of demonstrating compliance with the BREEAM In-Use question set. Evidence can now be uploaded through the traditional browse function, or through the newly added ‘drag and drop’ function, enabling users to upload large numbers of files quickly and effortlessly.

Once uploaded, the evidence is stored in a central location, allowing users to tag these pieces of evidence to all of the relevant questions it relates. This gives users improved visibility of their evidence collection, and avoids users having to upload the same piece of evidence multiple times. 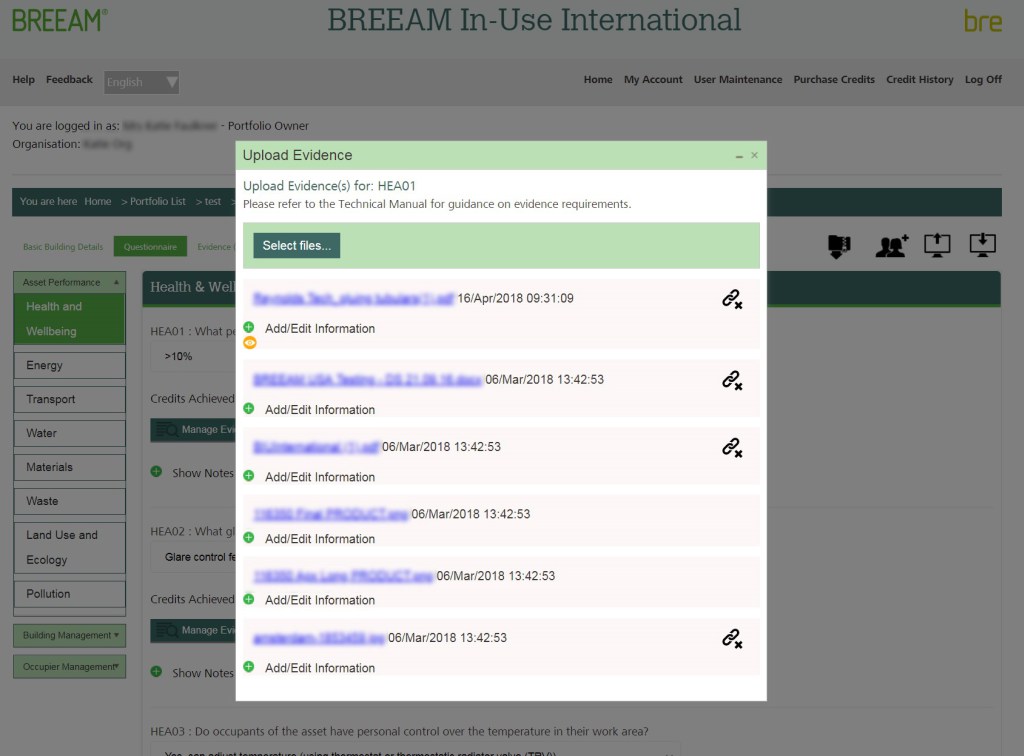 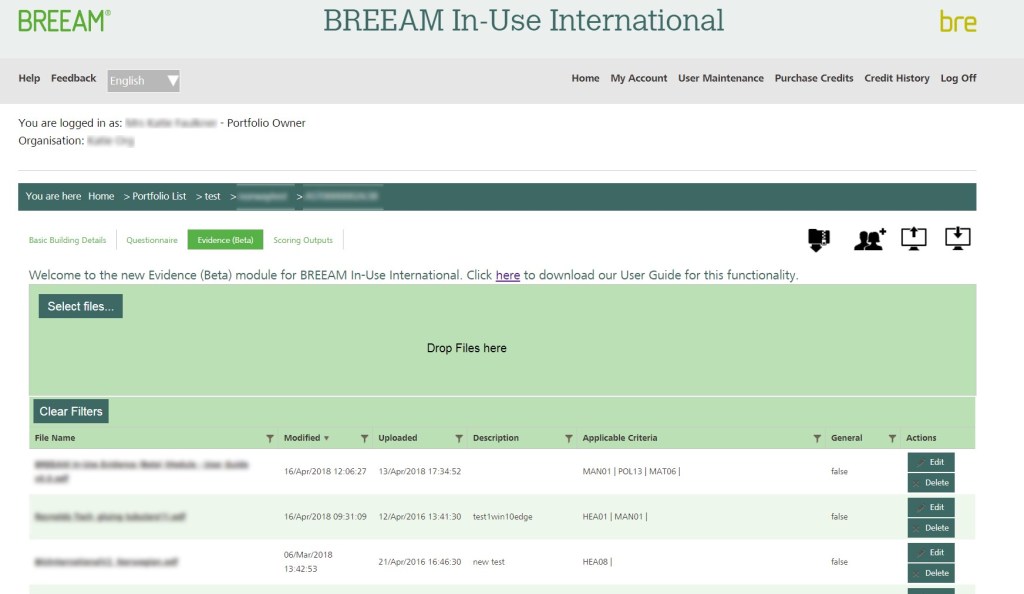 There is huge potential for the BREEAM In-Use online platform to produce tailored informative reports for an organisation based on their portfolio of assets. This led to the development of the ‘Online reporting platform (Beta)’.

This new reporting area will allow users to see an overview of their assessments in report formats. The first of these is described below:

Portfolio Overview Report – This allows the user to see an overview of their assets within their account. The data within the report can be adapted to illustrate either, the overall score/rating, the individual environmental category scores, or the performance levels for individual questions. The user will also be able to filter this data to show specific assets. For example, those assets of a particular type (e.g. offices), or within a particular location (e.g. located in France).

This functionality is designed to give users improved visibility on whether a BREEAM In-Use licenced Assessor has verified the evidence and answer options selected within the online platform. This will facilitate improved communications between the client and the Assessor, providing clarity on where additional evidence needs to be provided in order to award credits.

By using a simple traffic light system (red/amber/green), red illustrating non-compliances; amber showing where questions are pending Assessor review; and green to demonstrate Assessor verified content, it provides all stakeholders with quick and clear visibility of the progress of an assessment.

This functionality will also enable BRE Global to put in intelligent safeguarding, such as not allowing assessments to be submitted to the BRE Global Quality Assurance process until every question (which scores credits) has been verified by the associated Assessor.

This update was originally published here by BRE Buzz on 2 May 2018. It was written by Daniel Skidmore.

This article was created by --BRE Buzz.

It originally appeared as Driving sustainable real estate across Europe and beyond written by Martin Townsend and published on 28 January 2016.

Retrieved from "https://www.designingbuildings.co.uk/wiki/BREEAM_In-Use_International"
Create an article