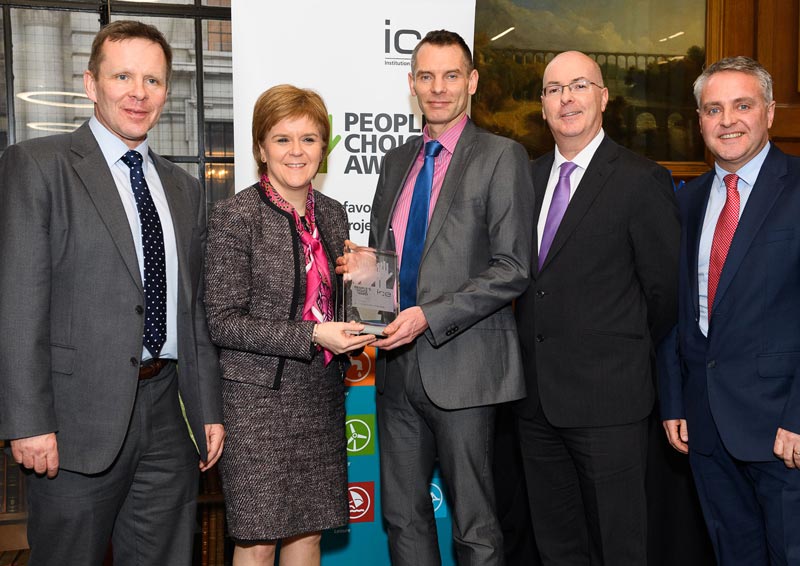 On 23 January 2017, the Forth Road Bridge reopening was announced as being the Institution of Civil Engineers (ICE) People’s Choice Award winner, voted for by the public as the greatest civil engineering achievement of 2016.

Scotland’s First Minister Nicola Sturgeon presented the winners, Transport Scotland and Amey, with the new trophy at a ceremony at ICE’s UK headquarters at One Great George Street, Westminster on Monday.

Sir John Armitt, Deputy Chair of the National Infrastructure Commission and ICE Past President, also spoke at the ceremony. 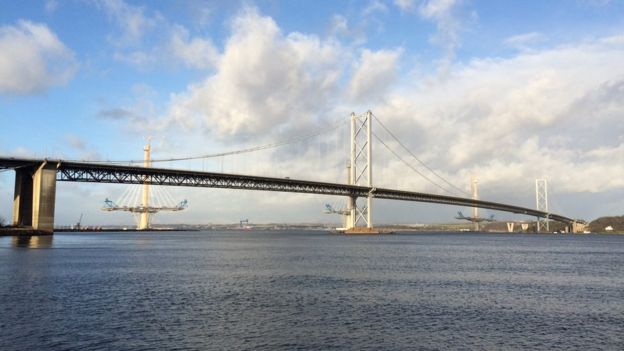 The Forth Road Bridge carries 70,000 vehicles each day and is a vital connection both for commuters into Edinburgh and between central Scotland, the north and east. Its closure in December 2015 led to a 33-mile diversion for travelling public, creating significant disruption.

Civil engineers worked around the clock to repair the fractured truss-end link which caused the closure. Their expertise and dedication enabled the bridge to reopen to traffic ahead of schedule and in time for Christmas, and later for HGVs.

Social media kept an anxious public and politicians informed and engineers became the heroes of the hour as images of them suspended 50 m above the water in wintry weather went viral, showcasing civil engineering on a global stage.

The bridge was one of 12 nominations from across the UK. The other nominees were as follows:

The Royal Society for the Protection of Birds’ (RSPB) Wallasea Island Wild Coast project is a landmark conservation initiative that used waste from Crossrail tunnelling to create flood protection and a wetland habitat.

The South Devon Highway has taken traffic away from Kingskerwell village and improved access to Torbay and South Devon. Congestion and accidents have been reduced, jobs created and flood risks reduced.

Reconstruction of a 58 m six span iron railway viaduct in a flood plain with reinforced concrete structure during a single 76-hour period.

The Lee Tunnel provides London with a 21st century sewer network by preventing 16 m tonnes of sewage overflowing into the River Lee annually.

Major refurbishment that transforms Birmingham New Street Station into a travel, retail and leisure destination at the hub of the Britain’s rail network, serving 170,000 passengers a day.

New visitor centre/apartments at 13th century Harlech Castle created by restoring, conserving and extending the Victorian building and linked to the castle gatehouse via an innovative yet sympathetic pedestrian footbridge.

The station kept working during the redevelopment – the centrepiece of a £1bn-plus improvement programme for rail passengers across the north. Victoria Station is one of the north’s busiest railway stations with over 7 million passengers a year, combined with a tram station.

State-of-the-art entrance provides a direct link to the city’s growing south bank area – saving some 20,000 passengers a day up to an hour of travelling time.

This footbridge links the two sides of Belfast’s River Lagan providing greater access to the heart of the city and the enabler of other regeneration projects.

Complex earthworks and site dewatering formed part of the reconstruction of a 300 m section of road near Rothbury, following a major landslip in December 2012.

“This prestigious award is significant in that it was voted for by the public in their droves and saw off competition from the rest of the UK. The strength of feeling in terms of appreciation, community spirit and respect for those who fixed the bridge is clear for all to see in the thousands of votes cast.

"It is very fitting that the unsung heroes responsible for producing such an innovative solution under intense pressure have been recognised for their efforts. They worked tirelessly in extremely challenging weather conditions to repair and reopen the bridge. The collective response to this unforeseen event was remarkable and reinforced Scotland’s solid reputation for engineering excellence.”

Andy Milner, CEO at Amey, which maintains and repairs the bridge, said:

“The work to repair the Forth Road Bridge represented a true logistical and engineering challenge. Amey's full breadth of capability and knowledge was used to re-open the bridge ahead of schedule. We feel extremely proud to have been involved and to have received this award.”

This article was originally published by ICE on 23 Jan 2017. It was written by Rory MacLeod.

Retrieved from "https://www.designingbuildings.co.uk/wiki/ICE_Peoples_Choice_Award_2017"
Create an article