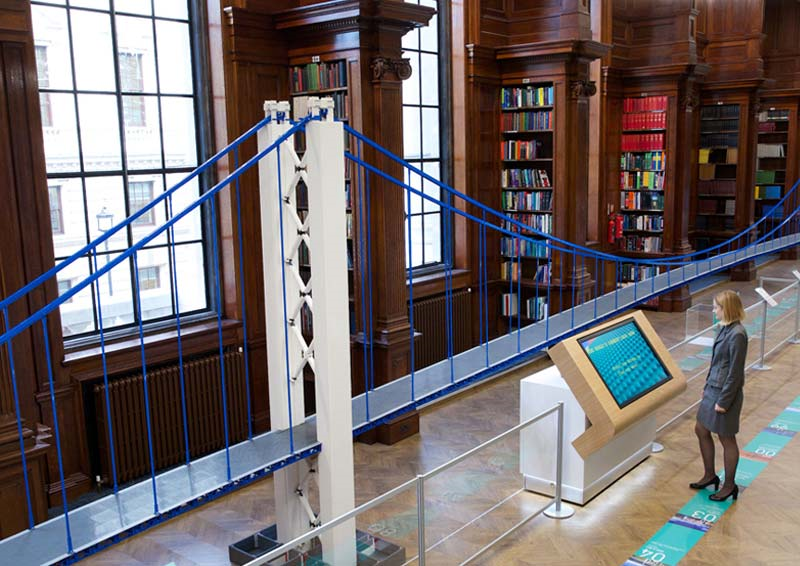 In October 2016, the ICE Bridge Engineering exhibition opened for six months at their headquarters in Westminster. The exhibition celebrates the engineers who have created some of the world’s greatest bridges.

The centrepiece of the exhibition has broken the Guinness World Record for the longest single bridge span created entirely out of LEGO bricks, without glue or structural supports. ICE's bridge has a single span of 16.46 m, beating the previous record of 14 m. Together with the two interconnected side spans, the bridge has a total span of 31 m and stands at more than 3 m tall. The bridge weighs three-quarters of a ton and is constructed using more than 200,000 individual plastic bricks.

Claire Gott MBE of global consultancy WSP | Parsons Brinckerhoff, whose bridge engineers oversaw the construction of the LEGO bridge said: “Bridges are normally built out of things like steel and concrete – engineers know nearly everything there is about those types of materials, and can predict their physical behaviours. As a construction material, we didn’t know much about the material properties of LEGO, so it was really exciting to see actual bridge engineers finding solutions to ensure this vast model suspension bridge remained upright.”

The wider exhibition explains how bridges have transformed lives and provides an insight into the creative minds of the engineers who designed and delivered them. It tells the human, social and engineering story of bridge building and demonstrates the value that infrastructure delivers to communities around the world.

Visitors are guided on a tour of historical structures such as Thomas Telford’s classic Menai Strait suspension bridge, modern masterpieces including the 50-year-old Severn Bridge, and transformational structures of the future such as Scotland’s famous Queensferry Crossing.

In an interactive zone, visitors, including children, are able to 'become' civil engineers and construct their own bridges.

Bridge Engineering marks the start of a five-year programme of infrastructure-focussed exhibitions at ICE’s One Great George Street. The programme aims to wrap science and engineering together in a fun, informative way and to inspire the next generation of Brunels.

ICE President Sir John Armitt said: “Set in the international tourism spot of Parliament Square in Westminster, this exhibition space provides the built environment industry with the perfect stage to speak to the public – where we can tell the inspirational story of how infrastructure transforms people’s lives. Most important of all, it is a place for the public to explore the wonders of the built world around us.”

The exhibition is held at The Institution of Civil Engineers, One Great George Street, Westminster, London, SW1P 3AA. It runs Mondays to Fridays, 10am to 5pm until Spring 2017.

Retrieved from "https://www.designingbuildings.co.uk/wiki/Bridge_Engineering_exhibition"
Create an article