Building archaeology is the discipline of reconstructing the history of existing buildings using direct observations. Archaeologists can trace a structure’s past by analysing data such as materials, building techniques, how elements connect with one another, and so on. In a similar way to architectural conservation, building archaeology uses scientific and analytical techniques to describe, assess and date structures.

The main difference between building and excavations archaeology is that the latter requires invasive digging procedures in order to make visible the sources of data, whereas on the whole, a building can be analysed by observation of its exposed surfaces, materials and building techniques without impacting upon the structure itself.

Establishing timelines may not always be the main point of interest for the archaeologist, but it may be necessary to understand dates to obtain an accurate and thorough description of a building’s development, as well placing data within some kind of historical context, which can help identify explanations for the building.

Some of the methods that an archaeologist can use are set out below.

The aim of stratigraphy is to reconstruct the sequence of constructive and destructive events that have impacted upon the existing building.

The representation technique is based on the ‘stratigraphical unit’ (SU) concept, that is, a part of the building that was the result of a single action of construction. Archaeologists try to pinpoint ‘positive SUs’ (additions) and ‘negative SUs’ (deletions) on the timeline of the building.

Chrono-typology is a dating method based on identification of architectural features from different historical periods rather than on the building itself. It involves using a reference database that assists with the identification of particular construction elements and associating them with the relevant period.

If architectural elements can be dated to a definite range of years, perhaps from inscriptions or documentary evidence, then similar elements of a building may be dated to the same period.

The distinctive features of an element may include materials, construction techniques, dimensions, shapes and so on.

A classification process is essential for creating a useful database. Typically the steps include:

Dendrochronology, also known as ‘tree ring dating’, is a technique that involves reading the sequence of ring thickness values of a timber element. This can identify the date that the timbers were felled.

A tree gains another ring each year as it grows, with the thickness depending on the amount of growth. All the same trees in a region are likely to display the same chronological growth pattern. Therefore, by plotting the relative thickness of these rings, a clearly identifiable sequence of variations may emerge which can act like a date stamp for each period.

Master chronologies that span many centuries have documented tree ring data, enabling the cross-matching of historic timbers from existing buildings to determine the origin of timbers.

The advantage of dendrochronology is its objectivity. Where analysis results in a clear match with the master chronology the results are completely accurate and reliable.

Rectified photography is a method of recording a high level of detail on flat objects. The effects of distortion as a result of perspective are removed, and the image scaled upon one or more principal planes of the object.

Each photo should be taken square on to the object, with the effects of perspective removed if possible by shifting the lens accordingly. Effort must be made to work in good lighting conditions, as shadows can result in a loss of information.

Surface areas requiring repair or conservation can easily be measured and calculated from the images. For example, rubble-built walls can be costly to have drawn stone-by-stone, but individual stones will be clearly visible in a rectified photograph and areas requiring repointing, consolidation or replacement can be marked up on the image and measured.

This method can also be used to produce images to be enhanced for visualisation purposes, such as for site interpretations or reconstructions.

Photogrammetry is the practice of obtaining information about physical objects through the process of recording, measuring, and interpreting photographic images. It is most commonly associated with the production of topographic maps through aerial survey, but may be used in any situation that requires accurate three-dimensional data or precise drawings, and is ideally suited to the survey and measurement of buildings and monuments.

Suitable photographs, usually stereoscopic, are taken on site, with a ‘control’ network established to determine the photographs’ scale and orientation. Photographs are taken using precision cameras, usually known as metric cameras, and full stereoscopic coverage of the building is produced. Control information may be either taped distances on the building façade, or the establishment of 3D coordinates of either target markers or identifiable points of detail.

The usual end-product of a photogrammetric survey is the production of either digital data or a line drawing. The data may be formatted for use in CAD systems, offering the advantage of flexibility. As the process requires photography, this may become the end-product itself, either archived as they are, or as a rectified mosaic composed of a number of scaled photographs joined together.

Retrieved from "https://www.designingbuildings.co.uk/wiki/Building_archaeology"
Create an article

Just under half of England’s busiest bridges are severely defected or damaged, but have remained open due to concerns about an influx of traffic should repairs be ordered, it has been revealed.

The issue focusses on the future of an historic city – Oxford – and includes an introduction by Layla Moran MP, Chair of the new APPG on Conservation, People and Places which has the IHBC as its Secretariat. 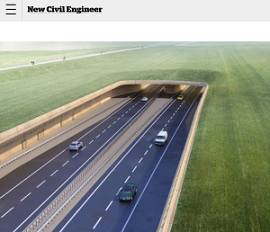 Opponents of the Stonehenge Tunnel have instructed lawyers to examine the legality of transport secretary Grant Shapps’ decision to give the scheme the green light.