There have been many recent changes in the British, European and World technical standards relating to clean indoor air quality and the air filter performance testing. New standards have been developed in response to the need to breathe clean healthy air by occupants of city buildings.

The need for clean air that can be inhaled without risk to health does not change whether inside or outside a building. However outside air in UK cities has been a cause for concern for many years. This concern has mainly centred around the high levels of traffic air pollution in the form of fine combustion particles (PM1, PM2.5) and the associated combustion gas nitrogen dioxide (NO2). There are a large number of medical studies giving details of the negative health effects of exposure to these and other outdoor sourced air pollutants.

The World Health Organization (WHO) publish annual mean exposure limits for fine PM particles and gases such as NO2 that are hazardous to health. This is useful because these limits can be used to define and classify how clean or polluted air is in respect of these air pollutants.

Ventilation of city buildings is a normal requirement when occupied by people. Outside air must be drawn into the building to reduce the inside level of carbon dioxide, a waste gas produced by people. This supply air, as it is called, needs to be cleaned of PM1, PM2.5 particles and of nitrogen dioxide. Once this is done the outside air can be introduced into the building diluting and ultimately displacing the inside air along with its pollutants.

Air pollution, as mentioned before, comes in two different forms, namely particles and gases. There are two different types of air cleaning filters to deal with them and there is a technical standard for each. The current relevant standards are as follows:

Another useful source of guidance is the EUROVENT 4/23 (2018) document from the European ventilation manufacturers association that gives detailed applications and building function recommendations for clean air SUP levels. 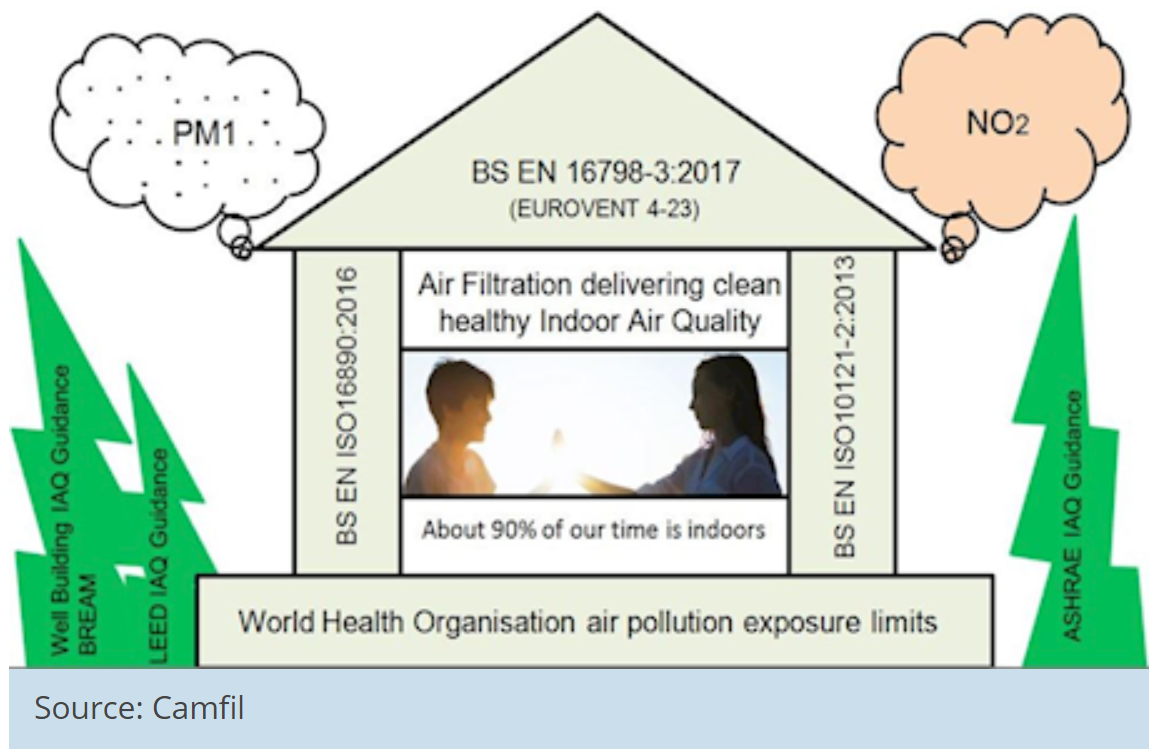 Indoor sourced air pollution is also present and needs to be considered. The most encountered indoor air pollutants are gaseous Volatile Organic Compounds (VOCs) and Aldehydes such as Formaldehyde (CH2O). Organic gases and odours may also be a problem and, in certain areas of the UK Radon, a radioactive gas can find its way into basement areas from bedrock below.

Indoor sourced particles tend to be larger sized and of a biological nature such as mould spores, skin flakes and expelled aerosols. They can harbour bacteria and be infective which is of greatest concern in hospitals and healthcare facilities or schools.

The health issues relating to airborne combustion particles largely stem from their small size and therefore their capability to penetrate the human body. If these particles are also toxic or of chemically damaging nature they have a double jeopardy.

For example, in the performance classification ePM1 85%, 'e' denotes filtration efficiency, 'PM1 is the particle size range and 85% is the tested removal efficiency for PM1. Because this performance is easy to understand, HVAC air filter performance is now transparent and understandable to the end user.

As a guideline ePM1 rated air filters should be used as a minimum for all city located buildings occupied by people.

If low energy air filters are used (Eurovent A or A+ rated) not only pollution but also costs can be minimized. It is however worth noticing, that both can only be achieved at the continuous, desired level if regular maintenance of the filters is ensured.

Using the latest technical standards mentioned above, it is possible to calculate the required air filter efficiency, with accuracy, by knowing the inside and outside levels of air pollution for the building under consideration. For example, local air monitoring data for levels of air pollutant of concern can be measured directly or even found by looking at local authority air monitoring stations. In London for example, King’s College have a historic database and map presenting annual mean levels for several air pollutants of concern.

The table below, extracted from Eurovent document 4/23 provides information about categories performance for each of the standards (use colour coding for guidance) 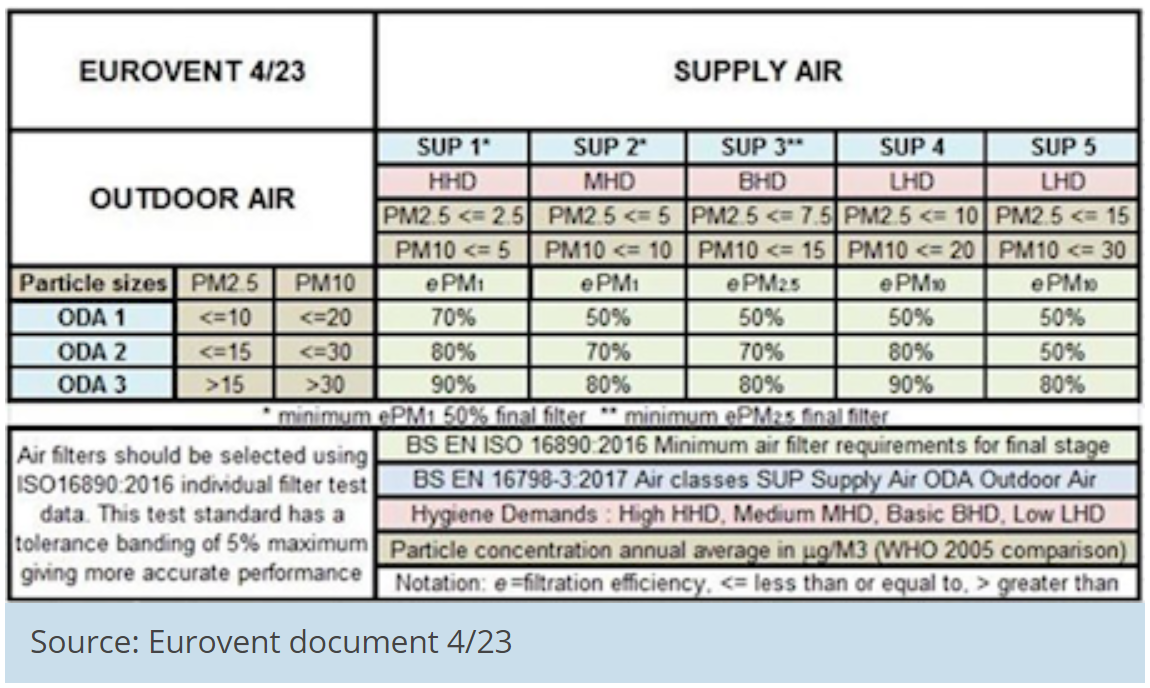 An inside/outside ratio of air pollution concentrations will give the required air filter efficiency which will be usually about 80% to 90% for most large city locations such as London. This will show a reduction from ODA3 (over 1.5x WHO limit) down to SUP2 (under 0.5x WHO limit) typically.

We are entering an age where we can control our environment at home and work by measuring and monitoring clean air and removing air pollution so that we can breathe without risk to health and with benefit to wellbeing and performance.

The latest technical standards for the air cleaning products give us ability to protect ourselves with effective solutions. Let’s use them.

This article was originally published as ‘New air filtration and clean Indoor Air Quality Standards. An important step forward to improve control of air quality in buildings’ by BSRIA in February 2020. It was written by Peter Dyment.

Retrieved from "https://www.designingbuildings.co.uk/wiki/Air_filtration_and_clean_indoor_air_quality_standards"
Create an article