What has the UK done about carbon reduction since the Paris Agreement?

Philip Pascall, Chair of the Institution of Civil Engineers (ICE) Energy Expert Panel, considers the UK’s progress since the Paris COP21 agreement – the topic of discussion at an ICE evening event on 23 November 2016. This article was originally published by ICE as What has the UK done about carbon reduction since the Paris Agreement? on 28 October 2016. 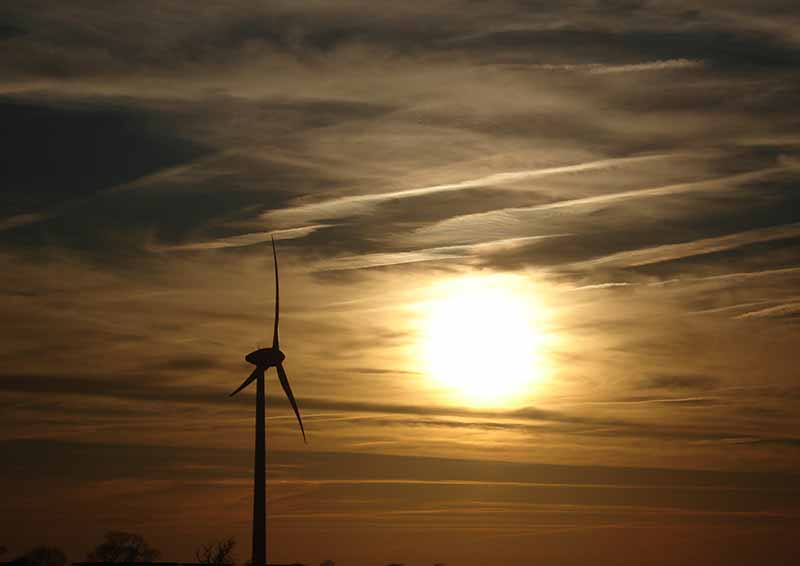 The UK needs a clear and consistent energy policy to match its leadership in introducing the Climate Change Act 2008.

Following the COP21 agreement in Paris last December and the EU referendum outcome we might ask ourselves – what is actually happening with energy and our intentions to reduce carbon?

The UK hasn't ratified the COP21 treaty. The Department for Energy & Climate Change (DECC) has been dissolved. As has the Energy and Climate Change Committee (ECCC), which recently pointed out that the UK is likely to miss 2020 renewable energy targets. Clearly, the UK energy policy vacuum remains and there are also concerns about affordability and security of supply.

On the positive side it looks like the new nuclear station at Hinkley is finally going ahead, China leads the world in the development of renewables (followed by the US), and both China and the US have ratified COP21.

And at ICE, climate change issues are at top of our energy agenda. Our evening event on 23 November 2016, What does the Paris Agreement on climate change mean for civil engineering? will take a close look at what the UK needs to do.

There is plenty to worry about. Global average temperatures in 2016 are among the highest on record and atmospheric CO2 concentration has reached 400 ppm: 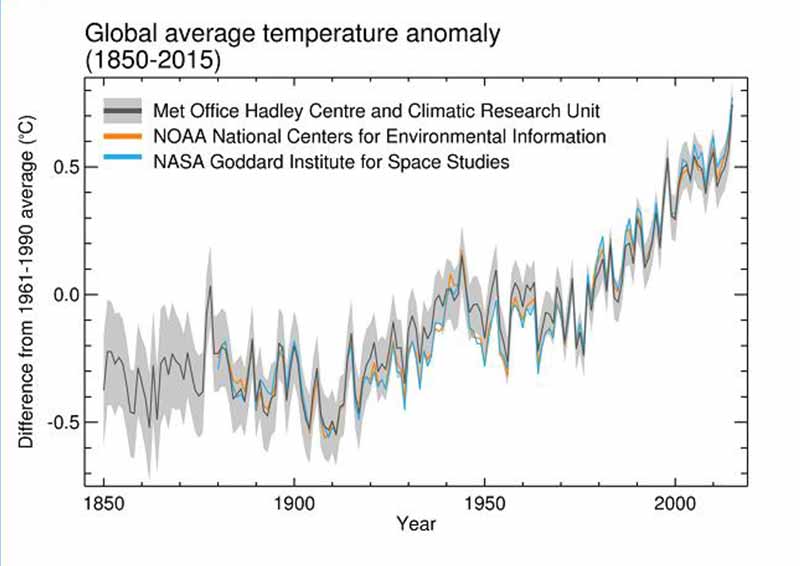 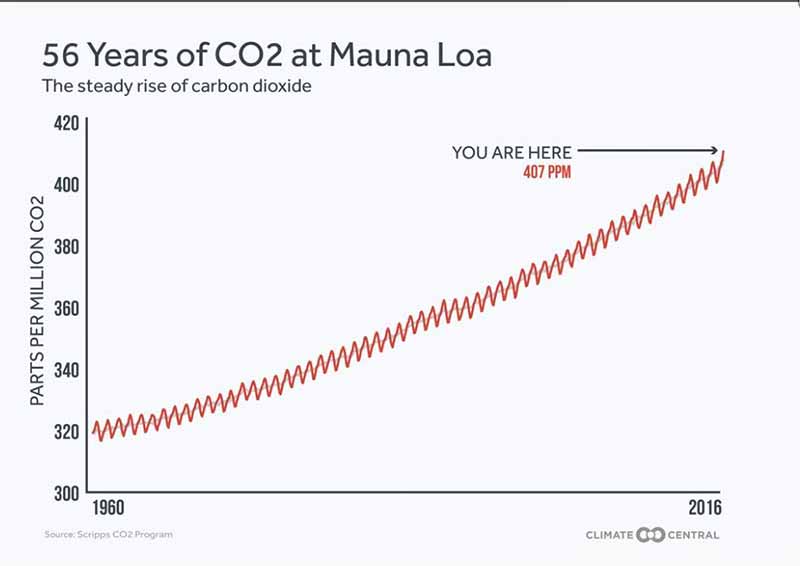 One reason given was that EU member states wish to ratify the treaty in a co-ordinated fashion and to set national targets first. However, the EU as a whole plus seven member states have signed, so why is the UK hesitant? Presumably, uncertainty about the UK's position post-referendum.

The best way to look at this is that energy has to be integral with business and industrial strategy. I just hope that's the real reason. If it isn't, it will be even harder to achieve climate change goals.

Whatever the motivation behind the departmental changes, Brexit is a massive diversion causing a hiatus across all departments, pending recruitment, re-organisation and working out what Brexit actually means.

At the recent ICE debate This house believes that the UK energy industry is not fit for purpose, there was a majority in favour both before and after the speakers' presentations and Q&A. But the message was clear: we can be fit for purpose and we must make the changes.

To start with, we should help clients set the right brief with the objectives of zero carbon and sustainable energy – that we will not emit any CO2 emissions. The challenges are massive and we need to get on with it.

UN Secretary General Ban Ki-moon was quoted at the event: "Ours is the first generation that can end poverty, and the last that can take steps to avoid the worst impacts of climate change."

In its excellent report, the ECCC says that on its current course the UK will fail to achieve its 2020 renewable energy targets (that 15% of all energy, 10% of transport fuels and 12% of heat must come from renewable resources). Poor progress on heat and transport, notwithstanding better progress on the 30% target for electricity generation, will most likely result in failure to meet the overall target.

These interim targets are legally binding along with an 80% reduction in carbon emissions by 2050. The report contains recommendations that government should follow – including, notably, the adoption of a whole systems approach.

The UK needs a clear and consistent energy policy to match its leadership in introducing the Climate Change Act 2008 (which included the 2050 target).

In 2011, government published The Carbon Plan which set out how the 'UK will achieve decarbonisation …… to make the transition to a low carbon economy while maintaining energy security, and minimising costs to consumers ….' through a series of carbon budgets.

The government also published the 2050 Pathways Calculator which facilitates analysis of options for achieving decarbonisation goals.

What we really need though is a UK energy policy that can be seen to be credible through such analysis, to which successive governments adhere and which gives confidence to industry and investors.

That doesn't mean it has to be totally rigid. Circumstances change, so adjustments – "light touches on the tiller" – will be necessary. These can be prescribed according to progress across a range of parameters. F or example, subsidies for solid wall insulation could be increased or decreased to keep within the range of expected number of installations shown in Chart 1 of The Carbon Plan [page 6]: 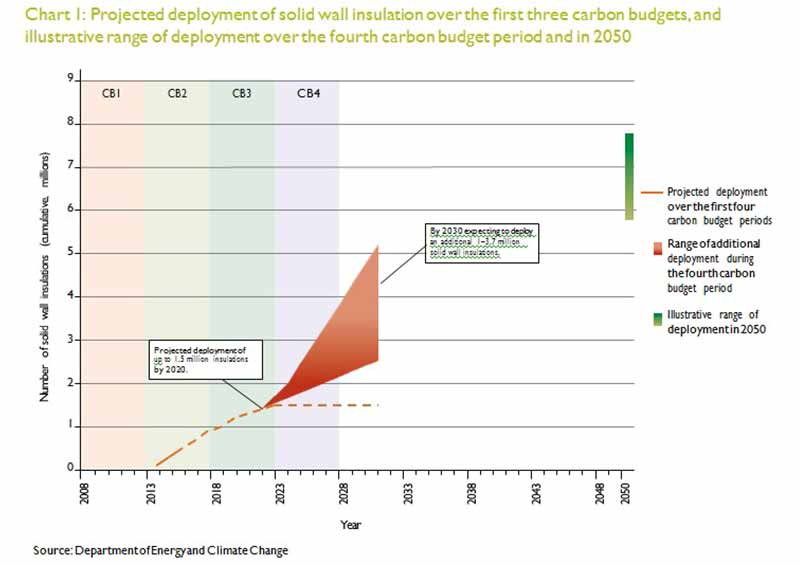 Considering the importance of all three prongs of the trilemma – security of supply, affordability and decarbonisation – the UK urgently needs new sources of electricity.

This fact is graphically illustrated by massive peaks (between 29 and 40 pence per kWh cf an average of about 6.4p/kWh) in the wholesale price of electricity on three successive days in September 2016:

The precise reasons are varied and may be unusual but these high prices, albeit for short periods, are indicative of the UK's narrowing capacity margin.

Consumers, both domestic and industrial, may regard energy prices as being high. The media gives prominent exposure to alleged overpricing, attracting customers with low tariffs that go up in time, and the difficulty that many families on low incomes have in affording the electricity and gas they need.

The last of these at least is genuine. However, fossil fuel prices are at such a low level that investors are not even proceeding with combined cycle gas turbine stations which are probably the cheapest and quickest to build, and most profitable, of any type of power station.

As described very well by Peter Dixon in 'Electricity – we're having the wrong conversation' in Infrastructure Intelligence, we need to be prepared to pay more. The much-debated Contract for Differences strike price for Hinkley Point C is fair.

We must look for more ways to address all three prongs of the trilemma.

[edit] Using carbon as a proxy for cost

There is growing evidence to show that reducing carbon reduces cost – with an emphasis that this means whole life carbon, cost, and of course value.

This was one of the points made at that recent ICE debate and demonstrated by Anglian Water's development of PAS 2080, the new standard for managing carbon.

The National Infrastructure Commission reported that consumers could save up to £8bn a year by 2030 through 'smart power' incorporating interconnectors, storage, demand management and efficiency.

I believe that this is the area where engineers should have the greatest influence and effect. PAS 2080 provides a clear process, with metrics. We should follow its guidance on new projects to the maximum extent possible and encourage our clients to do likewise. Reducing cost and increasing value are strong incentives for any business or investor.

We, the UK – whether that's government, industry, engineers or individuals – have a great opportunity for national and international leadership, possibly enhanced by Brexit.

We "just" need to show how it's done.

Look out for ICE's Energy, Resilience and Climate Change campaign in 2017 which will explore how industry can tackle some of the critical challenges we face, including:

Retrieved from "https://www.designingbuildings.co.uk/wiki/What_has_the_UK_done_about_carbon_reduction_since_the_Paris_Agreement%3F"
Create an article