Foundations provide support for structures, transferring their load to layers of soil or rock that have sufficient bearing capacity and suitable settlement characteristics to support them.

Raft foundations are a type of shallow foundation. They are typically formed by reinforced concrete slabs that cover a wide area, often the entire footprint of a building. They spread the load imposed by a number of columns, walls, and so on, over a large area, and can be considered to ‘float’ on the ground in a similar way to a raft floating on water. Also known as mat foundations, they are often used for lightly-loaded buildings on weak or expansive soils such as clays or peat.

There are several different types of raft foundation, which are selected depending upon the structural system and loads to be supported.

This is a reinforced concrete slab of uniform thickness covering the whole bearing area. This can be used when columns are positioned at equal distance with equal loads distributed on the foundation. Two steel meshes are generally used as reinforcement, one placed at the bottom of the slab and the other at the top, to counteract upward and downward bending forces.

Flat raft mats are commonly used for the construction of small dwellings.

Generally, top soil is removed and a 50-75 mm-thick blinding layer of concrete spread to provide a base. It is on this base that the concrete raft is cast. With the blinding dry, the damp proof membrane is laid to protect the raft from rising moisture causing damage. The reinforcement is positioned and the concrete poured and consolidated.

In terms of finishing, it can be poured to ground level or left just below the surface. A 50 mm-thick layer of concrete can be spread over the raft to raise the level, providing a smooth finish for floor coverings to be laid. Alternatively, if the floor needs to be raised above ground, a raised floor may be constructed on top of the raft surface.

This type of solid slab is used where the poor compressibility of the ground would necessitate an uneconomically thick slab. To take the load at the external leaf of cavity walls, a reinforced concrete toe extends as a base. This is cast from a stiffening edge beam, and is typically taken to a minimum depth of 750 mm. The shape of the extended toe allows the external brick outer leaf of the cavity wall to be finished below ground. 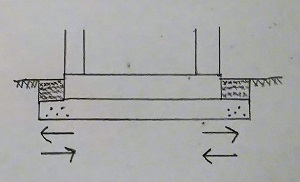 The slip plane should be of sufficient thickness to resist tensile or compressive ground strains, as well as accommodating potential frost heave.

This type of raft is used to achieve a composite action that can disperse edge loads or imbalanced loads. It involves a stone blanket layer being built up from the reduced sub-strata level. This can be built up in localised soft spots or depressions. The concrete raft is poured on top of the blanket, . The interaction of the raft and blanket helps span the loading over the particularly weak areas. 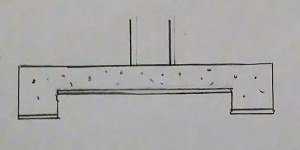 This type of raft foundation is typically used where there are unequally-distributed column loads. Reinforced concrete or steel columns are positioned on intersections of reinforced concrete ground beams, which add the required stiffness to the slab.

Although it is usual for the raft to span over the ground beams, they can also be designed as upstand beams with a precast concrete suspended floor at ground level. This then creates a void between the raft and the ground floor.

This type of raft foundation consists of two slabs with two-way interlocking ground beams. The upper (suspended) slab and the lower (ground bearing) slab are usually incorporated within the beams to form I-sections, with voids between them.

Cellular raft foundations are very rigid, making them suitable for heavy loads or loose soil that can be subject to uneven settlement. They are commonly found on sites that have been used for heavy mining activity or in poor ground where large bending moments need to be resisted.

Where a raft foundation may not satisfy the design requirements, it can be enhanced by the addition of piles, creating what is known as a piled raft foundation. This can improve the performance of the foundation in reducing the amount of settlement and differential settlement, as well as improving the ultimate load capacity. Piled raft foundations are an increasingly popular choice for high-rise buildings.

Who do I make reference to.