How to design a pad foundation 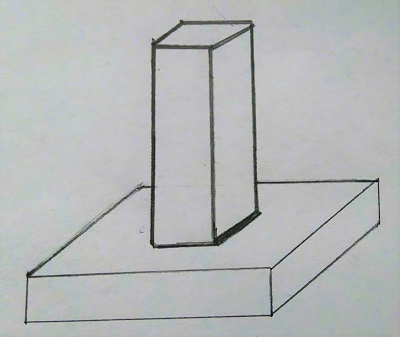 Pad foundations are a form of spread foundation formed by rectangular, square, or sometimes circular concrete ‘pads’ that support localised single-point loads such as structural columns, groups of columns or framed structures. This load is then spread by the pad to the bearing layer of soil or rock below. Pad foundations can also be used to support ground beams.

A pad foundation should be designed to effectively spread a concentrated force into a bearing stratum. They are a popular design solution as they are generally cost-effective and are relatively easy to design and construct, and are suitable for most subsoils except loose sands, loose gravels and filled areas.

In order for pad foundations to spread the load into the soil, the pad must be either sufficiently deep (allowing the force of the load to spread out at a pre-defined angle), or be constructed with adequate reinforcement. The soil’s bearing capacity, as well as the concrete’s strength, are the factors that define the angle of the load’s spread.

The following table should be referred to when determining the spread of force within an unreinforced concrete pad.

a = the projection from the face of the column

hf = the depth of the footing

(Ref. Manual for the design of concrete structures to Eurocode 2.)

For low-rise buildings, it is generally recommended to limit the overall depth of a pad foundation to 1 m from ground level. When designing the pad, care should be taken to ensure that it is large enough to prevent tension within the concrete, which could result in cracking and failure.

Reinforced concrete pads should be designed so that the depth is sufficient to resist a shear force known as ‘punching shear’. This can develop around the perimeter of the column, wall or other vertical component that the pad is supporting. Bending can also occur as the pad footing spreads the load onto the stratum.

To resist bending moments, the pad footing should be designed so that the force is applied within the middle third of the base. This is known as the ‘middle third rule’ – a design practice that means the size of the foundation is defined according to the resultant force’s centralisation. There is an equation that defines the distribution of compression stress across the pad foundation:

Uplift can occur if the applied force lies outside the middle third of the base. What this means is that where the applied forces are greater than, and acting in the opposite direction to, the self-weight of the pad, it can cause the pad to lift. The equation for calculating the value of the applied bearing stress on the soil is as follows:

Biaxial bending moments can also be applied to pad foundations. For more information, see Biaxial bending. The equation used to calculate the bearing stress in the soil is as follows:

Depending on the loads, either welded steel fabric or reinforcing bars will be necessary, and arranged in both directions.

It is common to approach the design of the pad as though it were an inverted cantilever supported by the column and carrying the pressure of the soil.

The reinforcement must be designed to be capable of resisting the bending stress, and is similar to that of floor slabs.

Retrieved from "https://www.designingbuildings.co.uk/wiki/How_to_design_a_pad_foundation"
Create an article