[edit] What is the New Silk Road?

The Silk Road was the name given in 1877 by the German geographer Ferdinand von Richthofen to the ancient network of trade routes linking China to central and western Asia, India and the Mediterranean region.

Today, China is breathing new life into the Silk Road with the goal of forging stronger relationships with its neighbours through the development and sharing of resources.

President Xi Jinping, speaking at the World Economic Forum 2017 in Davos, referred to the ancient Silk Road, highlighting the fact that international trade is an inherent human activity that helped in the past to maintain peace and stability over long periods of time.

[edit] What is its potential?

Today, the New Silk Road, or what is known as the Belt and Road Initiative (BRI), has the potential to prompt a profound shift in the global order towards a new multilateralism. In a narrow sense, the BRI is primarily a strategic infrastructure initiative of historic proportions. The planning and delivery of scalable infrastructure for power generation, transportation, water supply, and telecommunications will bring much-needed economic and societal connectivity to the 65 countries along this new network.

Through the BRI, China is proposing to share its immense financial and industrial resources and capabilities, as well as its experience of four decades of reform and opening-up, while securing its own long-term development.

The BRI makes a unique contribution to international cooperation and economic development: it is based on the stakeholder approach, it seeks to leverage market forces in best ways, it prepares best for the age of the Fourth Industrial Revolution, it is built on the open-platform concept and, most importantly, it is the positive narrative the world needs.

Beyond the initial commitment by the Chinese government of about $1 trillion in infrastructure development, which conservative estimates believe to be viable, the BRI will require roughly an aggregate of $6 trillion for the next 15 years to finance infrastructure projects fuelling the Belt and Road economies.

During that period, the Chinese plan to cumulatively invest $4 trillion in total – about 20 times the size of the post-Second World War Marshall Plan investment of $17 billion, which has a value of about $190 billion today. Several multilateral development banks have also committed to support the BRI to accomplish those ambitious goals and finance BRI-related projects.

[edit] What are the eight steps towards shared prosperity and a sustainable future?

To avoid being locked into unsustainable patterns of development, which has been the common pitfall of large-scale strategic infrastructure projects, we anticipate eight transformation factors that have the potential to provide high-level stewardship for the BRI and revive the spirit of shared prosperity. These insights are derived from several years of analysing the infrastructure industry and its development projects.

To avoid being locked into unsustainable patterns of development, which has been the common pitfall of large-scale strategic infrastructure projects, we anticipate eight transformation factors that have the potential to provide high-level stewardship for the BRI and revive the spirit of shared prosperity. These insights are derived from several years of analysing the infrastructure industry and its development projects. 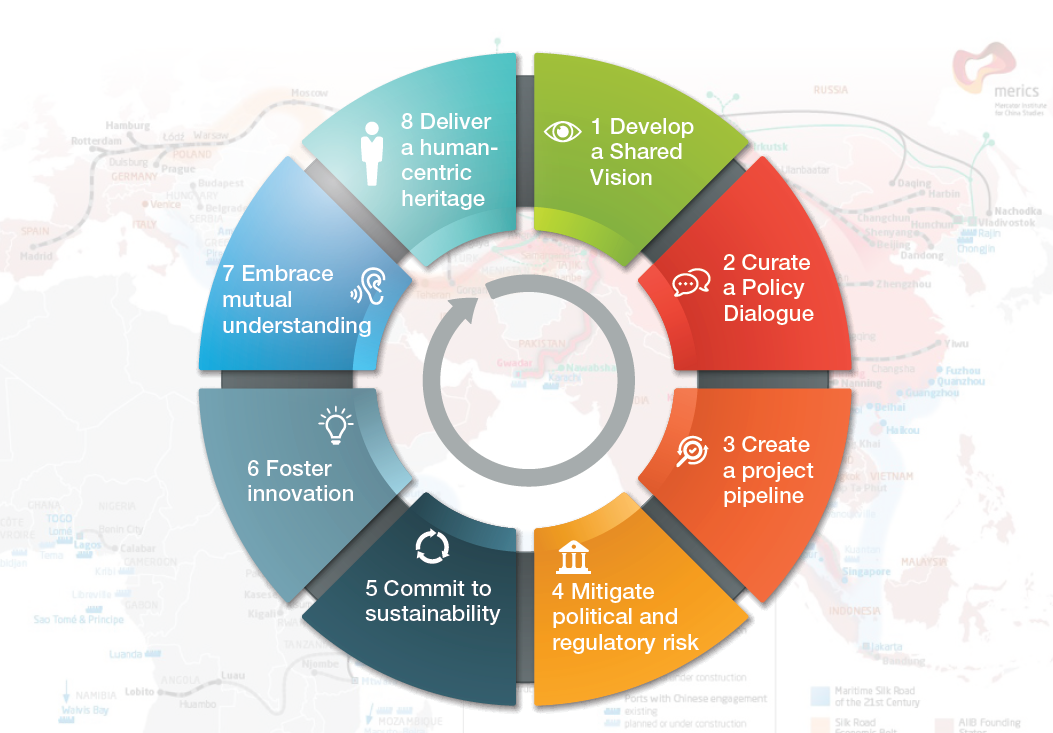 Achieving transnational and international support for a shared vision for strategic infrastructure development that promotes wellbeing and a national sense of purpose to the communities beyond national borders.

Creating an infrastructure project-preparation facility to ensure a pipeline of bankable projects and a transnational centre of excellence to deliver the largest portfolio of projects ever.

Proactively mitigating political and regulatory risk to boost stakeholder engagement and confidence in the plan by investors, off-takers and operators.

Committing to sustainability, inclusion and affordability principles to generate value for future generations beyond Agenda 2030.

Read more on what it takes to implement the eight steps towards shared prosperity and a sustainable future here.

Retrieved from "https://www.designingbuildings.co.uk/wiki/The_New_Silk_Road"
Create an article