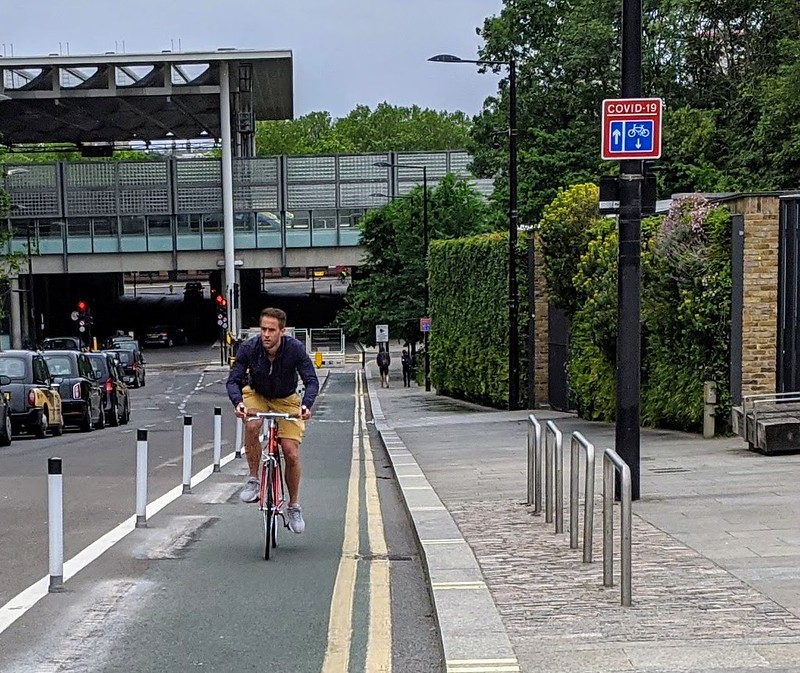 In May 2020, UK Transport Secretary Grant Shapps announced £250m in emergency funds to be invested in infrastructure modifications that would support cyclists. This included the introduction of pop-up cycle lanes, wider pavements, safer junctions and bus-only corridors. In some instances, the pop-up cycle lanes would also be used as priority lanes for emergency vehicles.

The investment in this initiative has been incorporated into a £5 billion, five year funding package allocated for the redevelopment of bus and cycle links for every region of the country outside of London. These ‘Mini-Holland’ schemes are intended to improve safety for pedestrians and cyclists in town centres across the country.

Pop-up cycle lanes are created by reclaiming space from automobiles on roads. This temporary measure is accomplished through the use of bollards, traffic cones or other devices to establish a safe lane for cyclists.

Both temporary and permanent cycle lanes are designated by markings to restrict motorised vehicles and inform cyclists and pedestrians. Cyclists are not required to use these lanes, although it is recommended.

Unless pavements are marked as shared spaces for cyclists and pedestrians, they should not be used by cyclists. In the case of shared spaces, pedestrians have right of way and cyclists must yield to them.

The government is using the pop-up cycle lane initiative as a method of encouraging cycling as a healthier form of commuting. The goal is to reduce demand for public transport while simultaneously decreasing the number of cars on the road. Longer term benefits include cutting pollution levels and supporting healthier behaviours.

The government is funding efforts throughout the country and is working with local authorities to improve both urban settings and smaller neighbourhoods. This is sometimes referred to as tactical urbanism, pop-up urbanism, DIY urbanism or guerilla urbanism, due to its relatively low cost and temporary nature.

In greater Manchester, the goal is to establish 150 miles of protected cycle track. Transport for London (TfL) is planning a “bike Tube” as part of its Streetspace plans.

The temporary aspects of the Streetspace programme were announced on 6 May 2020. However, there is the possibility that some of the more beneficial improvements will become permanent. This will only take place after statutory consultations are held.

Those Streetspace cycle paths deemed successful will be added to London’s Cycleways (formerly known as Cycle Superhighways and Quietways). This collection of cycle lanes is being developed to connect communities, businesses and destinations across London in one cycle network.

On 27 July 2020, the Government announced plans to tackle obesity, which has been linked with complications that occur in people who contract COVID-19. Increases in physical activity, such as cycling and walking, have been part of the Government's strategy to encourage exercise by making it safer and easier to cycle and walk in areas where paths were previously non-existent or unsafe.

The initiative, which will cost £2bn, will include:

Retrieved from "https://www.designingbuildings.co.uk/wiki/Pop-up_cycle_lanes"
Create an article