A succession of reports have considered how to tackle these issues, including; ‘Reaching for the Skies’ in 1934, the Simon Report in 1944, the Banwell report in 1967 and the Latham Report 'Constructing the Team' in 1994, in which Sir Michael Latham described the industry as ‘ineffective’, ‘adversarial’, ‘fragmented’ and ‘incapable of delivering for its customers’. 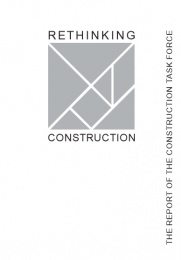 In the report, Sir John Egan suggested that ‘the industry as a whole is under-achieving’, and called for ‘dramatic improvements’. He proposed that this would be possible ‘…if we focus all our efforts on delivering the value that our customers need, and if we are prepared to challenge the waste and poor quality arising from our existing structures and working practices’.

Egan stated that ‘…we are not inviting uk construction to look at what it does already and do it better; we are asking the industry and Government to join with major clients to do it entirely differently’.

The report set very ambitious targets of annual reductions of 10% in construction cost and construction time and a reduction in defects of 20% per year.

Within the report, Egan insisted that the industry must replace competitive tendering with long term relationships based on clear measurement of performance and sustained improvement in quality and efficiency. Chapter 4: paragraphs 67 to 72 deal with the establishment of long-term relationships. Specifically:

A number of other organisations were established following the Egan Report:

Since then, there have been significant moves in government procurement to encourage collaborative working and foster partnering, and it is generally considered that construction has become more efficient and safer (ref Constructing Excellence and Glenigan: Industry performance report).

However, the Egan report was not entirely welcomed by the industry, and there was some perception that applying experience in manufacturing to an industry as different as construction was unrealistic. In May 2008, ten years after publication of Rethinking Construction, Sir John Egan stated that ‘we have to say we’ve got pretty patchy results. And certainly nowhere near the improvement we could have achieved, or that I expected to achieve…..I guess if I were giving marks out of 10 after 10 years I’d probably only give the industry about four out of 10’ (Ref. Egan: I’d give construction about 4 of 10.)

In 2009, 'Never Waste A Good Crisis' - A Challenge To The UK Construction Industry was written by by Andrew Wolstenholme of Balfour Beatty Management for Constructing Excellence. It was intended to assess the progress that the industry has made since Rethinking Construction and concluded that, ‘Since 1998 we could have had a revolution and what we've achieved so far is a bit of improvement.’

In 2011, the Government Construction Strategy, made a damning assessment of the industry, similar to that of the Egan report, suggesting amongst many criticisms that:

Like the Egan report, the Government Construction Strategy states an intention to achieve significant savings (15 to 20%).

Given that despite all of these reports, the perception of the industry as wasteful and adversarial remains, and that significant savings continue to be projected if the industry reforms, it might be inferred either that; under the circumstances the industry operates more effectively than it appears from the outside; or that expectations are unrealistic; or that recommendations have been consistently poorly implemented.

It is worth noting that criticism of construction is not peculiar to the UK, and that for example similar assessments have been made in the USA (Ref. Constructing the team: A US Perspective, King 1996).