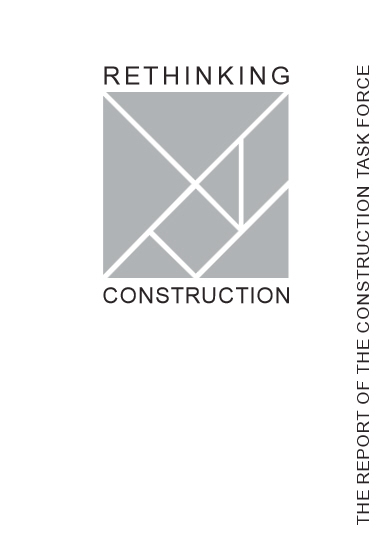 Sir John Egan (born 1939) is a British industrialist of the automotive, airport, construction and water sectors. He was born in Lancashire to a garage-owning father and later studied petroleum engineering at Imperial College, London.

His lasting legacy to the construction industry will be the Egan Report published in 1998. Titled ‘Rethinking Construction’, it was an attempt to improve the quality and efficiency of the UK construction industry. The report proved influential and to some extent radical as it did not merely ask for construction improvements but for the industry to join with the government and major clients to start doing things ‘entirely differently’. It identified five key drivers of potential change and four key elements combined with ambitious annual targets in reducing costs, time and defects.

In 2002, Egan published a follow-up report entitled Accelerating Change. He was later to write ‘Saving Jaguar’ which chronicled his time as CEO and chairman at the car giant from 1980 to 1990. He subsequently went on to serve as CEO of BAA from 1990 to 1999, and held a variety of non-executive business roles.

In 1997, deputy prime minister John Prescott commissioned Sir John Egan to chair the Construction Task Force and follow-up on the findings and recommendations of the 1994 Latham Report. The aim of the Task Force was to look at construction from a client’s perspective and advise on how to improve its service, quality, and products and to be more in-tune with customer requirements.

The Report’s recommendations centred on improving quality through waste reduction and eliminating non-value-adding activities. From his experience in more technically-advanced industries such as automotive and aviation, Egan was aware just how much it took to become a modern industry.

Egan also suggested the government was a poor client, set seven targets for cutting costs, improving predictability and eradicating defects and advocated the ‘lean’ production techniques of the automotive sector.

The report shook the industry, setting ambitious targets of annual reductions of 10% in construction costs and construction time and 20% in defects. Many comtractors regarded this as a slap in the face and were uncertain that the techniques pioneered in the automotive sector were right or applicable to construction. In particular, the focus on ‘lean’ production with its emphasis on ‘off-site’ and collaborative working would take years to start making any real impact. Indeed, by 2008, although the report was still on the agenda, the industry remained wide of the mark: anti-competitive behaviour was still rampant, as was bid-rigging, and while defects had been cut, they were nowhere near reaching the Egan targets. Lean was also way off the mark and developing slowly with only 15% of companies achieving Egan's targets.

Egan himself stated at the time that he would only give the industry four out of ten in terms of its adoption of the report’s principles.

Just over 20 years since the report was commissioned, things have progressed – sluggishly. Modular construction is slowly moving into housing, health and safety (particularly mental health awareness) are moving closer to the top of the agenda, collaborative working has become a buzz phrase, there is better management and supervisory skills, and an emphasis on long-term relationships instead of competitive tendering, while public sector bodies are slowly learning to become best-practice clients. Measuring productivity has also become better ingrained.

But the question remains, in the wake of the Egan Report, how satisfied are clients with the industry?

‘Accelerating Change’ was published in 2002 by the Strategic Forum for Construction, chaired by Sir John Egan. In it, he built upon and reaffirmed the principles set out in ‘Rethinking Construction’, particularly that the industry was still underachieving.

It identified three main drivers to accelerating change in the industry:

The aim was to try and get the industry to realise maximum value for all clients, end users and stakeholders through the consistent delivery of world-class products.

Taken together, Rethinking Construction and Accelerating Change have undoubtedly had a beneficial effect on construction although not with the intensity that Egan would have originally liked. Nevertheless, the industry has seen increased awareness and improvements in health and safety, partnering, collaborative working and off-site construction. Technological developments since the reports were published are also moving things along, particularly BIM and 3D-printing.

Retrieved from "https://www.designingbuildings.co.uk/wiki/Sir_John_Egan"
Create an article