Display energy certificates (DEC's) show the energy performance of a building based on actual energy consumption. For certain types of building, they must be displayed prominently in a place visible to the public and are intended to raise public awareness of the energy use of buildings. 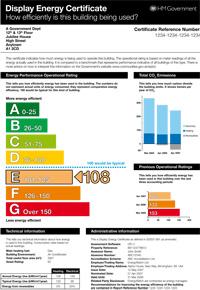 They are valid for one year and must be updated annually, although for buildings less than 1,000 square metres they are valid for 10 years. An advisory report must also be prepared every seven years giving recommendations to owners and occupiers about making their building more energy efficient.

Department of Energy and Climate Change (DECC) research Exploring the use of Display Energy Certificates, published in July 2013, suggested that, for organisations that are not engaged in energy management, collecting the information required can lead to a better understanding of energy usage. It can also provide building managers with evidence to help make the case for changes resulting in greater energy efficiency. For organisations that are already engaged in energy reduction, they help confirm which buildings are inefficient or those buildings that are not operating according to their design predictions.

Display energy certificates can also be prepared for other buildings on a voluntary basis, and it was originally expected that the mandatory requirement would be rolled out over time to a wider range of buildings.

However, on 11 February 2015, the Department for Communities and Local Government (CLG) launched a consultation document, Display Energy Certificates: current regime and how it could be streamlined and improved, suggesting that, ‘It is possible that the current regulations for the issue and display of energy certificates in public buildings have gold-plated the requirements of the Directive.’

The consultation closed on 11 March 2015 and since then no decision appears to have been made. It is considered by some that the fact Eric Pickles' successor Greg Clark has been silent on the matter for so long, suggests the issue has been dropped, but in the absence of a statement on the matter from government, there remains uncertainty.

Retrieved from "https://www.designingbuildings.co.uk/wiki/Display_energy_certificate_DEC"
Create an article