This article originally appeared in Context 145, published by The Institute of Historic Building Conservation in July 2016. It was written by Aitziber Egusquiza, Carsten Hermann and Dennis Rodwell. 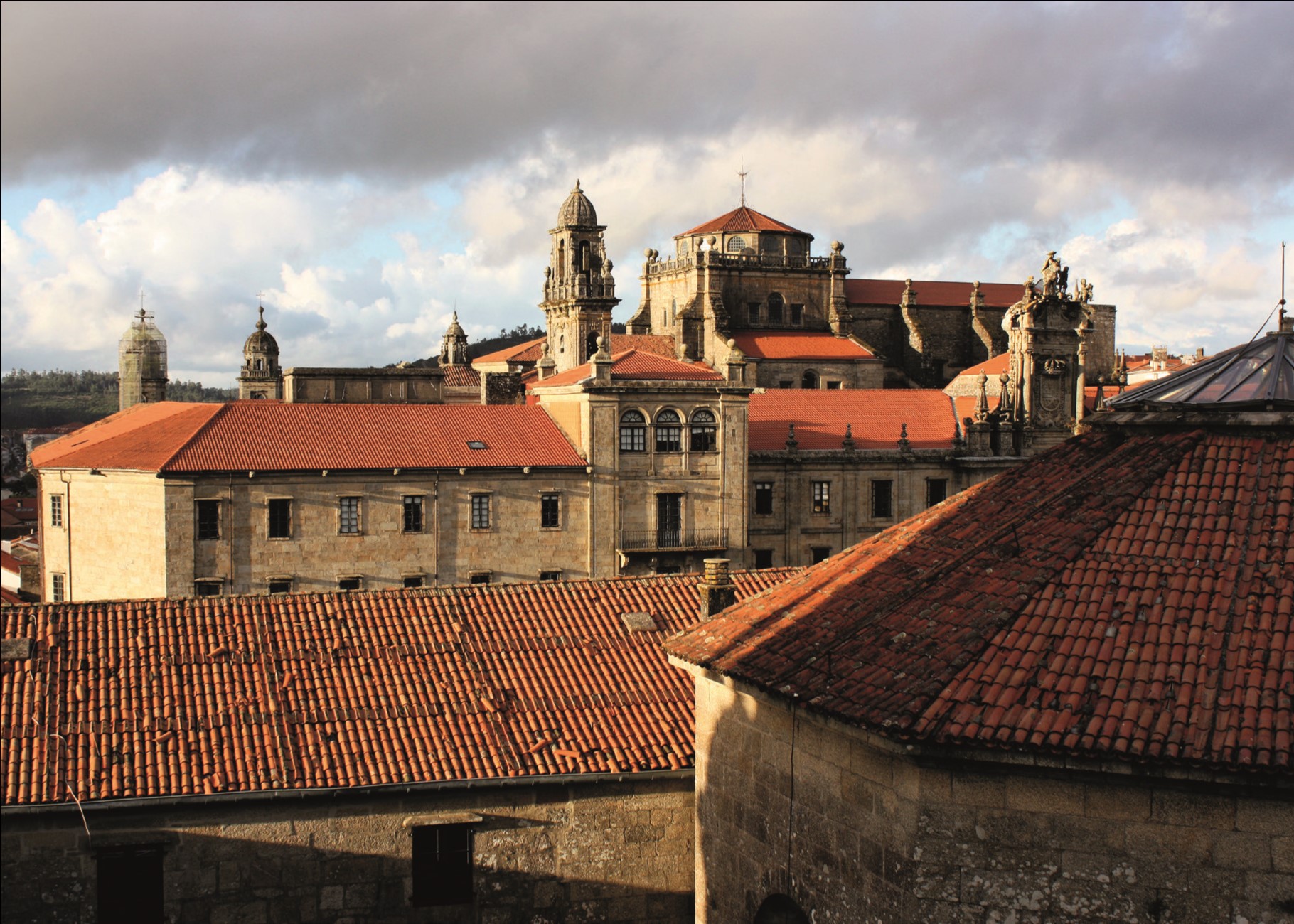 [Image: The medieval old town of Santiago de Compostela, Spain, was one of the case-study sites (Photo: Dennis Rodwell)]

An EU research project has investigated measures and tools to make significant improvements to the energy efficiency of European historic urban districts.

The article ‘Retrofit measures for historic buildings and cities’ (Context 142, November 2015), described several of the technologies for building fabric retrofit as well as energy management systems that have been investigated in the European research project EFFESUS (the acronym for ‘Energy Efficiency for EU Historic Districts’ Sustainability’). [1]The research into innovative measures to improve energy performance forms an important part of the overall EFFESUS project, of which a further vital component has been the design, production and testing of a decision support system (DSS), to facilitate informed decisions that balance the protection of heritage significance with the aim for improved energy performance at the scale of historic urban districts.

The DSS is an online expert software tool that helps users to identify and prioritise retrofit measures to improve the energy performance of a specific historic district. The selection process is based on two datasets: first, location-specific data about the district’s characteristics; second, generic information about available retrofit measures and indicators to assess these measures. The second is not specific to a particular location and is stored in a technical repository, created as part of the EFFESUS project. The location-specific district input and the information from the technical repository are used by the DSS to produce a priority list of packages of retrofit measures which should be suitable in the context of the specific historic district that is being studied.

In order to build this priority list, the DSS additionally translates the preferences of the user regarding five criteria (thermal comfort, energy savings, indoor air quality, cost and low-impact solutions) into weighted criteria using the analytic hierarchy process. The process transforms the comparison of criteria by pairs into the different weightings that are chosen by the user. This then synthesises the decision-maker’s judgments, and allows priority rankings of the alternatives to be obtained for each criterion, with an overall priority ranking.

The accuracy of decision-making and consequently the DSS outputs depend on the availability, completeness and quality of the building stock data for the historic district in question. These vary significantly across Europe. To make the DSS as widely useable as possible, it allows for two different forms of assessment: the transferable model approach and the simulation approach.

In situations where only very limited data is available, the DSS bases its assessment on urban typologies: the transferable model approach. To input the location-specific data, the software user is guided through a process of questions and predefined answers to assign to the city district a type which describes it sufficiently to identify suitable retrofit measures.

In cities where good quality data is available, the DSS assessment will use the simulation approach to iteratively model the impacts of the different retrofit measures listed in the repository. The district data, which can come from existing sources or field assessments, need to include a heritage significance assessment, which is likely to be the result of fieldwork by heritage specialists. The available district data is collated into a spatial data model which the DSS can interrogate.

Ideally, data would be available for every building in a district. In practice this is rarely the case. Accordingly the DSS offers the option to reduce the size of the data model through a building stock categorisation tool. For this, a number of sample buildings, taken from the total building stock in the district, will be selected which describe the district sufficiently well to allow the identification of retrofit measures suitable for the majority of the district’s buildings. Criteria used in this categorisation include building age, floor area and three-dimensional form, use, construction type, and the differing levels of heritage significance that are ascribed to its diverse building elements (including roof and wall constructions and their external and internal finishes, windows and doors). 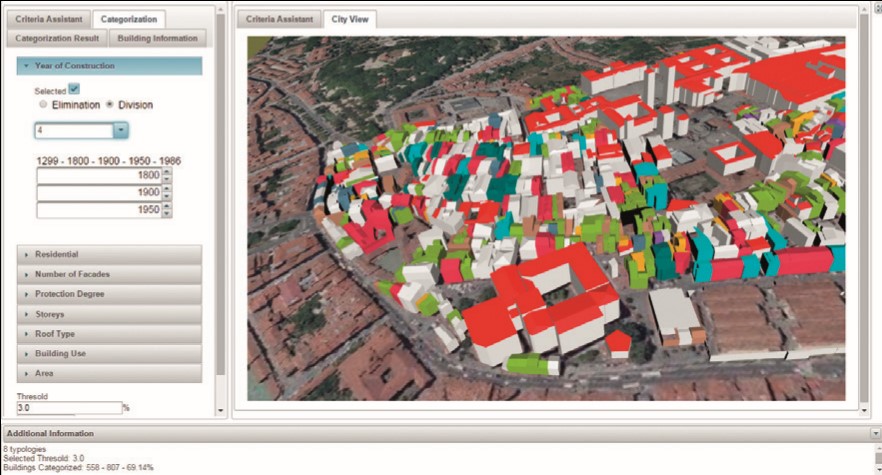 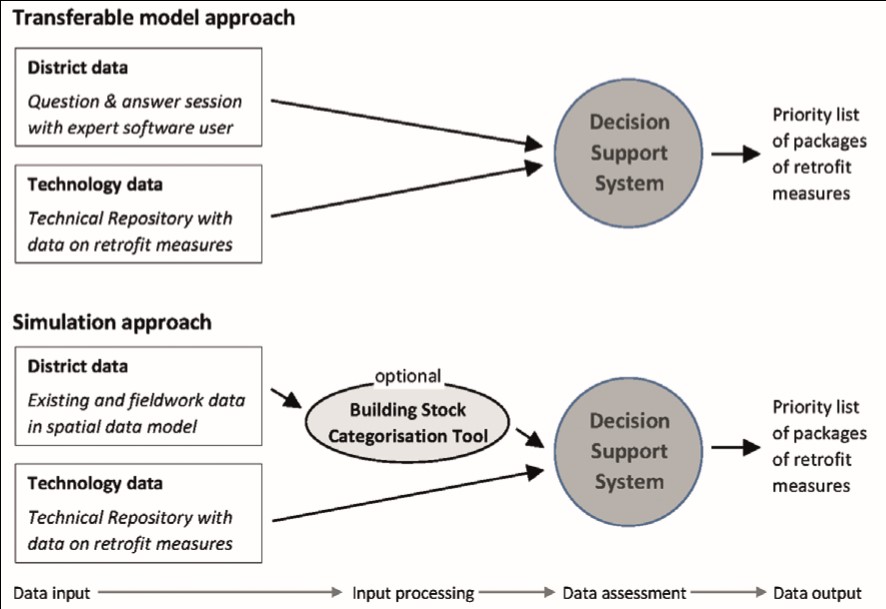 The DSS has been validated using three of the seven real-world case studies in the EFFESUS project. (The other four case studies were used to test the building fabric retrofit measures developed by EFFESUS.) To reflect the priority that is attached in the project to heritage significance, these three urban districts are all world heritage sites.

The first site is the historic district of Via Garibaldi in the town centre of Genoa (Italy), one of the most impressive examples of urban residential planning in Europe, and symbol of the city’s economic and financial power in the 16th and 17th centuries. Here the study of the city’s existing data showed a low level of available information. For this reason, the urban district was selected for the validation of the DSS using the transferable model approach.

The second site is the medieval old town of Santiago de Compostela (Spain), composed of many narrow winding streets lined by historic buildings in the surroundings of the cathedral. Santiago already had a rich database of the buildings in this historic district, stored in a geographic information system. Hence it was possible to develop a multiscale data model without extensive fieldwork, and the district was selected for the validation of the categorisation tool and the DSS using the simulation approach.

The results for Santiago demonstrated:

The third site, Visby, located on the island of Gotland (Sweden), is an example of a north European medieval walled trading town. It preserves a townscape and assemblage of high-quality historic buildings that graphically illustrate the form and function of this type of urban settlement. The city is representative of many historic city centres in Europe where the building construction types and heritage significance parameters set limits to their energetic performance.

Visby already possessed a comprehensive inventory of the buildings in the historic district. This enabled the development of a multiscale data model and DSS validation using the simulation approach, leading to Reference results similar to those for Santiago de Compostela.

A further component of the EFFESUS research project has been research into options for renewable energy systems at the scale of historic urban districts, employing technologies that are not feasible at the scale of individual buildings, such as combined heat and power plants and district heating systems. Visby is an example of the latter, where a biomass-fuelled hot water distribution network has been installed below the city centre’s streets, serving most buildings in the town. Supplied by wood chip burning plants sited outside the historic district, it offers an excellent example for a self-contained small town served by surrounding land and forests.

The EFFESUS project has brought together 23 partners and seven cities across Europe, working jointly for four years with a multi-dimensional and transdisciplinary approach. As a result, a new generation of methodologies, technologies and tools has been developed to support the adaptation of historic environments to modern requirements. The Decision Support System, comprising a methodology for evidence-based diagnosis and decision-making, is one of the key results. This software tool is supported by multiscale 3D city models with the objective of assisting decision makers to select suitable sustainable strategies for historic urban districts. 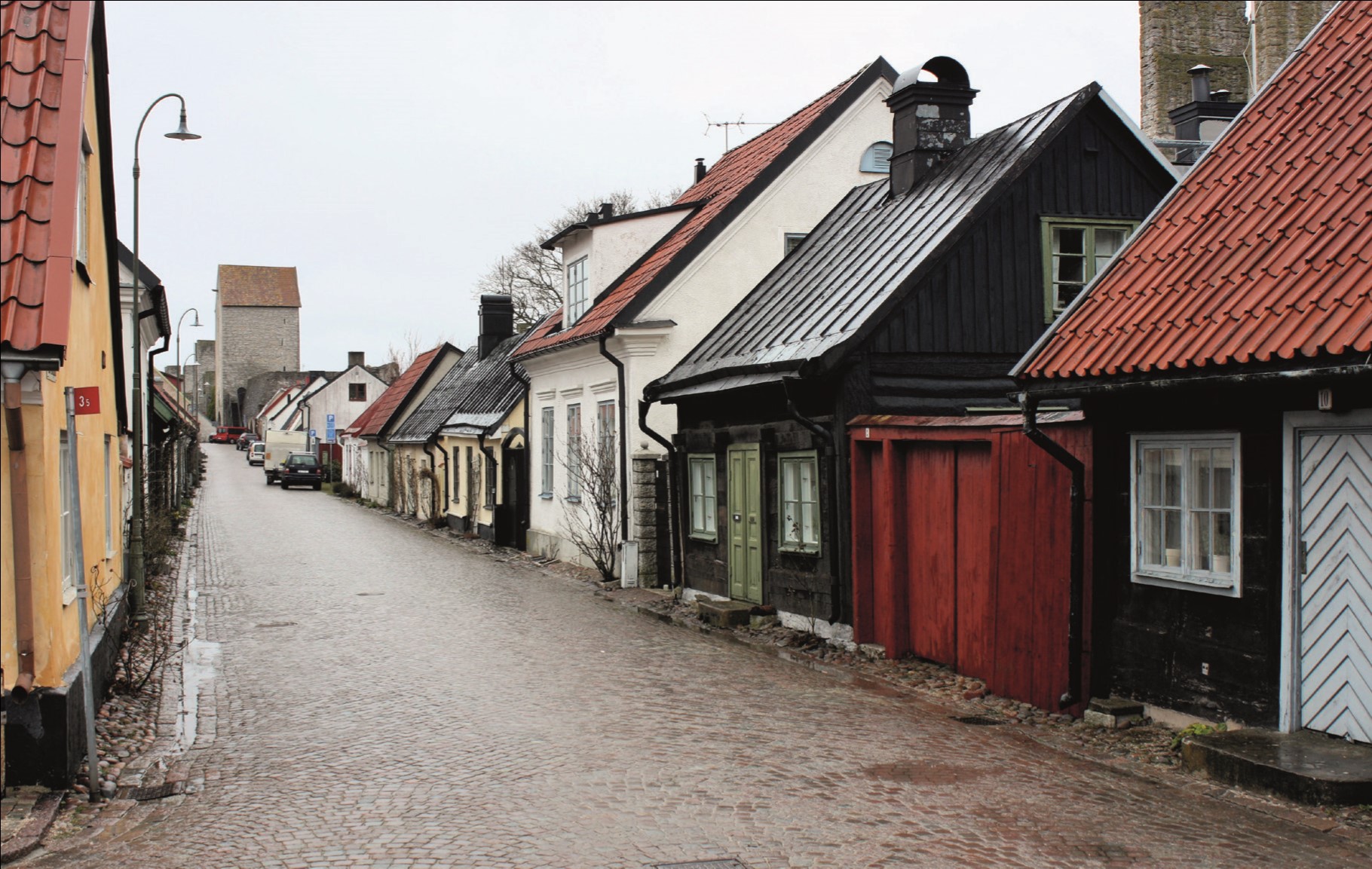 [Image: Wooden buildings next to the city walls at Visby, Gotland, Sweden]

[1] The EFFESUS research project receives funding from the European Union’s Seventh Framework Programme for research, technological development and demonstration (FP7) under grant agreement 314678. This article reflects the authors’ views and the European Union is not liable for any use that may be made of the information contained in it.

Aitziber Egusquiza is a researcher at Tecnalia Research and Innovation Foundation, Spain.

Carsten Hermann is a technical advisor and researcher at Historic Environment Scotland.

Dennis Rodwell is an architect-planner and consultant in cultural heritage and sustainable urban development in the UK.

Retrieved from "https://www.designingbuildings.co.uk/wiki/Decision_support_for_energy_improvements"
Create an article