A carbon neutral contract is a business arrangement between two parties that requires the contractor to fulfil its obligations within the contract – whether architectural design, construction or grounds maintenance – whilst cutting the carbon emissions produced and offsetting any unavoidable emissions.

This type of contract has gained interest in the private and public sectors. It is important to understand that the size of such contracts and the impact they make can vary significantly.

From a small scale grounds maintenance perspective, employing two people to look after green space around a six-store retail development without generating carbon emissions is a modest target that should be easy to achieve.

At the other end of the scale is the example of a street cleaning and grounds maintenance contract with a local council. Covering a significant amount of public space over a large area, this carbon neutral contract could contribute to the client’s efforts to achieve its own carbon neutrality targets.

Carbon neutral contracts are not about ‘greenwashing’; they focus on taking meaningful, genuine action to meet measurable environmental targets. Despite increasing global attention on achieving net zero, a November 2020 poll by consultancy South Pole indicated that only 10% of companies have drawn up science-based targets to deliver their emission reduction ambitions.

Some of the organisations that have placed greater emphasis on sustainability within their corporate strategies have done so by adopting green policies. This may include measures such as switching to a green energy contract, stepped-up recycling, low-energy lighting, improved human resources policies and better insulation. While these measures may result in quick and easy gains, additional climate-friendly initiatives may be more difficult to find.

Achieving additional carbon reductions may push some organisations to look beyond their own operations. This could include seeking innovative measures - such as carbon neutral contracts - from their consultants and contractors. Some of these measures can permeate through the supply chain - particularly during the procurement process.

Architectural contracts, tender submissions and long-term development agreements may have elements ‘over and above’ the immediate work required, such as clauses around community schemes or the creation of public spaces. This opens up different possibilities in terms of achieving carbon neutrality.

To maximise results, carbon-neutral contracts are generally longer and provide a secured income to offset against investment. Significant reductions in carbon output for the client, alongside long-term security for the contractor, create a mutually beneficial relationship that makes environmental and commercial sense.

Saul Huxley, Organic Development Director, idverde says that discussing the theory of carbon reduction is one thing but actually achieving it in a carbon-intensive sector like grounds maintenance is another. 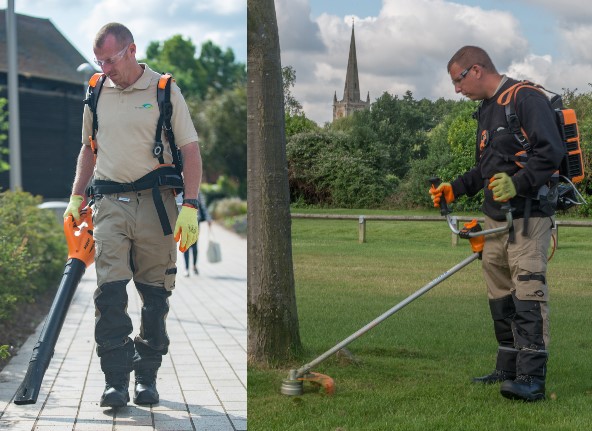 Huxley credits improvements in technology for the company’s ability to pursue carbon neutral contracts with clients.

He says, ‘Manufacturers such as Stihl, Husqvarna, Mean Green, Pellenc and Bosch are pioneering new battery-powered equipment which allows green spaces to be managed without traditional petrol motors. We are also utilising technology to work increasingly to meet needs, rather than just adhering to the scheduled frequency of rotas (whether the work is necessary or not). We use low-emission vehicles, GPS mapping, drone site inspections, robotic mowers, laser cutting, alternative weed control and artificial technology which enables proactive, preventive steps based on footfall and actual requirements – all contributing to our collective net-zero carbon goal’.

Huxley says, ‘Carbon neutral contracts can help us set genuine, achievable standards which will enable us to make a far reaching and lasting impact, developing a culture and approach that will permeate throughout the economy’

This article was written with input from Saul Huxley, Organic Development Director, idverde.

Retrieved from "https://www.designingbuildings.co.uk/wiki/Carbon_neutral_contract"
Create an article