This article was originally published as 'Beating bin blight' in the Chartered Institute of Architectural Technologists (CIAT) AT magazine in Spring 2016.

Given the detailed attention that is paid to the design of new houses, it can sometimes seem as if insufficient attention is given to how bins for domestic waste and recycling are accommodated on housing developments. The National House Building Council (NHBC) advises on how to tackle the problem of ‘bin blight’.

Evidence suggests that finding a suitable space for domestic waste and recycling storage is a common problem for many households. Whereas there may be limited opportunity for addressing this issue for existing houses, in the case of new build there is scope to design to accommodate bin storage and collection from the outset. Successful design brings benefits both in terms of reducing visual impacts but also of improving convenience for people living in new homes.

For generations the typical British dustbin was a relatively compact 90 litre steel container. The widespread adoption of larger wheelie bins alongside the introduction of a variety of additional bins, boxes and bags for storing waste for recycling has not been without its problems. Uppermost amongst these are the difficulties households face in accommodating all these bins and containers.

Terraced houses are particularly affected where there can be restricted access or no access to the rear of the property; the narrow frontage and limited front garden space can also impose constraints.

Accommodating the bins and other containers within the curtilage of the home is not the only problem. The second challenge is where bins are placed on collection days so that they are accessible for collection – making sure that they do not get in the way of pedestrians and road users is an equally important issue for the designer.

The starting point for storing waste and recycling is that each house will have its own bins and other containers, and that they will be accommodated outside of the house. Communal storage is likely to be more appropriate for apartment buildings.

The second challenge is where bins are placed on collection days so that they are accessible for collection. Making sure that they do not get in the way of pedestrians and road users is an equally important issue for the designer.

Ideally bins should be stored alongside each other and sufficient height should be allowed so that lids can be opened fully without having to pull the bins out. Other containers (boxes, bags, etc.) should be stored without stacking, either located alongside each other or on shelves for ease of access and use. Storage should be well ventilated to allow for the dispersal of odours and preferably located in the shade to keep the inside temperature cool (Figure 3). It should also be located away from windows, ventilators and extractor fan terminals to prevent odours from entering the house. A lockable door should be provided to prevent tampering.

For most detached and semi-detached houses there is likely to be sufficient space to locate bin storage in the rear gardens. However, doing so without careful attention can have a detrimental effect in terms of visual impact and utility, for example, presenting health and safety risks to children and pets or making the use of gardens for relaxation and dining less appealing.

Responding to these challenges, some house builders have begun trialling the use of modular designs for bins to be put out of sight. Bin stores are constructed in various sizes to accommodate local requirements for the storage of waste and recycling bins. The stores can also allow for discrete storage of other items such as bicycles.

[Image: Some examples of ‘bin blight’ on relatively recent housing developments in the north of England.]

Always check planning policies for features such as minimum garden depths or maximum carriageway widths. Are there local requirements for the provision of bin storage? Consider the frequency and type of bins collected in the area.

[edit] Use of available space

Providing adequate space for the required number of bins will be a greater challenge on densely-developed sites, particularly where there are a lot of terraced houses. Consider the integration of waste and recycling storage from the earliest stages of the design.

Aim to locate communal waste and recycling storage so that it is accessible and convenient for all houses and integral to the development’s street scene and circulation routes.

Consider what happens on bin collection days. Provide appropriate hard standing areas to the front of buildings for bins to be left before and after bin collection. More space may be required when different types of waste and recycling are collected on the same day.

Give thought to how the design and materials of bin stores integrate with the design of the houses on the development. Use materials that will look good for years to come.

Local authorities’ collection strategies may change over time. Try to design storage that is adaptable to future requirements and can accommodate additional bins.

Consider what residents and visitors will see as they approach the houses. Think about the appearance of the development on collection days. 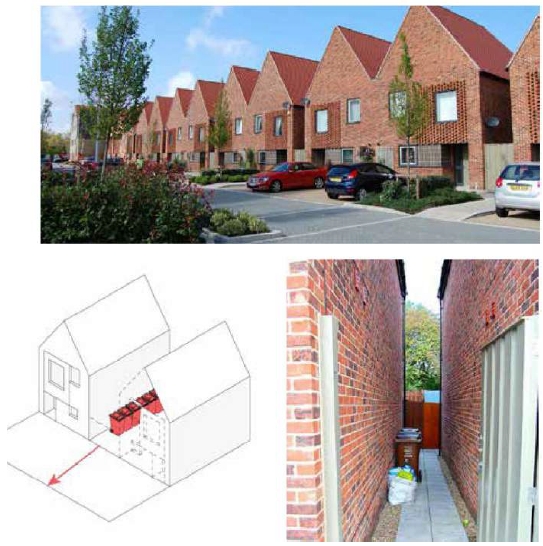 [Image: Horsted Park, Chatham. Bins are stored between semi-detached houses and hidden by a gate, which also adds security.] 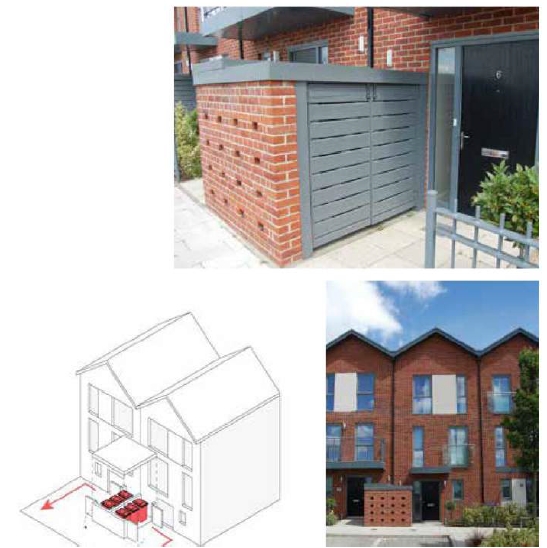 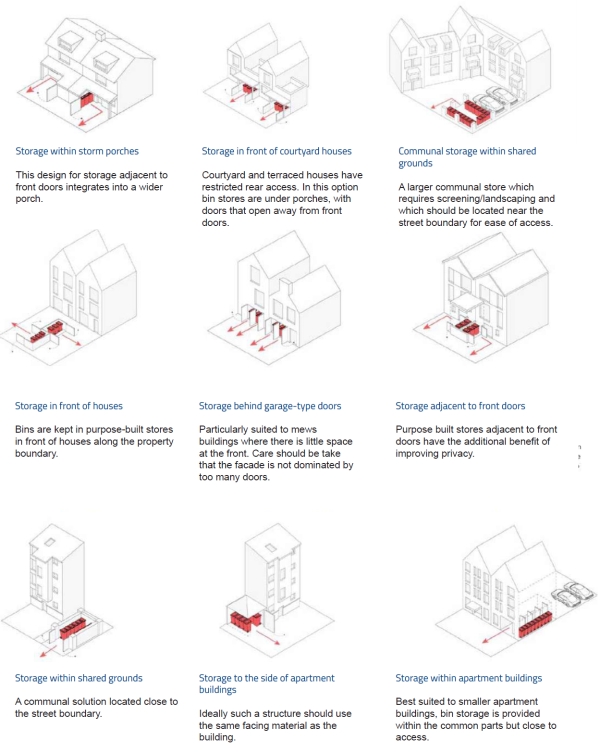 The prevalence of the ‘row house’ in much of Northern European town planning, and the use of long unbroken terraces for whole town blocks, rules out the use of multiple bins as a workable option. As a result countries such as The Netherlands developed, and then popularised, the use of underground cassette storage systems which are usually located within parking areas. Locating them in the parking areas allows heavy vehicles to collect bins without disturbing residents.

Underground bin storage systems have been used in London since the late 1990s when Tower Hamlets pioneered their use for waste collection in apartment developments. A major advantage of underground storage is that of space compared with conventional storage at ground level.

Underground bin storage systems generally have more capacity compared with the even larger 1100-litre ‘Euro’ bin. Using these systems also reduces the number of collections and the number of vehicles needed by the local authority.

A study produced for the London Plan consultation in 2014 highlighted that 1100-litre bins were typically using around 280 m2 of space at ground floor level in apartment buildings. The implications are that four extra family-sized apartments could be built from space savings; there is also the benefit to the local authority and neighbourhood of reduced waste and recycling traffic. Bins are out of sight, thus also out of mind. Recycling provision in community hubs interspersed within the development can also be incorporated.

Peterborough waste authority has recently installed several underground bin storage systems in residential areas of the city, primarily in areas of low-rise flats and higher-density housing. The local authority is adopting this as the preferred method of waste collection in new urban developments, promoting its use over standard bin compounds. Underground bin storage has also been proposed in Edgbaston for a range of housing densities including detached housing. 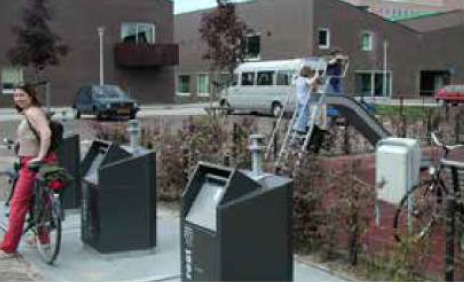 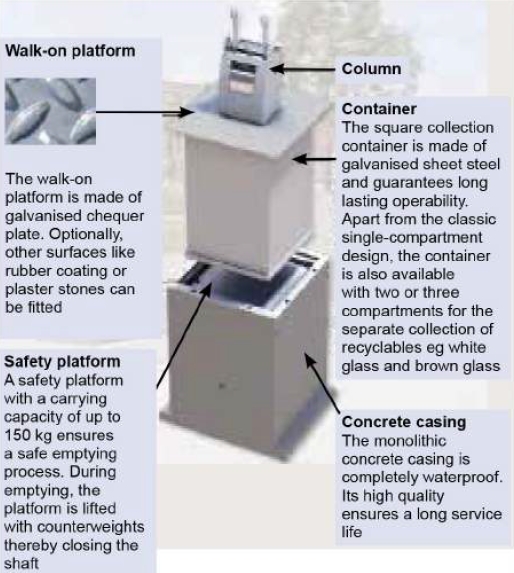 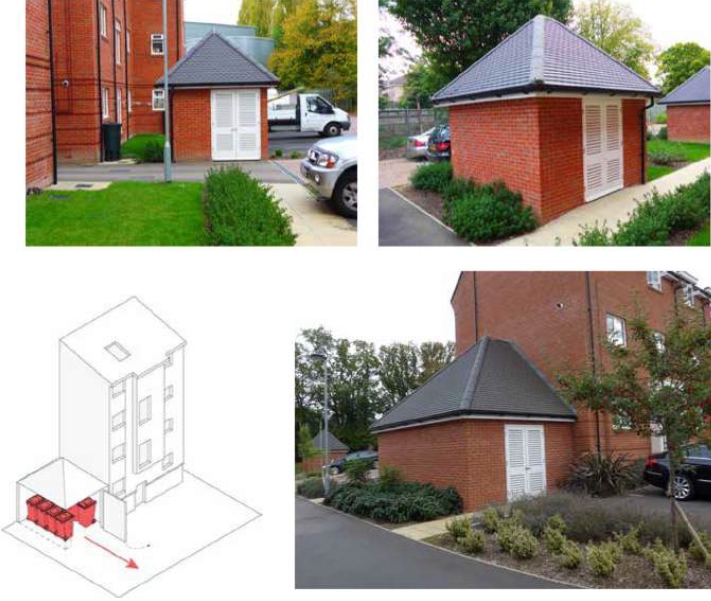 [Image: Stubwick Court, Amersham, Bucks. Communal storage has been attached to, or provided close to, the apartment buildings. Their presence is downplayed by dividing bins between a number of similar structures, with one built to offset the blank flank wall of the apartment building. Landscaping also softens the presence of the bin storage.]

Retrieved from "https://www.designingbuildings.co.uk/wiki/Bin_blight"
Create an article