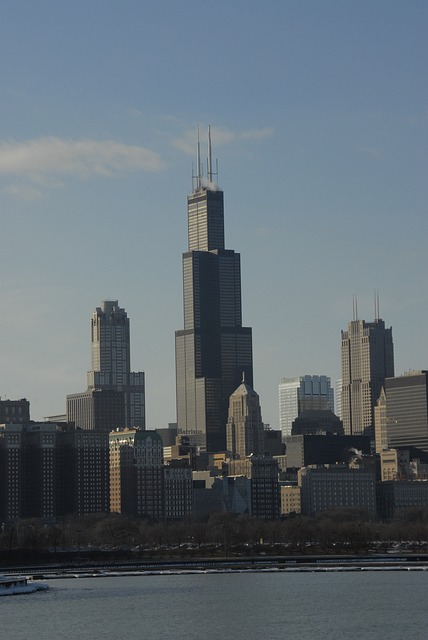 Willis Tower, popularly known by its former name Sears Tower, is a commercial skyscraper located in Chicago, Illinois. At 108-storeys and 442 m (1,451 ft) in height, it was the tallest building in the world from its completion in 1973 until it was surpassed in 1998 by the Petronas Twin Towers.

The skyscraper is currently (2016) the second tallest in the United States, behind One World Trade Center in New York. However, the Willis Tower remains the tallest in the US in terms of roof and highest occupied floor.

With its black aluminium and bronze-tinted glass exterior, and multiple set-back levels, the tower has become symbolic of Chicago. Its use of pioneering structural engineering systems made it very influential on subsequent skyscraper designs.

The observation deck, Skydeck, is located on the 103rd floor and is a popular tourist attraction, with more than 1 million people visiting each year. 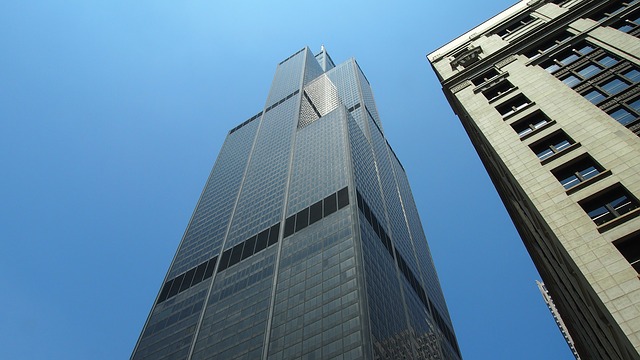 In 1969, Skidmore, Owings & Merrill (SOM) were hired by the retail giant Sears Roebuck and Company to design a new 3 million sq. ft office building. The Chicago location was chosen for its logistical ease for employees, in close proximity to expressways and commuter rail lines.

They used a bundled tube system, grouping nine square tubes together, connected as a single unit. Each of these tubes was essentially a separate building, clustered in a 3x3 matrix to form a square base with sides measuring 69 m (225 ft).

The structure of the tower is laid out as follows:

Not only did this structural system provide greater strength and stability, since the tube height variations disrupt the wind force on the building, but it was also economically efficient in terms of cost per unit area.

Louvres are wrapped in black bands around the tower, allowing ventilation for building services equipment, as well as obscuring the structure’s belt trusses. 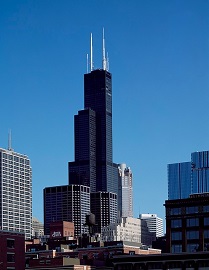 Although the tower was an engineering triumph, as a commercial entity it experienced more mixed fortunes. Sears were unable to fill the tower with as many office tenants as they had anticipated, which exacerbated their general decline over the 1970s as they lost market share. An abundance of office space was erected across the city during the 1980s, and the Sears Tower stood half-vacant for many years.

In 1994, by which time the tower was one-third vacant, Sears sold it to AEW Capital Management, and moved all of their commercial operations out of the building by 1995.

In 1997, the Toronto-based TrizecHahn Corp paid $110 m to purchase the building. In 2003, they surrendered the building to the lender MetLife.

In 2009, the London-based insurance company Willis Group Holdings took out a lease for more than 140,000 sq. ft of office space, and as part of their contract, purchased the naming rights for 15 years.

In July of that year they changed the official name of the building to the Willis Tower. However, it is still commonly referred to as the Sears Tower and the renaming has been referred to by US media as one of the worst rebranding exercises in recent years.

In 2015, the Blackstone Group completed their purchase of the tower for an estimated $1.3 billion. At the time this was the highest price ever paid for an American property outside New York City. The owners are reported to be considering several plans for site developments.

As well as being a prominent feature on the Chicago skyline, and a popular tourist attraction, the tower has featured in several films and TV shows, such as ‘Ferris Bueller’s Day Off’, ‘I, Robot’, ‘Man of Steel’, and ‘Transformers: Dark of the Moon’.

Retrieved from "https://www.designingbuildings.co.uk/wiki/Willis_Tower"
Create an article