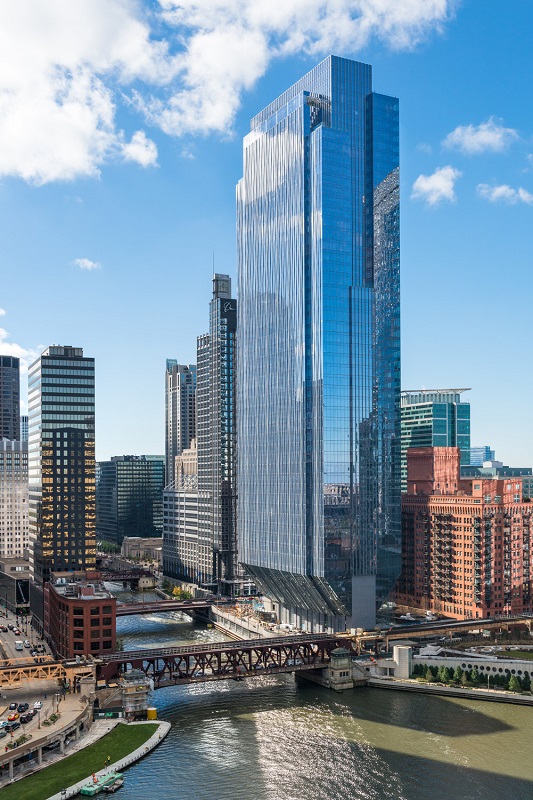 In April 2017, a striking new commercial tower was completed in Chicago. 150 North Riverside is situated on a prominent waterfront site in the city’s West Loop.

The tower is remarkable for the way its 54-storeys are built on a base just 17 m wide, with the floors cantilevering out from the central core. It is also the first time Grade 70 steel has been used in the USA.

The design solution, by Goettsch Partners, was necessary as the tower is next to active train tracks to the west and the Chicago River to the east. The core-supported structure has a 20:1 height-to-base ratio, which allowed the incorporation of a public park with circulation routes, outdoor seating and an amphitheatre with views over the river. The tower’s first ‘full’ floor is on level 8, 30 m (100 ft) above the plaza. 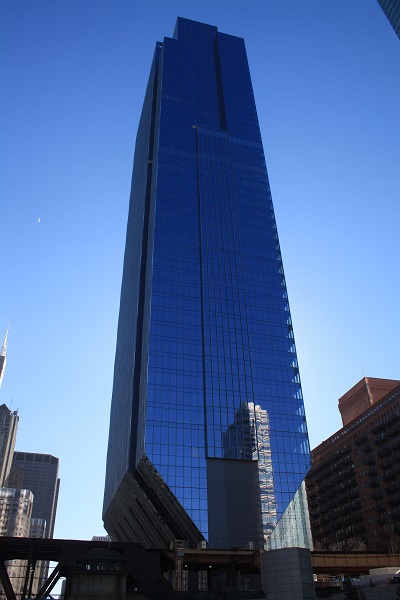 Vertical mullions along the tower’s east and west facades create a pattern of light and shadow that changes throughout the day. The north and south facades are divided into three vertical planes, stepped forward and back to provide outdoor terraces and to accentuate the tower’s slenderness.

The tower was designed to achieve, and has been pre-certified as LEED Gold, with ample natural light and open spaces, and an extensive green roof. It has also been certified Wired Platinum for its telecommunications infrastructure.

At the ribbon-cutting ceremony, the Mayor of Chicago said:

Retrieved from "https://www.designingbuildings.co.uk/wiki/150_North_Riverside"
Create an article