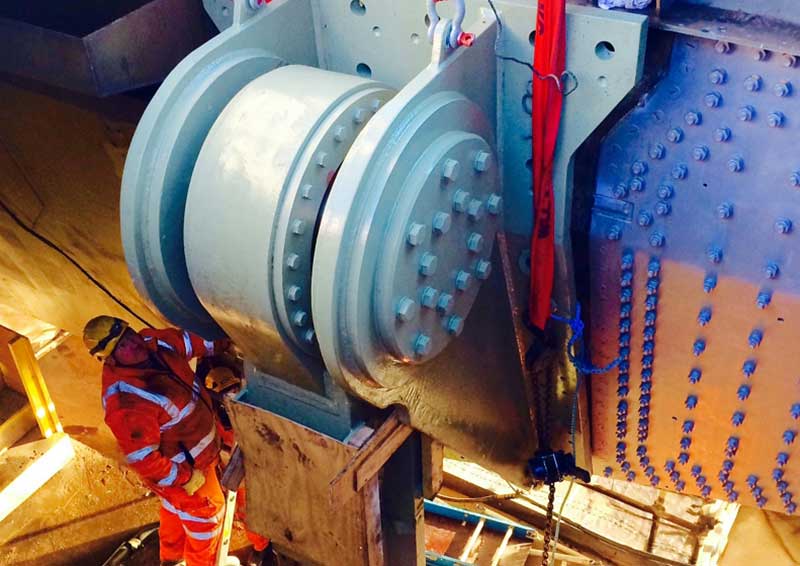 Prolonging the life of infrastructure saves money and saves the planet – but often not with the cost and significant disruption. Fitting new rocker bearings to the UK’s massive Humber Bridge without stopping traffic shows it can be done.

Britain's 2.2 km long Humber Bridge carries the A15 dual carriageway over the Humber estuary between Hessle in East Yorkshire and Barton in North Lincolnshire. Opened in 1981, its 1,410 m suspended main span it made it the world's longest single-span bridge until 1997 – and it's still in the top 10.

The 4.5 m deep main-span deck box are supported at the suspension towers on four steel A-frame rocker bearings, which carry up to 1,600 tonnes each and allow longitudinal movement of the deck. Routine inspections showed the bearings on these A-frames were wearing prematurely and at risk of seizing.

Following design pioneering by employer and Humber Bridge Board's designer, Arup, it was decided the main span's A-frame rocker bearings should be replaced with an innovative system of vertical pendels and horizontal wind shoes – and that the bridge should remain open to traffic throughout the whole of the works.

The award-winning project, which included fitting temporary pendels to allow the A-frames to be removed, involved threading 1,600 tonnes of specialist steelwork and bearings into a confined environment directly under live traffic and 30 m over water.

Contractor C Spencer Ltd started on site in July 2013 and successfully completed the work exactly two years later. The full story of the challenging project is published in the latest issue (169 CE3) of the Institution of Civil Engineers' journal Civil Engineering.

Project manager Michael Nichols says that despite a well-defined design being prepared prior to tender, the extremely tight constraints on site – including restricted space, the need to keep the bridge open throughout and a number of elements of the existing bridge not being as originally assumed – meant that a collaborative approach was required to resolve the issues encountered.

The contractor was therefore engaged under ICE's collaborative-style NEC3 Engineering and Construction Contract, with Arup retained as NEC project manager and supervisor.

According to Nichols, NEC facilitates a collaborative approach by bringing together the expertise of the contractor and the employer's designer while maintaining clear lines of responsibility. The early warnings process meant outcomes could be managed to minimise costs, enabling a mutually cooperative approach to resolving issues.

"Under NEC, changes to the contract were generally quick and simple to resolve as the contract clearly identifies where risk lies. Generally the process for agreeing compensation events worked well too."

This article was originally published here on 28 July 2016 by ICE. It was written by Simon Fullalove.

Retrieved from "https://www.designingbuildings.co.uk/wiki/Keeping_Humber_Bridge_moving"
Create an article