How can cities become more resilient?

Mike Woolgar, Water Strategy Director of WSP asks, does our emphasis on efficiency in cities result in unintended reduced resilience?

When I set out to write this blog, the world was a different place. That was only four weeks ago but so much has happened since then. My original theme was to address how the resilience and excellence of cities might be defined and how former US Army General, Omar Bradley, gives us some insight into weaknesses in the armour. Now, I see the need to discuss the difference between efficiency and resilience.

The OECD defines resilient cities as the result of four different drivers: economy, governance, society and environment. Given that history has shown an apparently unstoppable change from predominantly rural living to predominantly urban – as shown by UN data – we need to consider how resilience can be achieved.

Of course, the many reasons why this has happened have been researched and reported on almost since the beginnings of the ancient Greek city state, but I will simplify this into 'economic opportunity'. People without title to land have tended to migrate to the cities to earn money, seek their fortune, take a bite from the ‘big apple’.

And while only a very few get rich, undoubtedly urban living has been one of the main drivers of economic growth since the Industrial Revolution. Access to jobs, services, markets, the growth of utilities and health services, housing and physical and financial trade are all concentrated at city nodes.

Cities have been likened to 'engines of growth' and like engines, they need fuel and other inputs, whilst also having wastes which need dealing with and require maintenance. Cities also have inefficiencies in conversion of 'fuel' to 'value'. 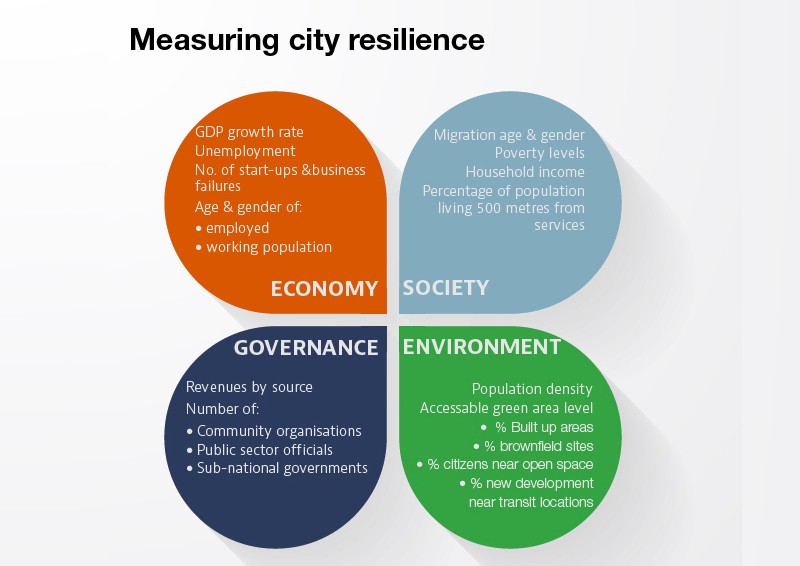 In the recent past, work has begun on making the engine more efficient – to improve output – and on reducing the impacts of wastes – to reduce environmental, health and social damage. Most cities have grown so fast that they are effectively unplanned and so efforts have been made to impose some order often after constructing a particular type of infrastructure. Examples of this include improving internal transport links, strengthening waste management, increasing communications and IT connectivity, all of which are essentially efficiency improvements.

But to what extent does efficiency translate to resilience? The 'fuels' that are needed for the city engine are multiple and complex; human capital, raw and manufactured materials, energy sources, food, water and sewerage services, intellectual capital, education and health systems, physical and cyber security to name just a few.

The provision of these fuels, and the management of wastes, maintenance of systems, and improved efficiencies, are delivered by a range of service providers from public and private bodies with a range of objectives. While these organisations generally plan well at an individual level, there is obviously potential for a mismatch of levels of service reliability; a difference of view as to what is critical and what is vulnerable, and different time horizons for investment in maintenance or capacity. All of this of which can lead to an unforeseen lack of 'system slack', or headroom, in a city’s function.

Since there is no one entity co-ordinating all of this and ensuring that weaknesses in supply chains, services, financial and trade flows and utilities are operating both efficiently and effectively within the context of emerging vulnerabilities, this leaves real operating resilience somewhat in the wind. Efficiency can support resilience, but it can also be the enemy in certain circumstances. The logistics of running large and growing cities are complex and apparently largely outsourced to 'others'. One solution could be to build in a mechanism for oversight, perhaps learning from the 'war gaming' approach used by the Army and some sectors – to assess how events might unfold and how well the city system responds.

As General Omar Bradley is reported to have said: “Amateurs talk strategy and tactics, professionals talk logistics”. Are our logistical failings damaging our ability to manage our resilience?

This article was originally published on the ICE Civil Engineer Blog on 14 April 2020. It was written by Mike Woolgar, Water Strategy Director of WSP.

Retrieved from "https://www.designingbuildings.co.uk/wiki/How_can_cities_become_more_resilient%3F"
Create an article