A cantilever is a beam supported only at one end, with load carried over the overhanging. This is in contrast to a simply-supported beam, which is supported at both ends. 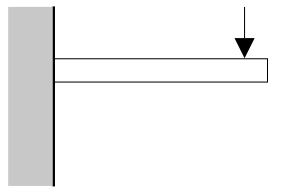 Cantilevers provide a clear space underneath the beam without any supporting columns or bracing.

Cantilevers became a popular structural form with the introduction of steel and reinforced concrete. They are used extensively in building construction, notably in:

Cantilever cranes (otherwise known as 'hammerhead crane') are hoisting cranes with a swing or fixed cantilever along which a hoisting trolley moves. They are often used in shipyards and during the construction of tall buildings.

Retrieved from "https://www.designingbuildings.co.uk/wiki/Cantilever"
Create an article