On 1st September 2016, Designing Buildings Wiki attended a panel discussion at The Building Centre as part of the Adaptive Structures exhibition.

Designing strength into buildings to prevent collapse has been the underlying tenet of structural engineering since before the ancient Egyptians built the first pyramids. A second fundamental principle, which appears in all modern design codes, is to build structures that are stiff enough to prevent excessive movement and deformation under statistically-calculated worst-case loads, such as high winds, heavy snow, large crowds, and so on. This is not really a question of safety, rather it is about the usability of structures and the comfort of the user, termed ‘serviceability’ requirements.

Ed McCann, director of Expedition Engineering, and Gennaro Senatore of University College London, began by explaining their recent collaboration on adaptive structures, which unlike conventional structures, can successfully change their shape to prevent excessive movement under load. They claimed that super-slender structures could now be created that use much less material, less whole-life energy and achieve very high levels of performance. But the question remains as to whether this is practical in the real world?

Senatore explained how he developed a high performance structure that was capable of counteracting loads actively by means of actuators, sensors and control intelligence. Using these methods, a full-scale prototype was developed, in the form of a very slender space truss with embedded sensors and actuators, which performed successfully as predicted.

He explained that the control system architecture was designed with the primary aim of identifying the response to loading in terms of internal forces and displacements for the structure. This allows the prototype to control itself without user intervention or predetermined knowledge of the external load.

He discussed how the prototype could be adapted to structures such as portal frames, arch bridges, doubly curved vaults, spatial trusses, exoskeleton structures like The Gherkin, and so on. 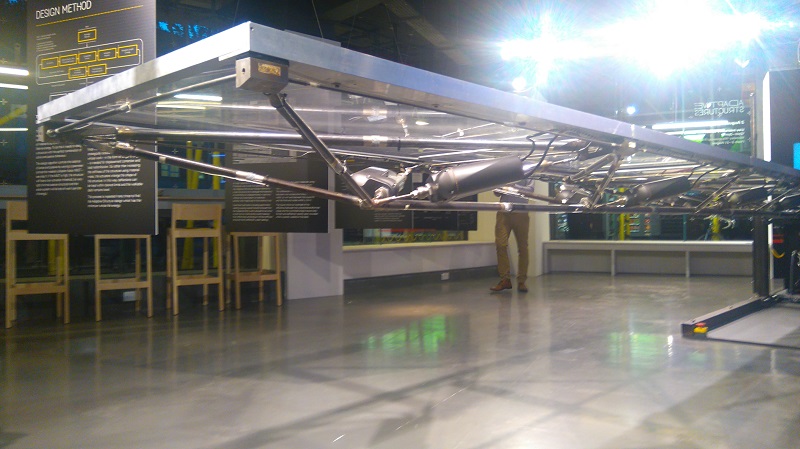 This degree of slenderness is not possible with conventional structural solutions (a ratio of 12:1 might be expected for conventional trusses, and 20:1 for conventional steel beams). This could allow for slender structures to be built in limited space, whether due to refurbishment, architectural desire, constraints on height, or limited footprints for tall buildings.

The structure consists of 45 passive steel members and 10 electric linear actuators strategically positioned within diagonal members which are under tension. The structure is designed to support its own (dead load) weight (102kg including actuators and cladding), plus a live load of 100kg at the tip of the cantilever. 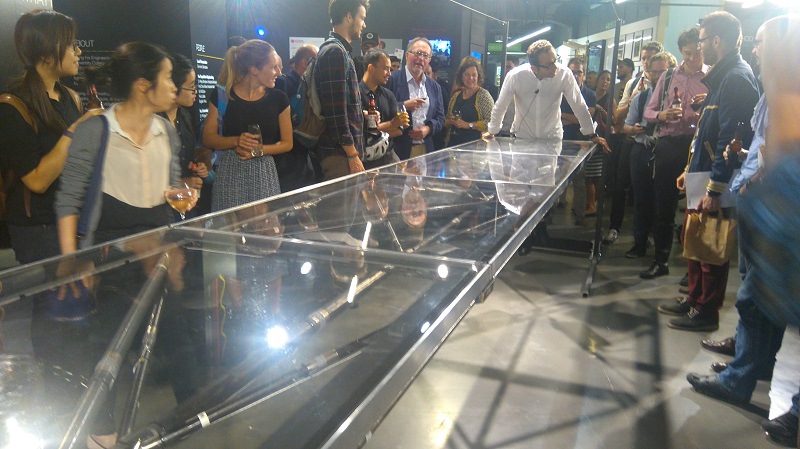 The frame is fully instrumented to monitor stress in the passive members, the deflected shape, and the operational energy consumed by the active elements. The passive steel members in the truss have been sized to prevent collapse, but instead of adding more material, a state-of-the-art control system governs the more onerous requirements of deflection and movement. Due to the fail-safe nature of the actuators, if the power is cut, the actuators simply stop moving with no compromise of load carrying capacity.

In order to validate the performance of the prototype, load tests were carried out by placing weights ranging from 10kg to 100kg at the cantilever tip. The operational energy use was measured by monitoring the power being consumed by the actuators and the control hardware during load/displacement control.

The total energy (embodied + operational) of the prototype was then benchmarked against that of two equivalent passive structures. The first structure was made of two steel I-beams; the second was a truss designed using state-of-the-art optimisation methods. The adaptive truss achieved 70% total ‘whole-life’ energy savings compared to the I-beams, and 40% compared to the passive truss.

Retrieved from "https://www.designingbuildings.co.uk/wiki/Adaptive_structures"
Create an article