A cluster of villages within walking and cycling distance was the winner of a competition to find innovative ways to transform the vital Cambridge-Milton Keynes-Oxford growth arc. Two of its creators discuss their approach. 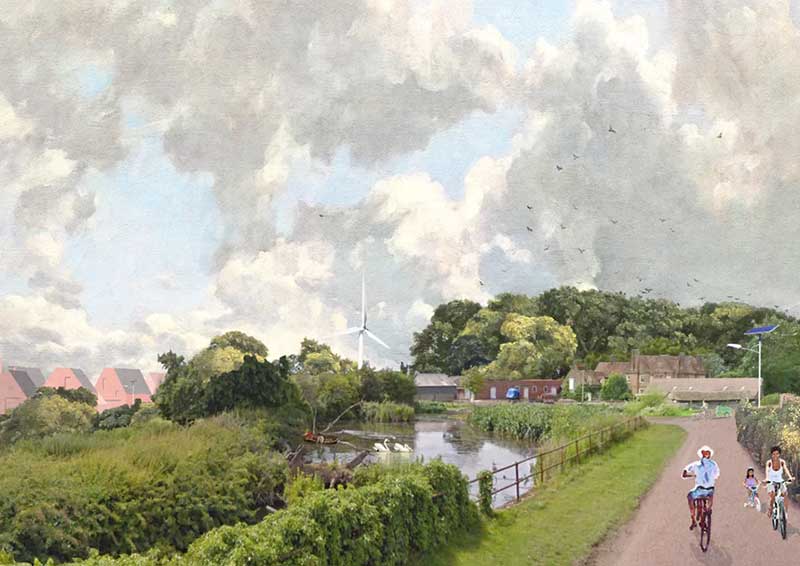 In its first ideas competition, the National Infrastructure Commission (NIC) invited teams to submit concepts for delivering a million homes in the Cambridge to Oxford arc by 2050.

The Cambridge-Oxford Connection: Ideas competition encouraged people from across the infrastructure sector to submit their ideas for delivering homes and improved transport connections across this economically important part of the country.

What was novel about the competition was the focus on placemaking, a concept which is often woefully neglected in the development of infrastructure plans. Transport planning at a national scale also tends to focus on the big ideas – the high speed train, Crossrail, the channel tunnel – rather than the more granular infrastructure approaches to local development plans.

As part of the winning team, announced in February 2018, ‘VeloCity’ set out to inspire the creation of livable and sustainable places for the long-term by looking at the close-up infrastructure detail.

We were concerned that the new rail nodes planned for East West Rail would bring both increased car traffic to surrounding communities and sprawling rural developments with a devastating impact on the local landscape. At the same time, we saw how these communities were struggling to survive, with a desperate need for affordable housing.

We wanted to explore how investment in strategic rail and digital infrastructure could enable growth in rural communities and offer opportunities for sustainable living.

Our response was to put cycling at the top of the local movement hierarchy, supported by shared mobility services.

Our proposal includes an extensive cycling network based on local bridleways linking existing communities to principal stations on the proposed East West rail line, a major project to establish a strategic railway connecting East Anglia with Central, Southern and Western England. Inspired by similar approaches in the Netherlands (RijnWaalpad), this is a low cost network which creates the environment for cycling to become the preferred choice.

Importantly, much needed digital infrastructure can be easily integrated into the cycle track, promoting local rural economies. Pushing cars to the edge of communities also offers new ways of thinking about how we live, using the space released to create safer and healthier places.

Our proposal includes careful integration of new homes around existing village structures. We are densifying villages based on historic development patterns with a well-designed housing mix to support new social infrastructure and provide affordable family homes.

We have also identified former farm buildings which would create fantastic low cost business units. Supported by digital infrastructure, these would help stimulate local enterprise. This may seem small beer but scaled up the approach has the potential to deliver some 300,000 homes across the corridor, playing a significant role alongside urban expansion and garden town approaches proposed by other shortlisted teams.

There is an assumption that communities are against any type of development. Too often infrastructure plans are unable to tap into the needs of communities, developments are imposed, and benefits are not aligned.

Our experience as planners, engineers and architects is that communities understand the need for growth and see the benefits it can deliver but are remote from inputting into the process that decides where and how.

We are turning planning on its head by putting people first – both in the design of places and how we deliver plans. We are proposing alternative governance and delivery models to create shared value with local communities.

The nature of development is inherently deliverable because it is lots of small-scale developments. This also creates the opportunity to build local supply chains, tapping into entrepreneurial SMEs and creating employment opportunities for local people.

By putting the bike first and placemaking at the heart of our VeloCity concept can attract a more diverse community including entrepreneurs that the NIC wants to attract to this knowledge corridor.

VeloCity is a multi-disciplinary collaboration between Jennifer Ross from Tibbalds, Sarah Featherstone of Featherstone Young, Kay Hughes from Khaa, Petra Marko of Marko and Placemakers, Annalie Riches of Mikhail Riches, and Judith Sykes from Expedition Engineering.

See the VeloCity concept and 3 other shortlisted ideas online.

This article was originally published here on 19th February 2018 by ICE. It was written by Kay Hughes and Judith Sykes.

Retrieved from "https://www.designingbuildings.co.uk/wiki/Cambridge-Oxford_connection:_Ideas_competition"
Create an article