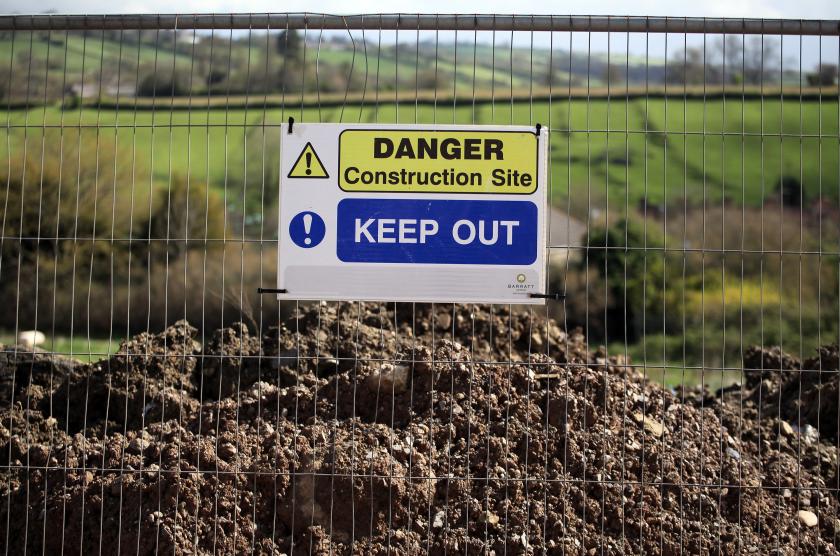 'Land which is or was occupied by a permanent structure, including the curtilage of the developed land (although it should not be assumed that the whole of the curtilage should be developed) and any associated fixed surface infrastructure.

'This excludes: land that is or has been occupied by agricultural or forestry buildings; land that has been developed for minerals extraction or waste disposal by landfill purposes where provision for restoration has been made through development control procedures; land in built-up areas such as private residential gardens, parks, recreation grounds and allotments; and land that was previously-developed but where the remains of the permanent structure or fixed surface structure have blended into the landscape in the process of time.'

In England, in 1800, just 10% of the population lived in towns and cities, now the figure is 90%. England is the third most densely populated major country in the world, and population is projected to increase to 62 million by 2035 (ref. ONS: Population Projections). In 2011, a report from the Institute of Public Policy Research warned of a housing black hole, suggesting that there would be a a shortfall of 750,000 homes by 2025 (ref. IPPR: England faces 750,000 housing gap by 2025).

This puts land under considerable pressure for development, and yet urban areas have vacant sites with hoardings around them, unused buildings with broken windows, closed-down shops, factories and warehouses and car parks sprawling across waste ground. Meanwhile there is new building on open ‘green’ land at the edge of almost every town and city.

The Environment Agency suggests that 'concentrating development on brownfield sites can help to make the best use of existing services such as transport and waste management. It can encourage more sustainable lifestyles by providing an opportunity to recycle land, clean up contaminated sites, and assist environmental, social and economic regeneration. It also reduces pressure to build on greenfield land and helps protect the countryside.' (Ref. Environment Agency: Position Paper 2003).

In 2009, local authorities identified 61,920 ha of previously-developed land in England that might be available for development (ref. Homes and Communities Agency).

In 1998, in order to combat urban sprawl, and make better use of derelict sites, the UK Government set a national target for 60% of all new developments to be built on brownfield land. In 2006, PPS3 re-stated this commitment, making clear that local authorities should 'take stronger action' to bring brownfield land back into use, and in 2010, it was estimated that 76% of new dwellings were built on previously-developed land (ref. BrownfieldBriefing).

In June 2010, PPS3 was revised, removing gardens from the definition of brownfield land, to prevent what it characterised as 'garden grabbing' (ref. Parliament: Briefing Papers).

However, The National Planning Policy Framework (NPPF) published in March 2012 did not include a specific brownfield target. Rather it encouraged '...the effective use of land by reusing land that has been previously developed (brownfield land), provided that it is not of high environmental value...’, leaving local authorities to ‘…consider the case for setting a locally appropriate target for the use of brownfield land.’

The NPPF also permits ‘…limited infilling or the partial or complete redevelopment of previously developed sites (brownfield land)...' within the green belt '…which would not have a greater impact on the openness of the green belt and the purpose of including land within it than the existing development.'

In an interview on BBC2’s Newsnight in November 2012, the then-Planning minister Nick Boles, suggested that more than 388,000 hectares of open countryside would have to be built on to meet housing demand. He said that 9% of England had been built on, but this needed to increase to 12%, "we’re going to protect the green belt – but if people want to have housing for their kids they have got to accept we need to build more on some open land". He only offered explicit protection for green belt land around towns and cities (ref. Telegraph: Government minister warns We must develop a third more land to meet the housing demand).

In June 2014, plans were announced that would give pre-planning approval for housing on brownfield sites. Local authorities will be required to introduce Local Development Orders (LDOs) for brownfield sites suitable for housing that will amount to the granting of outline planning permission. (Ref. Government initiatives to help build more new homes on brownfield land, 13 June 2014). It was suggested that this could provide up to 200,000 permissions for new homes by 2020

The then-Chancellor George Osborne said, "Local authorities will apply local development orders onto sites and we expect over 90% of suitable brownfield land to be covered by 2020." DCLG later clarified that local authorities would decide which sites should be subject to LDOs (ref. Planning Resource 4 July 2014).

On 28 October 2014, the government published figures which they said showed that, 'Following reforms of the planning system, more than two thirds of all homes are built on brownfield land.' (Ref. Brownfield sites to be prioritised for development.)

In November 2014, the Campaign to Protect Rural England (CPRE) and the University of the West of England (UWE) published From Wasted Space to Living Spaces, which reported that councils had identified capacity for at least 1 million new homes on brownfield land.

In July 2015, the government plan for growth, Fixing the foundations: creating a more prosperous nation, proposed introducing a new zonal system to give ‘automatic’ planning permission in principle on suitable brownfield sites.

On 4 January 2016, a £1.2bn fund was announced to prepare brownfield sites for the construction of starter homes in the next 5 years. This is intended to fast-track the creation of at least 30,000 new starter homes and up to 30,000 ‘market’ homes on 500 new sites by 2020. See Government to commission affordable homes on publicly owned land for more information.

In February 2016, housing charity Shelter published a report 'When brownfield isn't enough' in which they suggest, 'Building on some bits of the green belt should be an option, if done right. Smaller, controlled release of appropriate bits of green belt land could deliver substantial numbers of new homes.'

In November 2016, CPRE published figures reiterating its claim that brownfield sites across England could provide space for at least 1.1 million new homes, despite previous criticism by the government that this figure was ‘wildly over optimistic’.

Following trials in 2016, brownfield registers became compulsory for local authorities in April 2017. The registers mean local communities are able to identify local sites such as derelict buildings that could benefit from redevelopment, potentially attracting investment to the area.

However, on 11 December 2017, The Campaign to Protect Rural England (CPRE) published Brownfield: The Housing Crisis Solved, which suggested that brownfield registers were failing to record small plots that could deliver an extra 188,734 homes.

In March 2020, the government announced that it would launch a register of brownfield sites to map out unused land as part of plans to encourage councils to make the most of this land first, and this will be backed by £400 million to bring this mostly unused land back to use. Sound familiar? For more information see: Housing Secretary plans to get Britain building.

There are four main categories of a Brownfield land:

The Home and Communities Agency states that '...of the estimated 61,920 ha of brownfield land in England, 54% was derelict or vacant, while the remainder is in use but with potential for redevelopment.' (2009 figures)

Depending on whether there is contamination present, the preparation of brownfield land can be problematic and expensive. Problems include:

Depending on the previous usage of land, different types and levels of contamination can be found:

In more complicated cases, the history of a site might not be fully known and it may not be certain what chemicals may be present. Before development starts therefore, detailed research may be necessary, which can be time consuming and expensive.

Although some solutions are cheaper than others, the cost of site investigation and soil treatment is still significant. Developers suggest that it should be up to the government to cover the cost of cleaning up contaminated land, otherwise, the need to pass on costs to purchasers means that it will not always be possible to provide affordable housing on brownfield sites.

Is the green belt necessary protection to the countryside that prevents urban sprawl, or is it simply protection for industrial agriculture that creates a barrier to growth and intensifies cities resulting in overcrowding, poor biodiversity and local flooding?

The ex planning minister Nick Boules knows, that the only real way to ensure efficient use of land is to introduce Land Value taxation on "all" land.

A free planning system is essential. In short I we want to build anywhere it is up to others to convince that the individual application is not in-fitting.