Willowbrook Care Home, a Birmingham residence designed for older people with dementia and challenging mental health issues, was named Best New Care Home – Elderly in 2019. The judges were “impressed” pointing out that “technology is employed to good effect in allowing controlled but easy access” and that “excellent staff facilities have been incorporated into the design”.

Paul Burton said designing a care home for residents with these needs was “a real challenge”. Although care homes with a wing or part catering to those with dementia are increasingly becoming the norm, this, he said was a very different project and the idea was to create a modern feel.

Willowbrook has several features that set it apart. The client, Mr Burton said, “[had] very strong ideas of what he wanted to do… not the norm… he wanted to push the boundaries”. That certainly comes across in the design.

“It really is something that’s a bit different” he said. Space comes at a premium but has been made paramount in this project. Mr Burton explained that “one of the triggers [for challenging behaviour] can be people being on top of each other”. It was originally intended that there would be 35 bedrooms in the property, but this was reduced to 30. Wide corridors allow staff to respond if they are needed to assist with an incident.

Several aspects of the home were designed in consultation with potential residents’ families. Wayfinding has been achieved in a very different way using cast-iron street signs directing residents to different parts of the building. Families have helped to develop this concept and bedrooms have also been designed with their input. It was paramount that future tenants had “something they could relate to” and these interventions, it is hoped, will help achieve this. 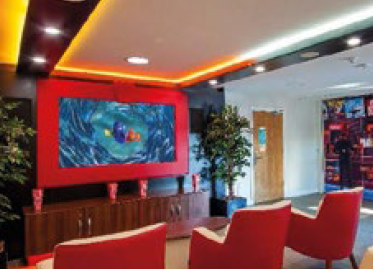 The building also houses an impressive cinema room which is used daily by residents. This features plush seating and film posters designed to give the room a sense of place as well as jog residents’ memories. It has a moveable wall and can become a function room – particularly useful if a family wants to throw a party for a resident.

Residents can relax in a range of settings. Bright and lively dining rooms sit alongside a quiet library area where audiobooks are played on a regular basis. Judges noted that the building’s “essential clinical structure is hidden behind an aspirational palette of colours, texture and subtle wayfinding cues”.

Willowbrook also boasts an impressive garden area. It includes a pavilion that acts as a barbershop, a food shop and a bar. There are post boxes and telephone boxes which it is hoped will trigger memories. It also has a rubber footpath which aims to mitigate injuries to residents from any falls.

One of the project’s significant challenges was that the site is right next to the M6. There was a significant noise problem. Windows were upgraded and rooms were fitted with acoustic ventilators. This had the welcome benefit of increasing energy efficiency levels for the building and was the biggest challenge, alongside making sure there were “meaningful places at the end of corridors” as part of the design. It was important to make sure there were no dead-ends for residents to deal with.

One constraint – from a planning permission perspective – was the building next door – which was designed by Mr Burton’s practice some years ago. He was proud of finding a workable solution that allowed the new residence to have a more contemporary look.

The home is packed full of technology. Every bedroom has doors controlled by a key fob. Residents’ families can have a key fob that lets them into the building and the residents’ room only. The key fob technology not only makes getting around simpler for residents but also tracks staff. It is “brilliant for keeping a record of what intervention is being put in place and what is taking place”.

The beds have infra-red detectors so that if a resident starts to get out of bed in the middle of the night, staff are alerted. Mr Burton said that these kinds of technologies are the future for care homes. He recently worked on projects with acoustic monitoring in the bedrooms which can inform staff if a resident is rousing in their sleep. Care staff can then calm them before they break their sleep pattern. One property features lighting that mimics the conditions outside and changes throughout the day accordingly. This helps keep resident’s bodies in sync with the changes in the day and aids sleep cycles.

What advice did Mr Burton have for aspiring architectural technologists keen to emulate his success? “It’s just work hard… do the best you can!” he said. Finding a niche or specialism, like care homes, is important. It is also important to ensure that people out there know you are good at what you do. “90% of our work is recommendation” added Mr Burton. That’s quite an accolade.

This article was written by James Evans, Communications & Digital Administrator at CIAT. It previously appeared in AT Journal (Issue 130, Summer 2019) and can be accessed HERE.

More articles by CIAT on Designing Buildings Wiki can be accessed HERE.

Retrieved from "https://www.designingbuildings.co.uk/wiki/Willowbrook_Care_Home"
Create an article