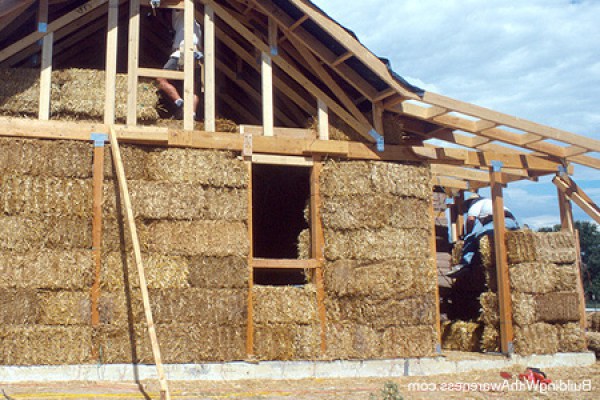 Straw bale construction is a method of building that uses bales (or bundles) of straw. Straw bales can be used as structural elements, insulation or both. The use of straw bales is typically found in 'natural' building projects, or earthen construction, and while historically it has been a common form of building material in many parts of the world, it has been received increased attention more recently due to its sustainable properties.

Two different types of straw bale are in common use:

The techniques used for straw bale construction usually involve stacking rows of bales on a raised footing or foundation. A capillary break or moisture barrier is inserted between the supporting platform and the bales. Pins made of bamboo or timber can be used to tie bale walls together, or surface wire mesh can be used.

The bale wall is then stuccoed or plastered using either a lime-based formulation or earth/clay render, depending on the local climatic conditions. For example, in wet climates, a vapour-permeable finish may be preferred to a cement-based stucco.

Straw bales can be designed to provide load-bearing structural support to a building, as well as lateral and shear resistance to wind and seismic loads. They can also be designed to serve as an insulation substrate, with a separate, load-bearing structural frame, typically made from timber. By building a skeletal framework first, a basic roof structure can be installed which protects the bale wall during construction when it may otherwise be at risk of water damage.

Some of the advantages of straw bale construction include:

Some of the disadvantages of straw bale construction include:

In 2014-15, the University of Bath undertook research into straw bale construction. They focused on ’ModCell’ panels, which are prefabricated panels consisting of a timber frame infilled with bales, with a breathable lime-based render. They found that straw bale construction provided healthier living through higher levels of thermal insulation and humidity regulation.

As a result of this, the first straw houses offered on the open market went on sale in 2015. The seven houses, located in Bristol, were built-clad but with timber-framed straw bale walls. The purchase price was below average, and it was estimated that fuel bills would be up to 90% cheaper than an equivalent brick-built house.

Peter Walker, from the University of Bath, said:

”We have conducted a number of fire tests that have demonstrated that fire resistance from straw bale construction is remarkably good and better than many contemporary forms of construction.

”In terms of durability, we have undertaken laboratory tests and undertaken monitoring of existing buildings and we have also done accelerated weather tests. The results of all these tests suggest that straw is a very durable construction solution.”

It would be good to have some references for the claims about fire performance, or at least some details about the kinds of tests that have been done. All that straw provides a lot of combustible material: I would certainly want to be very sure that the claims above about fire resistance are well-founded before encouraging people to live in a straw-bale house.

Barbara Jones addresses this referencing tests conducted in Canada, US and UK. The conclusion was that properly compacted and covered with half inch plaster the wall does not contain "enough air to permit combustion." Barbara Jones 'Building with Straw Bales' ISBN 9780857842282 pp201-202