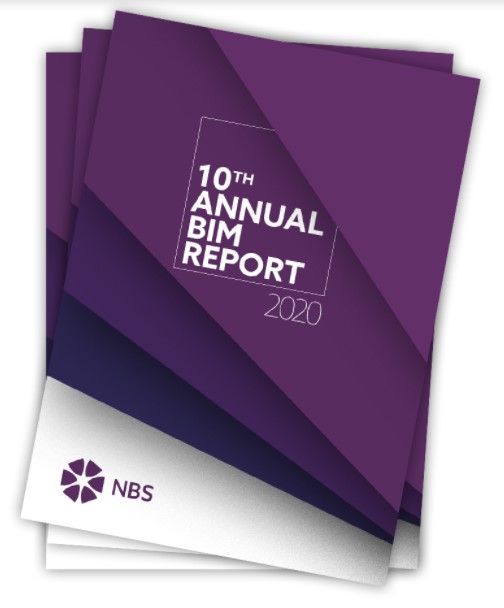 In 2010, NBS carried out its first survey into a new, emerging way of working: ‘building information modelling’. NBS has published the report on its 10th survey into BIM. Here are some highlights from the 2020 report, which show how the industry has changed during the decade.

NBS carried out an online survey between December 2019 and March 2020. Responses were from Architectural Technologists, architects, BIM specialists, engineers, other consultants, contractors and project managers, amongst others. All organisation sizes were represented, as well as those doing private and public work, new build and refurb. People of all ages took part along with those in a range of design and information management roles. All UK regions were represented and some respondents were located outside the UK.

The first BIM Report, published in spring 2011, showed that 43% of survey participants had heard of BIM and 13% had adopted it. In 2020, 73% are now aware of, and using, BIM. The adoption figure was 66% for Architectural Technologists and (unsurprisingly) almost universal, at 98%, among BIM managers.

Almost a quarter (23%) of those ‘using’ BIM state that they do so on all projects (also 23% for Architectural Technologists and 24% for BIM managers). So, for some organisations, BIM is now ‘business as usual’ – but is that the whole picture? Probably not. Only 40% say that BIM is the norm for project information: 26% for Technologists and 61% for BIM managers. Plus, are those who say that they have adopted BIM actually doing so? This year, we explored this question further.

We have, in the past, found that some people associate BIM with simply creating 3D models when it is about much more than that. It involves managing information (including that in 3D models) in a consistent and collaborative way. Even now, we do find that some describe their overall approach to BIM as working with 3D parametric models (25%). Encouragingly, however, more people describe what they do as a process, working to an industry standard: either the BS/PAS 1192 series (37%) or the BS EN ISO 19650 series (26%). Unsurprisingly, the BS/PAS 1192 series is followed by a higher proportion of those in the UK. This includes UK-based Technologists (39%). BIM managers are most likely to have adopted BS EN ISO 19650: 45% of those in the UK describe their approach to BIM in this way, despite the standard being just over a year old.

[edit] BIM as a collaboration tool

As collaboration is a key aspect of BIM, sharing information in a consistent way is critical. There are frequent examples of this happening, with over two thirds (68%) following a naming convention for all information that is shared (6% among Technologists and 80% among BIM managers). While these figures show that BIM (as defined in the standards) is not happening on all projects all of the time, it is common.

Clearly, adopting BIM requires upskilling and gaining knowledge of these standards and processes. It requires substantial changes to workflows. So why do it? Over the years of carrying out this survey, the same benefits have continued to be recognised. In 2020, 71% of BIM users report that BIM has made them more productive, and just over half have experienced increased profitability.

These directly benefit the organisations involved, but BIM can aid the management of projects too. Most BIM adopters (85%) state that BIM increases coordination of construction documents, and 72% that it reduces the risks of problems arising. These figures are for those who have adopted BIM.

These benefits are also anticipated by many of those yet to adopt BIM (albeit not as many as those who already use it). Respondents to this survey have consistently agreed that BIM results in operation and maintenance savings: 74% in 2020.

Many of those who have taken the plunge with BIM are now experiencing its benefits. Almost two thirds of these anticipate clients insisting on BIM.

It is on projects for repeat clients, who have the opportunity to see its advantages, where survey respondents are most likely to use BIM. There is now a challenge to help others to experience these benefits.

While this survey shows that construction professionals are most likely to use BIM on private projects, especially new build, the driver for BIM came from the public sector with the UK Government’s mandate. It’s likely that BIM is most established on larger projects across both sectors.

What we hear from organisations carrying out smaller, often private work is that BIM is not suitable for their projects. Lack of client demand remains the biggest barrier to BIM (64%); 45% state that their projects are too small and 36% that BIM is not relevant. Other challenges (e.g. gaining the right expertise, financial cost) do remain significant, but there are signs that these are being overcome.

There is help out there. The UK BIM Framework (introduced by the UK BIM Alliance, BSI and the Centre for Digital Built Britain) provides guidance and information about the ISO 19650 series.

In the 2020 survey, 81% of respondents reported that they need manufacturers to provide digital objects, and many are doing so. There are a plethora of new tools to aid digitisation, and we have seen some significant shifts in the ways that people are working.

In our first BIM survey, none of the tools geared to creating 3D models were used by more than 10% of respondents. Now, Autodesk’s Revit is the main design tool for almost half of Technologists completing the survey, with 22% also using Graphisoft ArchiCAD.

There are a wide range of providers of common data environments, model checkers and viewers. At NBS, we are pleased to be part of this landscape of technology platforms, with 72% of Architectural Technologist respondents using it.

Recognising the trend toward cloud-based technologies, NBS introduced NBS Chorus. Since lockdown, we have seen the use of Chorus increase significantly.

When we collected data for the BIM survey, before COVID-19, respondents expected digitisation to change the industry, with 81% believing that it would transform the way they work. The COVID-19 crisis is likely to have accelerated this change. Other factors, such as the framework for building regulations (which requires a digital thread of information), are also likely to further drive the use of structured, well-managed information and the use of digital technologies in the construction industry.

The full report, which includes supporting articles from industry experts, is available from this link.

This article originally appeared under the title, ‘Tenth NBS BIM survey’ in the Architectural Technology Journal (at) issue 134 published by CIAT in Summer 2020. It was written by David Bain, Research Manager, NBS.

Retrieved from "https://www.designingbuildings.co.uk/wiki/NBS_National_BIM_Report_2020"
Create an article