Inquiry into the construction of Edinburgh schools view of the RIAS

Founded in 1916, The Royal Incorporation of Architects in Scotland (RIAS) is the professional body for Scotland’s chartered architects. 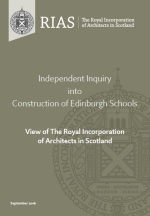 The Inquiry was commissioned by the City of Edinburgh Council following the collapse of part of an external wall at Oxgangs Primary School in 2016 and the subsequent discovery of defects at 16 other schools and a secure unit and community centre.

The defects were the result of poor workmanship and site supervision resulting in a failure to install wall ties and masonry restraints correctly. Professor John Cole, an architect from Northern Ireland, found there was a lack of proper scrutiny of the building work by the council and the Edinburgh Schools Partnership, and “…an over-reliance on the part of the council, without adequate evidence, that others in the project structure, including those building the schools would comprehensively fulfil this essential role."

In considering the underlying causes of the failures in Edinburgh, the submission prepared by the RIAS suggested that;

'Perhaps one of the most significant changes over the longer timescale of the past 30 years has been a revolutionary and systemic transfer of responsibility for leadership of the procurement process from construction professionals such as the architect, to other parties less involved with the design process. These would include project managers, contractors, contractor-developers and other special purpose vehicle types of consortia composed as entities for administrative and legal convenience….. In the case of project managers, these are normally isolated from the design development process, and consequently perform, effectively, merely as a communication hub, adding little value to the process.'

RIAS identified a number of ways in which the role of the traditional design team has been weakened:

As a result there has also been a drift to a self-delivery style of contract delivery and a tendency to outsource compliance monitoring to the contractor. The RIAS suggest that the Inquiry presents an opportunity to pause for thought and to consider the lessons which may be learned at a systemic level.

"When major inquiry reports are published there is a tendency for everyone to breathe a sigh of relief, mutter "well that's that dealt with" and move on. That should not be the case with this, extremely well researched and deeply concerning report. The message is simple and the responsibility of all commissioning authorities is clear."

In April 2017, an investigation by the BBC Scotland discovered that problems had been found in a further 71 schools across 15 council areas.

Prof Alan Dunlop, a fellow of the Royal Incorporation of Architects in Scotland said:

"The PPP financing process was not only used for schools, it was also used for hospitals and a number of public buildings, care homes, things like that. I'm wondering, if they found a similar problem in schools, are other things happening in other building type that have been used and building under PPP?"

On 21 June 2017, evidence to the Scottish Education Committee revealed that defects had been discovered at five more Edinburgh schools following inspections carried out in the wake of the Oxgangs Primary School wall collapse.

On 3 October 2017, the Scottish Parliament’s education and skills committee published the findings of its inquiry. It described the defects as “an embarrassment for the construction industry", suggesting that it “raises serious questions about the practices of contractors and sub-contractors that cut corners resulting in an unacceptable risk to children and the public in general”.

The convener of the committee, James Dornan MSP said “...it is shocking that some of the buildings we have been sending Scotland’s children to learn in have not been safe.

“Professor Cole’s report provides a clear path to how we can improve and learn from these past mistakes. It is vital that every public body, university and college learn these lessons and ensure that our buildings are safe.

“There needs to be a change in thinking in some local authorities. Responsibility for public safety must be taken seriously and it not something that can be contracted out.”

In April 2018, it was revealed that 19 more public buildings in Edinburgh had been found to have defects.

The report by the Accounts Commission found that '...of the 154 properties where assessments had been completed, 19 properties had been identified as having issues similar to those identified at Oxgangs School. Remedial work to address the defects identified on these buildings (which include schools, libraries, community centres and care homes) is ongoing.' 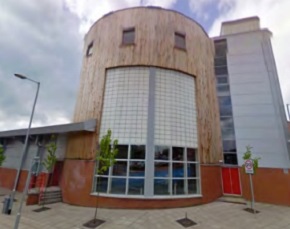 In May 2018, the official report into the contractor Kier's failings on the DG One leisure centre in Dumfries was published by the Dumfries & Galloway Council. As with the Edinburgh schools inquiry, the report highlighted the failings of design & build as a procurement route.

After a protracted dispute with Kier regarding the discovery of building safety concerns and construction failures, the council appointed Prof. John Cole to produce the report. Cole found that the same root causes were to blame as those he identified in his Edinburgh schools report of 2017 - the lack of independent professional scrutiny on behalf of the client and the failure of the contractor to 'adequately supervise and inspect the quality of the construction work.'

In particular, Cole identified the widespread inadequacies in the external masonry walls' structural integrity as well as the failure to incorporate essential fire-stopping measures throughout the building.

The recommendations of the report included the need for cooperation between local authorities and other public sector organisations in the form of a list of frequently occurring defects in new buildings so that they can be more effectively monitored and addressed prior to completion.