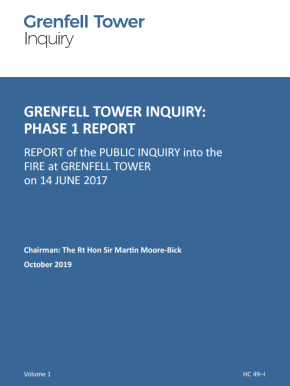 On 16 June 2017, Prime Minister Theresa May announced a Public Inquiry into the fire.

The Inquiry has been led by retired high court judge Sir Martin Moore-Bick and is in two phases:

Grenfell Tower Inquiry: Phase 1 Report. Report of the Public Inquiry into the fire at Grenfell Tower on 14 June 2017 was formally published on 30 October 2019. However, it was issued to the bereaved, survivors and residents on 28 October 2019. Recipients were asked to sign a non-disclosure agreement, but despite this, the contents of the report were leaked.

A post on the Inquiry website said: “The Chairman and the whole Inquiry team are very disappointed that someone has seen fit to disregard the confidential nature of the report during the embargo period. It is equally disappointing that media elected to publish what they would have been aware was subject to strict obligations of confidence.”

Although phase 1 of the Inquiry was not intended to consider the building itself, the report set out compelling evidence that the external walls of the building failed to comply with Requirement B4(1) of Schedule 1 to the Building Regulations. It suggests that: “The principal reason why the flames spread so rapidly up, down and around the building was the presence of the aluminium composite material (ACM) rainscreen panels with polyethylene cores, which acted as a source of fuel.”

Fire compartments then failed because:

In relation to the response of the emergency services, the Inquiry found that the London Fire Brigade’s (LFB’s) preparation and planning for such a fire was “gravely inadequate”, in particular:

In response to the report, General Secretary of the Fire Brigades Union, Matt Wrack, said: "The truth is that the fire spread the way it did because it was wrapped in flammable cladding. The firefighters turned up after that had happened, after the building had already been turned, in reality, into a death trap… Firefighters' actions on the night, which were remarkable in the circumstances, are now being scrutinised. Nobody is trying to avoid scrutiny, but we think that the ordering of the inquiry is completely back to front."

The Construction Leadership Council (CLC) said: "The CLC believes that as an industry, we must collectively play our part in eliminating this risk on both new and existing buildings. Collectively, we must support all actions that are being taken to reform the industry ahead of the completion of the 2nd phase of the enquiry (sic). The CLC fully supports the work of the MHCLG and industry bodies in taking forward the agenda set by Dame Judith Hackitt, to improve standards of competence, improve the system of building regulation and to ensure the safety of construction products, and are ready to play our role in the necessary reform of the industry’s approach to fire and wider building safety." Ref http://www.constructionleadershipcouncil.co.uk/wp-content/uploads/2019/10/Grenfell-Tower-Inquiry-CLC-Press-Release-30_10_19.pdf

Prime Minister Boris Johnson said: “Today, the whole country, the whole world, is finally hearing the truth about what happened at Grenfell Tower on 14 June 2017. For the survivors, the bereaved, and the local community, this report will prove particularly harrowing. Yet I hope it strengthens their faith in the inquiry’s desire to determine the facts of the fire – and in this government’s commitment to airing those facts in public, no matter how difficult they may be, and acting on them.”

The full report can be found at: https://www.grenfelltowerinquiry.org.uk/phase-1-report

Retrieved from "https://www.designingbuildings.co.uk/wiki/Grenfell_Tower_Inquiry_Phase_1_Report"
Create an article